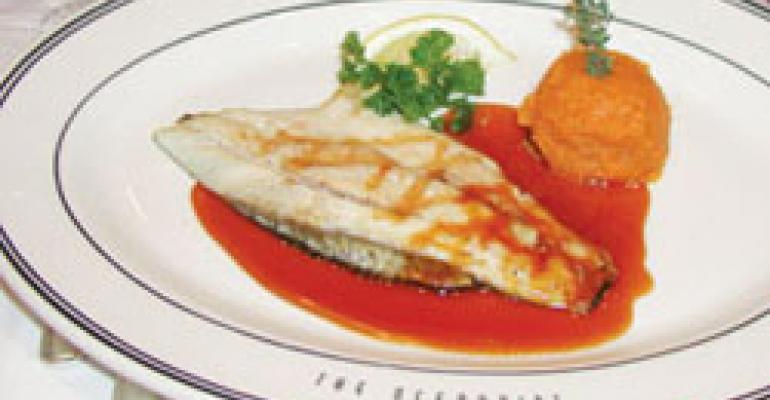 From a Christmas Eve seafood feast with an eye toward sustainability to a brunch with a focus on easing Champagne hangovers on New Year’s Day, chefs’ holiday menu promotions aim to drive restaurant traffic and sales by inspiring budget-conscious consumers to treat themselves.

Chef Rob Klink of Oceanaire in Washington, D.C., for example, is offering a Christmas Eve menu called the Sustainable Feast of Seven Fishes. As the name suggests, widely available seafood species will be featured, along with local touches. For $55 a person, seven different types of fish will be spread out over the four courses, starting with an amuse bouche of mussel chowder with Virginia smoked ham and ending with roasted Chesapeake Bay striped bass with braised cabbage and house-made apple butter.

Sustainability is an important issue for Klink, from both an environmental and fiscal point of view.

“One, it is great for the environment; two, it is good for business,” he says. “If we are not protecting the oceans, we will not be in business very long.”

With that in mind, Klink is using Australian barramundi in dishes for both the Christmas Eve feast and a New Year’s Eve menu. He says the barramundi he is using is farm-raised in Massachusetts by a company Klink says has a very eco-friendly outlook. It is a flaky white fish, similar to sole, that can be pan-seared, sautéed or roasted. On Christmas Eve, Klink will serve the barramundi with acorn squash risotto as a first course.

For New Year’s Eve, Klink has a three-course offering planned, priced at $85 a person, that uses much of the same seafood as the Christmas Eve menu, with land-based options as well. On both nights, the full dinner menu will be available as well. On New Year’s Eve the barramundi will be grilled and served with mashed sweet potatoes and maple-cider glaze. The menu also will offer a dish with sea bass from South Georgia Island, a region near New Zealand and Australia. Klink says that sea bass is certified by the Marine Stewardship Council.

Klink hopes the $55 price point for the Christmas Eve menu will draw customers.

“We’ve never opened up on Christmas Eve before.” Klink says. “It is something different. I wanted to make it accessible to everybody. It will probably be cheaper than if you had an appetizer, entrée and dessert off the menu.”

At blue on blue in the Avalon Hotel in Beverly Hills, Calif., chef Scott Garrett will be serving a prix-fixe menu for Christmas and New Year’s Eve, but it is a special brunch menu for New Year’s Day that he hopes will turn into a regular feature.

“Usually New Year’s Day is completely dead,” Garrett says. “It’s a ghost town, even if we have 100 people in the hotel.” Garrett is offering a Hangover Brunch for Jan. 1 from 9 a.m. to 3 p.m.

“Nobody really wants to get up and go downstairs to eat,” he says. “So it is going to be things that they like to eat. We are going to try to make it as interesting as possible. Maybe it could be something that could stick around for a while and be a huge success.”

Two dishes Garrett will be featuring are a breakfast quesadilla and an Italian version of a Mexican egg dish. Both dishes are priced at $12.

Garrett starts the breakfast quesadilla by preparing a potato, bell pepper, onion and jalapeño hash, tossing it with scrambled eggs and cheese and putting the mixture into a folded tortilla. He then puts the tortilla on a flattop to melt the cheese and grill-mark the quesadilla. He serves the dish with guacamole, sour cream and shaved Spanish ranchero cheese on top.

His Italian version of a classic Mexican dish of scrambled eggs with salsa, peppers, cheese and tortilla chips, will feature roasted red peppers, Italian sausage, scallions and a fire-roasted tomato salsa. To mimic the corn tortilla crunch, Garrett will take fresh sheets of pasta, cut them up and throw them on the flattop to crisp up.

“It’s kind of a play on a completely classical Mexican dish,” Garrett says. “Once you fold the pasta into the scrambled eggs, it will get softer, but it will be a completely different texture. And the edges will still be crispy.”

The New York-based salad concept Tossed has created an offering that will be available even once the holidays have passed. The Resolution Salad, designed to appeal to health-minded consumers during a time of year known for personal vows to hit the gym, eat better and shape up, will be available from Jan 5. to March 1.

Eric Clark, chief operating officer of the 14-unit chain, worked with two of his chefs to come up with the Resolution Salad, priced at $5.95 or $6.95, depending on the market.

The salad is made with hearts of Romaine, baby rocket or arugula, mandarin oranges with a little bit of their juice, jícama, diced tomatoes, sliced carrots, and slightly steamed sugar snap peas and mixed with the chain’s proprietary strawberry-balsamic vinaigrette.

Clark uses the slightly bitter arugula to provide a different note for the Resolution Salad.

“With salads nowadays, the lettuce is the base of consistency, but it never has great flavor,” he says. “We are fans of arugula.”

Clark and his team are going for the healthful angle to capitalize on guests who want to turn over a new leaf, so to speak, as 2009 gets underway, but he was intent on giving consumers a good deal as well.

“It’s the lowest-calorie thing we got out there, “he says. “We kind of tossed the food costs thing away. We took some expensive ingredients. I said, ‘Let’s not calculate the food costs until we are done.’ If we lose money, it is all about giving back.”

Additionally, the restaurant is holding promotions in different markets throughout the week of Jan. 5-8, in which the Resolution Salad is free for a single day, and all the proceeds from other sales that day go to the stores’ favorite local charities.

For some restaurateurs, however, it’ll be business as usual during the holidays.

Marc Murphy, chef at Landmarc in New York, says he sticks to what he does best, rather than try to squeeze people for every last dime by offering only a special, multi-course menu.

“You come into my restaurant on New Year’s Eve at midnight, you can have a frisée salad with lardon, have a beer and you can go home,” he says. “I am not going to put the screws to you and make you buy a six-course menu and a full bottle of Champagne and charge you 500 bucks.”