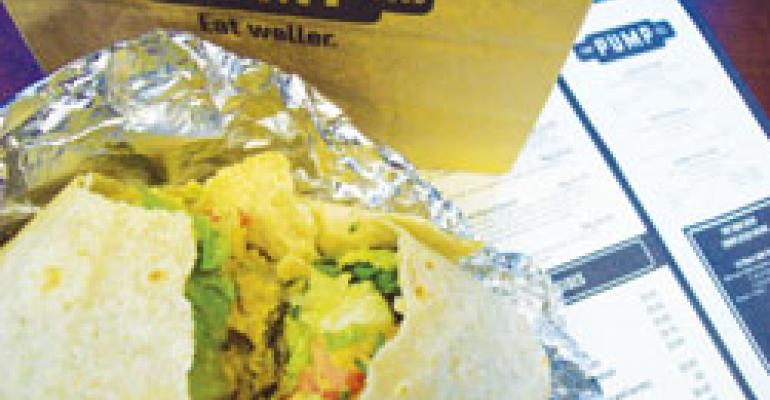 Operators are embracing hummus as a way to add bold taste to menus and keep a healthful bent. Offered as a dip with pita bread, a spreadable condiment in sandwiches or wraps, and as a nontraditional side for a fine-dining entrée, the chickpea concoction’s low food cost, simple prep and versatile flavor makes it popular in the kitchen and on the plate.

David Kostman is one of the owners of Nanoosh, a two-unit chain based in Manhattan that is billed as a Mediterranean hummus bar, opened in October of 2007, and offers basic hummus for $6.50, with options to mix toppings like fava beans and mushrooms, which costs $7.75. Kostman, originally from Israel, says the healthful profile and flavors associated with hummus can appeal to American palates. He says Nanoosh is not aimed at a specific ethnic group of diners.

“Our focus is really the mainstream U.S. market,” he says. “We think that it is a good concept for any large American city.”

“We make the hummus a few times a day,” Kostman says. “Every few hours there is a new batch, depending on how much traffic there is. It is not a huge amount of labor; you can keep up with demand.”

Nanoosh’s recipe for the Mediterranean staple is simple and classic: cooked chick-peas blended with lemon juice, olive oil and tahini, a sesame paste.

“The basic hummus is a very creamy, very traditional one,” Kostman says.

Many guests get mixed veggies or whole-wheat pita bread for dipping, but Kostman says you can add meat and make it a meal.

“If you buy the hummus with chicken, you can take a fork and just eat it,” he says.

At The Pump, a six-unit fast-casual chain based in Manhattan that focuses on healthful food, hummus is offered in wraps, sandwiches and salads or as a side with baked pita chips. Adam Eskin, chief executive of the chain, says that the Mediterranean roots of the menu, coupled with The Pump’s aim to serve nutritious food, makes hummus a no-brainer offering.

“The couple who founded the business are actually from Crete,” Eskin says. “A lot of our history and lineage and menu inspiration is rooted in that. That combined with the fact that we are in business to serve really healthy, fresh food…is kind of a nice marriage.”

Nicole Garfield, chef and in-house nutritionist at The Pump, says one of the best attributes of hummus is getting protein without any animal sources.

“The hummus is a great way to add fiber to our dishes,” she says. “It is also a good source of vegetarian proteins. It has healthy fats because it uses tahini paste and olive oil.”

Eskin says hummus as a condiment is important to the brand as a healthful alternative to other fast-casual or fast-food chains.

“It has a nice texture, a nice flavor for when you are not using a lot of sauces and dressing that maybe other [restaurants] can use because they are not in the healthy business,” he says.

Hummus is made in-house at each Pump unit, Eskin said. Dried chickpeas are soaked overnight, then cooked, combined with lemon juice, tahini, olive oil, spices and fresh garlic. Chopped parsley is mixed in as a final ingredient.

“When you have fresh parsley that is tossed in right before it is being served, it has a really nice impact on the flavor,” Eskin says.

The Pump offers both hummus and guacamole scoops as add-ons to dishes, such as wraps and sandwiches for $1.15 each. Eskin says the lower cost of hummus helps the chain make up for selling a scoop of guacamole at a lower price than most chains.

“I would say they offset each other,” he says. “We kind of get pretty beaten up on guacamole and the fact that the hummus is less expensive evens it out.”

At Elements, a new fine-dining restaurant in Princeton, N.J., executive chef Scott Anderson and executive sous chef Joe Sparatta came up with a spicy take on hummus using soybeans. They included it on a marinated tofu pita at lunch and a black sea bass entrée at dinner. Those items were on the menu in the spring.

“It wasn’t truly a hummus dish, it was more of a side,” Sparatta says. “It is just kind of an interesting play on a standard hummus.”

Sparatta says he would blanch the soybeans, to leech out the bitterness that raw ones would have and to preserve their color, and combine them with chiles, lime juice, tahini and lots of garlic in a high-speed blender.

“It is pretty vibrant bright green, as opposed to your standard looking hummus which is not always so attractive on the plate,” he says.

He served the hummus as a condiment for a $12 marinated tofu sandwich at lunch.

“Everybody liked it with essentially anything,” Sparatta says of the decision to work it into a dinner entrée. “People were dipping random things in it. It was a really tasty condiment. We were trying to do it as a complement to one of our entrées, so you want it to stand out a little bit. Also, it tastes good. If it tastes good, we’ll do it.”

The crispy black sea bass was served with tempura garlic scapes, snap peas and the spicy soybean hummus, for $32.

“We try to incorporate it into the dishes that we make, because we enjoy eating hummus,” he says. “Most everyone I know enjoys eating hummus.”

Fast-casual chain Daphne’s Greek Café offers hummus plain or with roasted red peppers with pita as an appetizer-style dip for $1. Daphne’s has more than 80 units in Arizona, California and Colorado.