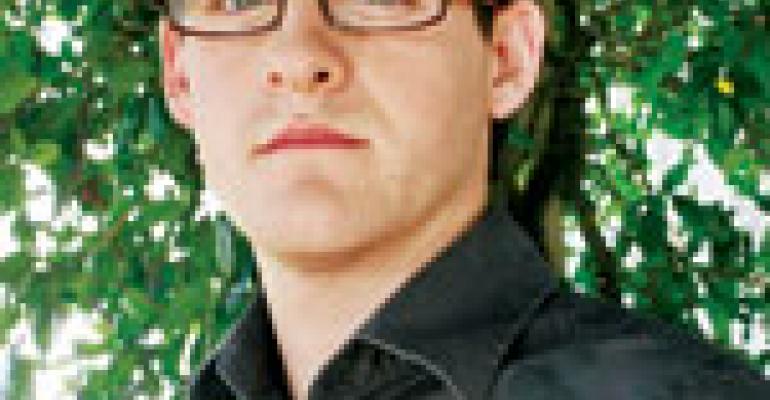 Having words with MATT PRESCOTT Assistant Director of Factory Farming Campaigns, People for the Ethical Treatment of Animals

Matt Prescott doesn’t work in the foodservice industry, but in the past few months he’s been a force behind major policy decisions at three of the industry’s largest quick-service chains.

The latest such development came last month when CKE Restaurants Inc., parent of Hardee’s and Carl’s Jr., said it would immediately begin purchasing 15 percent of its pork from suppliers that don’t confine sows in gestation crates. The company also vowed to increase that portion to 25 percent by 2009. Similarly, by next July, 2 percent of the eggs purchased by the company will come from cage-free hens. CKE also will give consideration to suppliers that explore and test controlled-atmosphere stunning systems, which animal-rights activists consider to be a less cruel slaughtering method.

The announcement comes several months after Burger King made a similar pledge to purchase cage-free pork and eggs and explore more humane killing methods for poultry.

How did the recent agreement between PETA and CKE come about?

We first approached them in 2004 regarding this issue, but after we became shareholders in 2006 they contacted us and wanted to discuss measures they could take to improve welfare. PETA flew to Hardee’s headquarters and sat down with CKE executives to discuss what they could do to improve the lives and deaths of the animals killed for Hardee’s. After many months of negotiations and discussion, the agreement was announced. PETA still wishes that CKE would add a veggie burger, maybe a “Veggie Thickburger,” but the progress they’re making in improving conditions for some of their animals is commendable.

What is PETA’s strategy in working with foodservice companies?

We try to find intersections of goals. Fortunately for the animals, there are often economic benefits to what we’re asking for. One of the strongest intersections is controlled atmosphere killing for chickens and turkeys. New systems expose birds while still in crates to a mixture of inert gases that essentially puts them to sleep quickly and painlessly. There’s no live dumping, no live shackling, no contact between workers and live animals. [That results in] increased product quality and yield, improved labor and lower contamination.

How do you respond to the perception by some in the industry that PETA is overly aggressive and adversarial?

We always try to work with a company first before taking it up a notch. We worked with KFC for many years behind the scenes through conference calls and e-mail before we launched our website and campaign. We only launched the campaign when it became clear to us that KFC wasn’t interested in making changes, but rather sticking to smoke and mirrors.

[But] even with companies we originally may have had an adversarial relationship with, like BK, we often are able to move past that and develop a mutually beneficial relationship. As long as a company is willing to show some progress, we’re more than happy to not target them.