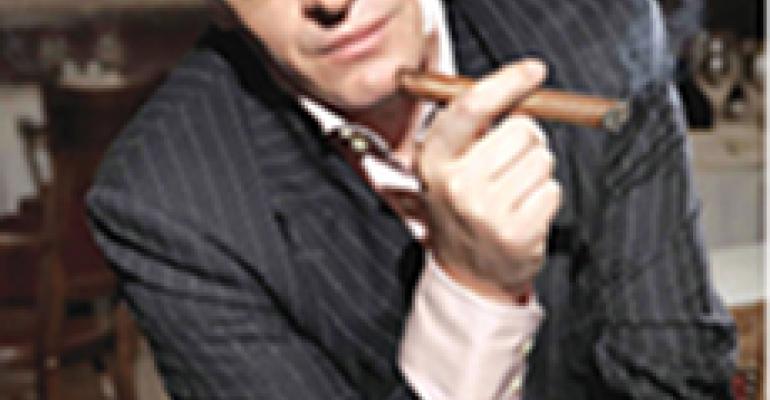 Hot-tempered, wild-haired, chain-smoking, triple-named and thrice-married, Marco Pierre White once was as famous for his fury as for his feasts. Heralding from working-class origins, White had a childhood marked by the death of his mother when he was 6, his father’s subsequent retreat into alcohol and gambling, and the suffering he endured at school as a dyslexic in a time when dyslexia was little understood. He learned to be tough, and it served him well as he trained in the kitchens of Albert Roux, Pierre Koffman, Nico Ladenis and Raymond Blanc. The likes of Mario Batali, Heston Blumenthal and Gordon Ramsay trained in his. Described by author Bill Buford as “the most charismatic chef of the 20th century,” White has mellowed with time. His book, “The Devil in the Kitchen,” chronicles his rise to fame with humility, honesty and a good dose of laugh-out-loud antics.

How was your U.S. book tour?

Fantastic. I love America, the people, the American dream. I buy into that. I like that there is no class system. Everywhere I go, I’m welcomed, treated very well. The book this morning was No. 7 in cookery on Amazon. What I’m doing right now is sharing my story. If my story inspires someone to do great things, to be a better person, then I’ve done my part for the industry. Maybe it will give some young chef an understanding of the commitment he has to make. Maybe it will help someone suffering from a childhood tragedy to unravel some of that confusion. People take many things out of a good book, I think.

How has the industry changed during your career?

When I started in the ’70s, it was [French chef Auguste] Escoffier’s world. It was a different world. You put your career in the hands of the chef and he looked after you. You went to work to learn your trade. There was no such thing as a celebrity chef, everything was seasonal, and everyone respected the “The Repertoire” [by Louis Saulnier]. Chefs didn’t stray from their stove.

Today’s different. Chefs put more importance on image, on being a star, a celebrity. It’s very political now, the industry.

Why did you decide to take Gordon Ramsay’s place on TV’s “Hell’s Kitchen”?

I declined three years ago, and last year. If I agree now, it has to be interesting, educational and inspirational. I want my emphasis to be on the food and the kitchen rather than the swearing. If they cry, it will be out of sheer joy or disappointment in themselves. I’m not there to belittle people.

Be their reason for turning up right or wrong, I want them to stay. I want them to enjoy it. I want people at home watching TV to think: “I want my children to go into that industry. It’s a wonderful industry.” And it is. It’s like the French Foreign Legion: It accepts everybody. Maybe I’m out of date, but I’m very happy to be out of date. Our industry needs an anchor. I’m happy to be that and to give people a glimpse into what it was. I do believe in life, if you’ve been given, you have a duty to give back; if you’ve had opportunity, you have a duty to create opportunity.

Earlier this year, Ramsay admitted that in 1988 he stole the reservations book from Aubergine and blamed you. You are now taking legal action. Any comment?

It was a malicious falsehood. But let us not forget, when you issue proceedings, it’s a declaration of war, so let us respect radio silence.

What has been your greatest life lesson so far?

I think my greatest lesson was when I retired from cooking. I did nothing for five years, apart from fish, shoot, stalk. I think that spending that time with myself allowed me to discover myself as a person.