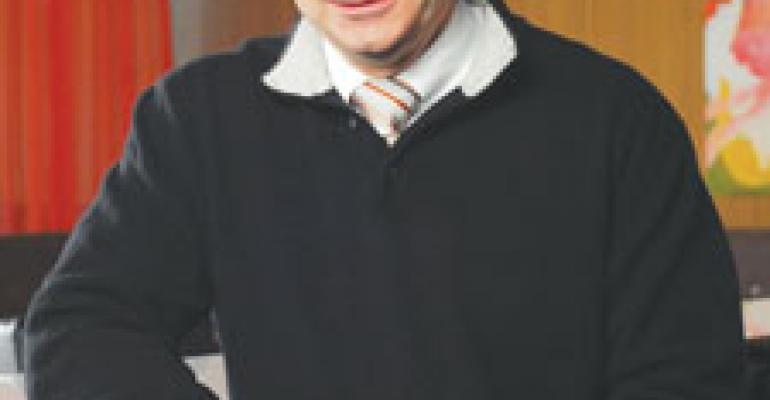 Chefs or restaurateurs often say that their foodie inclinations were first inspired in their mothers’ kitchens. But when asked, Roger Berkowitz, president and chief executive of the Boston-based, 33-unit Legal Sea Foods chain, will flat out explain that he didn’t get his prowess from his mom. No, it was another important female family member, his maternal grandmother, who passed on the culinary gene.

“It’s interesting, I think, that any culinary talent I have I got from my mother’s mother,” he says. “She was a great cook, just off the charts. Unfortunately, my mother did not inherit those same skill sets.”

He notes, however, that his culinary facility does not come from formal training. It’s more about an inherent instinct for tastes.

“What I’m good at is pairing flavors,” he says. “I understand flavors and the synergy between them. I know when it’s close and when it’s not there. For example, once, back in the 1980s, I was sitting down and thought I wanted some shrimp and a little rice and some broccoli. I thought we could put a little herb marinade on it and some cheese. And today it remains one of the most popular items on the menu.”

Berkowitz, a man with keen intelligence and a quick wit, has turned his family’s fish-selling business into an upscale dinnerhouse chain with more than $200 million in annual sales. Berkowitz stresses that the creativity and menu development are a joint effort between him and the rest of the team.

“Much of it is a collaboration,” he says. “We sit down and discuss [ideas]. Sometimes, I’ll have a brainstorm and call up the culinary team and say, ‘Hey, why don’t we try this?’ But no one has a monopoly on the best ideas. Everyone is free to come up with ideas. We’re always thinking; it’s always on our minds how we can put our spin on something that excites us. We never stop talking about the evolution of the menu. It’s absolutely ongoing.”

For Berkowitz, the sourcing of the products he serves is one of the most important aspects of his business.

“Certainly, at the end of the day, it’s all about the food; that’s very important,” he says. “In the fish business and in operating restaurants, that’s the sort of orientation I try to focus on. I’m really passionate about the sourcing of product. It has to be second to none. Then you have to get the right people to handle it.

“Our head of culinary, Rich Valenti, he’s also our executive vice president of operations, [and] really understands the entrepreneurial aspect of the restaurant business, having owned his own. We want to be known as a chef-driven restaurant company, and to do that, consistency and creativity both have to be there.”

When asked what it’s like to work for Berkowitz, Valenti good-naturedly says: “It’s maddening; just teasing. I’ve been with Roger for 12 years and executive chef for 10, and he’s someone who is from a family-run company and is feverishly involved in [the business]. He loves restaurants and food. He loves the people. He’s unique in that he gets excited if a guest comes up to him and says he or she is excited about what they just ate or drank as opposed to looking at a spreadsheet all day.

“Obviously, he’s the president, so he has to be involved in things on a higher level, but it’s not unusual for him to have opinions on food and food quality. Things get run by him on a regular basis.”

Valenti emphatically believes that Berkowitz is a true innovator in the restaurant industry. His contributions, he says, are far-reaching.

“Roger likes to serve food that is familiar,” he says. “He realizes who we are: a restaurant group that can’t be too far right or left. But I can point to a number of different things [he has done]. Eight years before the trans-fat movement started, he came to us and said we had to get trans fat out of everything we do. At the time, I didn’t even know what trans fat was. He really was a pioneer in that movement years before anyone else did that.

“He also was responsible for implementing a fully integrated HACCP program. We have our own lab where we test for bacteria counts and listeria on all shell-fish and fish, and we’ve been testing for mercury for the last two years. Also, we do our own surprise health inspection audits.”

Valenti adds, “Then there’s the sourcing. You hear that’s such a big thing now, buying from the source, but that’s the DNA of this company. We have fish buyers who buy right from the auction right away. It’s all pretty innovative, light years ahead of everybody. There’s a lot of vision and foresight there.”

Paul Booras, Legal’s former director of emerging brands and current director of culinary services for Boston-based Unidine Corp., muses that Berkowitz is not only smart, he is instinctual about the trends. Booras cites the company’s conversion years ago of its vegetable oil into biodiesel fuel to conserve energy as one example of Berkowitz’s knack for forward thinking.

“He’s a pretty innovative guy and always looking to do the right thing,” Booras says.

Despite all of Berkowitz’s success and the innovations he has imparted, Valenti says Berkowitz remains an unassuming individual who refuses to rest on his laurels.

“He’s a pretty humble guy who’s made some healthful strides but is not one to stand on a pulpit and tout his vision,” Valenti says. “He is someone who definitely has made a difference in this industry.”

TITLE: president and chief executive, Legal Sea Foods, BostonBIRTH DATE: May 26, 1952HOMETOWN: Waltham, Mass.EDUCATION: bachelor’s degree, Syracuse University, Syracuse, N.Y.CAREER HIGHLIGHTS: opening first downtown restaurant in 1980 in Boston’s Park Square; developing a new style of management using associate advisory councils and getting hourly employees to participate in strategy sessions; being president of the Massachusetts Restaurant Association in the early 1990s; member for the last five years of the interviewing committee for White House fellowships, which pair high-caliber candidates from industry, the public arena or the military with cabinet members or governmental agencies; being one of the first operators to ban trans fats about six years ago; receiving an IFMA Silver Plate Award in 1999 and a Golden Chain Award from Nation’s Restaurant News in 1998PERSONAL: married, three childrenFAVORITE JUNK FOOD OR SNACK: “There are lots of them, but I really love a hot dog with lots of mustard and relish.”