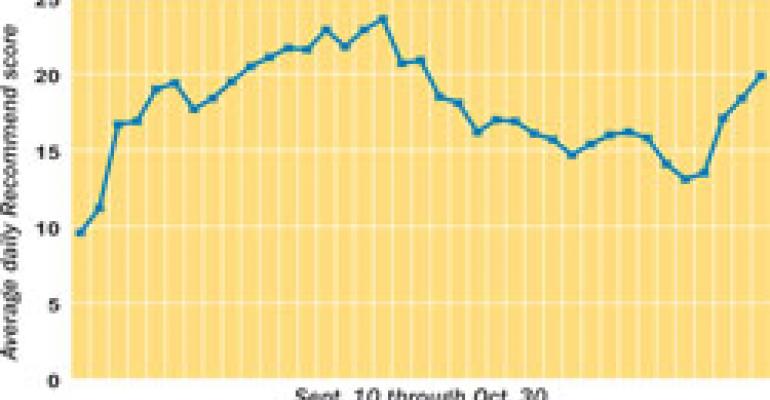 Quick-service chains that have attempted to strike a balance between value offerings and premium menu items likely are positioning themselves for success in the post-recession recovery, experts say.

Consumer research has shown that perceptions of some of the largest quick-service brands have become more favorable recently with both typical quick-service customers and more affluent consumers that may have traded down from casual dining during the economic downturn.

According to a new report from New York-based consumer research firm BrandIndex, efforts to play to both ends of the value spectrum—also known as a “barbell” strategy—may have set up some of the larger players for more rapid revival as the downturn ebbs.

The average Recommend score—which is calculated by subtracting negative responses from positive responses to the survey question, “Would you recommend this brand to a friend?”—rose from a value of 9.6 on Sept. 10 to a peak of 23.6 on Oct. 2. The scores stayed relatively higher than the starting point for most of last month and ended at a value of 19.9 on Oct. 30.

“That’s a statistically significant movement,” said Ted Marzilli, senior vice president of BrandIndex’s parent company, YouGov Polimetrix. “If you go all the way back to January of 2008, the [average Recommend score] has been rising throughout this period. I think the story is about the economy, but a little bit more.”

“It really says the folks QSRs are serving today are satisfied and telling friends and family members about it,” Marzilli said. “It’s a great indicator of future prospects.”

He continued: “We found [higher Recommend scores] from population groups you might not expect: college-educated people and households with incomes of more than $100,000.Those groups are probably finding themselves in quick service for the first time in a long time. When the economy rebounds, there’s a reasonable chance that quick service will hold on to some of these customers.”

Fast-food brands also could welcome back less-affluent customers who have cut down on dining out as the economy recovers and unemployment recedes, Marzilli added. Because the restaurants surveyed have made improvements in operations and expanded menus, he said, they could benefit more than other retail businesses that have benefited from consumers trading down, like Walmart.

“Walmart’s really benefited from the economy, but you don’t see the same [Recommend] numbers among the higher-end and affluent customers,” Marzilli said. “When times get better, those people might be looking for other retail options. Quick-service restaurants are a different story. I’d be pretty excited about that potential. They seem to be executing pretty well.”

BrandIndex surveys 5,000 American consumers every weekday about their perceptions of many different companies.— [email protected]