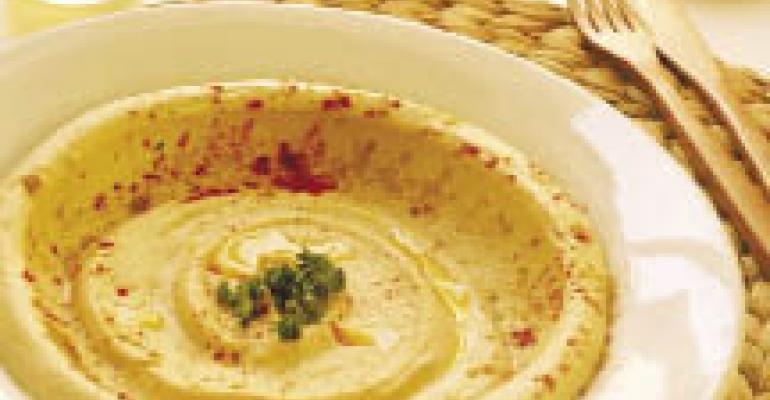 David Kostman didn’t waste any time crying in his beer after Lehman Brothers, the investment-banking firm where he was a managing partner, went belly-up in 2008. Instead, he turned his attention to making authentic hummus the linchpin of a brand-new empire: Nanoosh, an upscale fast-casual, Mediterranean concept based in New York.

In two years, Kostman and his partners, chief operating officer Zwika Pres and executive chef Hugo Trinquier, have opened four restaurants on Manhattan’s Upper East and Upper West Sides, in the East Village, and in midtown. The trio launched Nanoosh with private funding, and Kostman noted that the company carries no debt.

With a focus on offering organic, healthful menu items — all featuring hummus as the base ingredient — the four-unit chain curre is racking up annual sales of more than $5 million and year-over-year double-digit growth since 2008.

“I had the idea for Nanoosh about two years ago,” said Kostman, who is Israeli. “Hummus was becoming widespread in supermarkets, but had not caught up as a full meal in restaurants. That’s the way it is served in Mediterranean countries; I thought there was an opportunity in the market for Mediterranean salads based around healthful hummus.”

He attributes the concept’s popularity to New Yorkers’ desire for healthful, lower-calorie fare and the stores’ chic, modern design. He added that women in particular are fans of the food.

“The demographic here is more health oriented,” he said. “Consumers want to eat fast, but they still want to maintain their healthy lifestyle. It’s really about eating a good, balanced meal without oil, frying or heavy ingredients.”

He noted that Nanoosh’s core customers are “sophisticated and quality-oriented,” and range in age from 25 to 45 years old.

All the restaurants are full-service except the midtown location, which relies mainly on counter service. They range in size from 1,000 square feet to 1,900 square feet and are designed with natural materials, green tile and calming colors.

Menu items include bowls of hummus or hummus with Tahini topped with a choice of organic mushrooms and onions, spicy sun-dried tomato pesto, or red and green peppers, chicken, ground beef or boiled eggs. Mediterranean tuna, marinated chicken and Greek salads also are on the menu, as are wrap sandwiches made with whole-wheat and white pita bread. The check average is approximately $13 at the sit-down restaurants and $10 at the counter-service location.

Kostman said he is convinced the concept has the potential to become as popular as sushi, given a little time.

“When you look at hummus as a category, honestly it is right where sushi restaurants were 25 years ago,” he said. “I think it is at its beginning, and we have a tremendous opportunity to lead the segment.”

Ron Paul, president of Technomic, the market research firm based in Chicago, agrees that the popularity of Mediterranean restaurants is on the rise, but he’s not so sure that hummus-based restaurants will have the same kind of shelf life sushi restaurants enjoy.

“I think interest in the category is definitely growing, but it’s rather ambitious to suggest [hummus] will be as popular as sushi,” he said. “It is being helped by the fact that in New York supermarkets, the popularity of hummus is spreading. And it does have the perception of being healthier, so I would agree that it’s likely to be a growth category. But how big? No one can see [what will happen] years from now. The short answer is it has a long way to go to get to sushi’s popularity.”

Nevertheless, Kostman said he is ready to continue expanding, chiefly to metropolitan locations — at least for now. He is targeting additional New York sites, as well as the West Coast and overseas for future growth.

“In the next 20 years it could be everywhere,” he said. “We see it in Washington, D.C, Minneapolis and Chicago, and Europe, too. If we do half of that in the next five years we’ll be OK.”