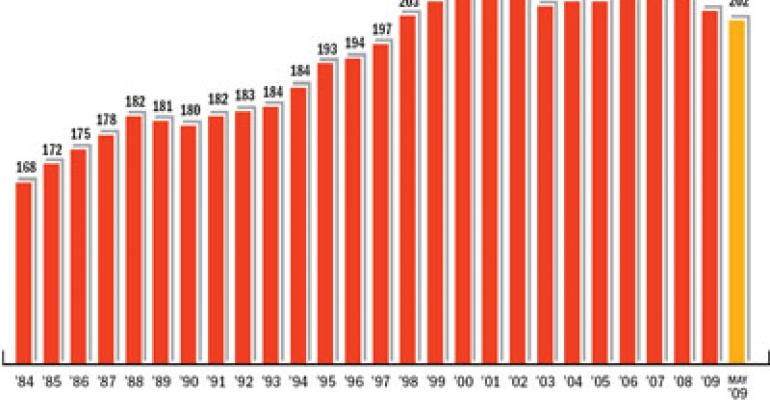 As grocery prices drop, consumers cut back on restaurant visits

With prices for supermarket foods continuing to fall and those for restaurant meals continuing to rise, many economically humbled consumers are cutting back on dining out and rediscovering the joy of grocery shopping.

The U.S. Labor Department’s consumer price index for food at home has declined nearly 2 percent in the 12-month period ended in August. The last time the index declined more than 1 percent over the previous year was in 1992. Meanwhile, in the 12-month period ended in August, the food away from home index—which includes everything from full-service restaurants and on-site foodservice to vending machines—rose 3 percent. There has not been a 12-month period where prices for food away from home declined since the Labor Department began tracking it back in 1954.

“We’re in a position we have not been in [for more than] a decade,” said Harry Balzer, vice president of market research firm The NPD Group. “Who do you think is going to get hammered in this environment?”

The answer ultimately is restaurants, he said.

While stagnant incomes, steep unemployment and economic uncertainty have recently sent consumers to the market more frequently, new data from Port Washington, N.Y.-based NPD indicates that behavior is not likely to change even after the recession ends and grocery food prices begin to rise, as they have historically.

When it comes to food and beverages, consumers are behaving differently than they did just 12 months ago, NPD found. In January, 48 percent of consumers surveyed said they were preparing or cooking more food at home than they had in the prior year. In addition, 44 percent said they were using leftovers more often, and 43 percent said they were “stocking up” on low-priced foods. A significant number of respondents also said they were visiting discount stores more, using more coupons and searching store circulars more for low prices.

Though nearly half of respondents said they have been preparing and cooking more meals at home, “more” is a relative term, NPD found. According to the data, the average American prepared and consumed 873 meals in the 12 months ended in May, up from 868 in the 12 months ended February 2008. The difference is just five more meals a year, less than half of 1 percent of total meals per year.

Though penny-pinching consumers may be preparing and eating slightly more meals at home, they still aren’t cooking from scratch more at home, NPD found. Historically, Americans have been cooking less each year, but during recent years those figures haven’t changed much. In the year ended in February, just over 49 percent of all main dishes served as main meals in the home were described by consumers as “fresh” or “homemade.” That number hasn’t changed much since the turn of the 21st century, when it was roughly 50 percent.

“[We’re] not cooking less or more—cooking the same,” Balzer said. “I think it’s an economic issue, just not related to this current economic issue.”

Fewer women entering the workforce and stagnant household incomes are among the key factors Balzer sees as contributing to the long-term shift in consumer eating patterns. Since the 1960s, the restaurant industry has benefited from a country that has become increasingly wealthy and supported by two-income households. But according to the data, fewer women—the primary meal preparers in this country—are entering the workforce, and median household income hasn’t changed for some time.

“We have these learned behaviors over the last 18 months that really should be a wake-up call to restaurants,” said Phil Lempert, a food industry analyst and editor of . “Restaurants have just not responded to consumers needs.… [They] have got to go back to being an experience.”

To attract price-conscious consumers and retain them for the long haul, many supermarket chains, like their restaurant competitors, have been dealing heavily over the past year.

Since 2006, Shop & Stop, a supermarket chain that operates 383 stores in the Northeast, has been focused on lowering prices, offering steep discounts to regulars and finding ways to better communicate those deals to consumers.

Among the chain’s many new value-focused programs is the Value Improvement Program, which allowed the chain to review it offerings aisle by aisle and ensure that the assortment and price delivers more value, officials said. Another program is Real Deals, or items that stay on special for longer periods of time. The chain also recently mailed out store discount cards with a new logo and doubled the number of deals offered to customers who use the card.

“We understand that consumers have choices to make when navigating these challenging economic times,” said Stop & Shop spokeswoman Faith S. Weiner. “Our sole focus is on offering customers a great experience when they shop in our stores, and [we] will continue to look for more ways to provide customers with great food and meal solutions to feed their families.”

To provide customers with quick, affordable meal solutions, Food Lion LLC, which operates more than 1,300 supermarkets under various names in the Southeast and Mid-Atlantic states, launched Meals for Less late last year. Each week, Food Lion stores display all of the ingredients needed to make a meal for four for under $10.

“We are focused on finding ways to help our customers save money in these tough economic times,” Gene Faller, Food Lion’s vice president of dry category, said in a statement. “Our goal is to provide our customers with low-cost, quick and easy meal solutions.”

To stand out among the many competitors offering a price message and remind consumers that they need not go from store to store for low prices, in May Food Lion also rolled out a new television ad campaign. Called “Great Price Hunters,” the ads show families hunting for low prices on various products in locations such as the jungle and at a watering hole.

Among the newest retail competitors vying for a piece of consumers’ limited budgets is Basis, a distributor of food from small and midsize farms to high-end New York City restaurants. The company plans to open a chain of Basis Good Food Markets, small-format retail shops that will sell traceable, locally sourced and mostly seasonal produce, meat and dairy at affordable prices. The stores, the first of which is slated to open this winter in New York’s Meatpacking District, also will sell prepared foods made from the products it carries, as well as coffee and espresso.

“The emphasis is on value,…value is balancing low price and quality,” said Basis founder and chief executive Bion Bartning. “I would hope that we are competing with McDonald’s and Subway.… I’m not saying we’ll have lunch for $1.99, [but we’re trying to be] an affordable alternative.”