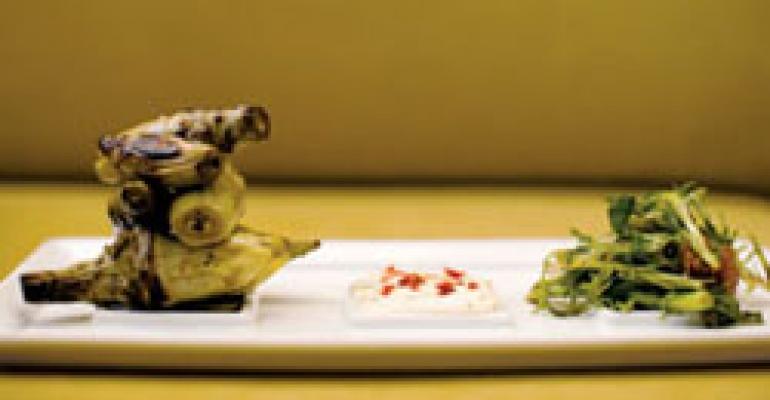 Get set for spring

Spring cannot come soon enough for chef Tom Harvey at One Midtown Kitchen in Atlanta because he gets to work with the season’s bounty, specifically baby artichokes.

“Baby artichokes to me are like a soft-shell crab: You just cook ’em and serve ’em,” Harvey says. “There are just some flavors that are so special on their own, and available for such a short time, that the last thing you want to do is combine them with anything.”

Harvey blanches the baby artichokes in court-bouillon, tosses them in olive oil, salt and pepper, chars them on a wood-fired grill and serves the $8 dish with lemon-ricotta dip and a salad with watercress and jícama.

“The baby ones are the cornerstone of the whole dish,” he says. “The choke hasn’t developed in the core, and the leaves aren’t as tough; you just peel a little of the stem and trim it. There is not a lot of waste, and obviously that appeals to me as a chef. You are not throwing half in the trash.”

“You really start seeing the great spring produce in April, or the middle of April,” Harvey says. “We will start to transition our menu, right at the beginning of March, with whatever we can get.”

Harvey likes to pickle vegetables, such as fiddlehead ferns and ramps, near the end of a spring season, so he can store them and break them out in early March, before most spring produce gets really good.

“Preserved vegetables from last season allow us to start getting those touches on the menu, even before our local sources start producing,” he says. “We have a store of pickled ramps, so we can start using them before spring ramps come out.”

Once the fresh ramps start coming in, Harvey and his cooks get busy.

“Ramps are certainly one of our all-time favorite things, and when they are in season, we basically put them anywhere that calls for onion or garlic,” he says. “We grill them, we braise them, we roast them, we steam them, chop them up fine and put them into rice.”

Harvey says one of his favorite ways to serve ramps is using them whole to complement a filet of South Carolina grouper. He takes the ramp roots, grills them and incorporates them into a risotto, and tops the plate with a bright green broth made with vegetable stock and the green part of the ramps. That dish sells for $22.

Lassi, an Indian restaurant in the West Village neighborhood of Manhattan, is named after the traditional drink made with yogurt. Chef-owner Heather Carlucci-Rodriguez welcomes spring produce as an avenue to play with the namesake beverage and other dishes.

“I am steadfast on keeping the traditional flavors, except for when the peaches come in,” she says. “Roast them with honey, and we use that with the lassi as well. That is always served with savory food.

“We do a little more crossover with traditional Indian desserts and the fresh produce that we get in the spring. We get wonderful springtime figs.”

She caramelizes the figs with cardamom and serves those with ras malai, which is a traditional Indian dessert: balls of Indian cheese poached in rose syrup. The dish sells for $6.50.

Carlucci-Rodriguez also will bring out a monkfish masala dish this spring, with a green curry made with cashews, cilantro and mint, priced at $14.95. It will be on the menu in early March and stick around throughout the summer. She says the cilantro and mint need to be at their peak, since the dish relies on the fragrance of the herbs.

In Michigan, Grand Traverse Pie Company chief executive Mike Busley says the strawberry cream pie will be a focus on the company’s Fresh Flavors promotion, which starts on March 20, the first day of spring.

“Strawberry is one of the first fresh fruits we have access to,” he says.

The Fresh Flavors menu includes sandwiches and salads, like the Parisian ham and havarti, with romaine, spring lettuce, cherry chutney and mustard on an herb baguette, or the Italian, with ham, pepperoni, tomato, roasted red pepper and feta cheese. The Strawberry Fields salad also takes advantage of the fresh fruit coming into season. The salad sells for $6.49 to $6.79, and sandwiches are $5.99 to $6.79, depending on the market. The strawberry cream pie is $2.99 per slice or $13.99 for a whole pie.

Busley says he is trying to drive awareness that the 17-unit bakery-cafe chain, based in Traverse City, Mich., serves sandwiches and salads, as well as pie.

“My wife and I founded the business about 12 years ago, and it was all about pie,” he says.

At Addison in San Diego, the spring menu comes out in mid-March, when Southern California produce really starts to bloom.

“I am so fortunate to be out here,” executive chef William Bradley says. “The produce in the local supermarket is as high-end as it gets.”

Addison offers a three-course fixed-price menu for $78 and a four-course tasting for $98. Bradley also will do an eight-toten-course chef’s choice menu that he engineers, with a little help from his guests.

“I love the interaction and surprising people,” he says.

Last year, late in the spring, he put together a pasta dish with a morel mushroom sauce for an important guest. It was a hit, so Bradley and his cooks decided to refine it and make it a regular feature this spring.

The sauce is made with fresh morels, sautéed with shallots, and combined with a morel mushroom cream sauce, poured over ravioli filled with king crab.

For Brother Luck, executive sous chef at Cheyenne Mountain Resort in Colorado Springs, Colo., taking advantage of the superfruit trend is a priority this spring. He is targeting guests that are pining for fruits like pomegranate and wolfberry, which have reputations as nutrient-rich powerhouses.

“Pomegranate was one of the first things that came to mind because of the easy accessibility to them,” he says, “and the multiple ways we could use them.”

“With the economy the way it is, it gives guests more of an option for the same price” Luck says. “Instead of having a large portion dessert, you can have three small portions.”