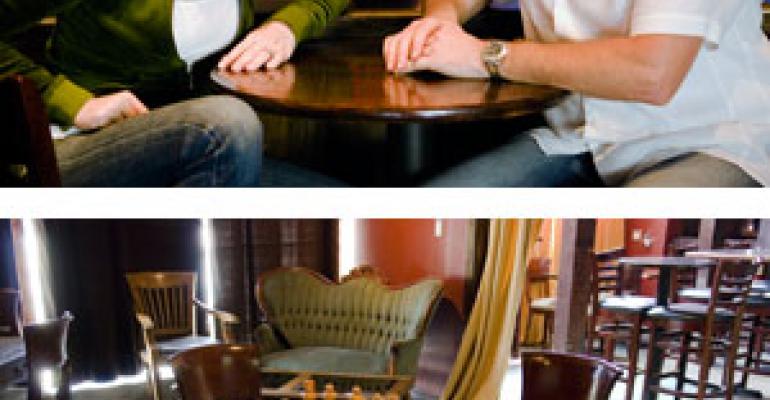 Fun and games a strategy at Henry's Hat in L.A.

LOS ANGELES Howitzers are likely unappreciated at Henry’s Hat, one of Los Angeles’ newest gastro-pubs. But feel free to sink another guest’s battleship.

Ditto for toppling a dinner partner’s pile of blocks, swooping up the whole table’s hearts, castling your rook, double-jumping a date, or scoring big with X-Y-L-O-P-H-O-N-E. Old-fashioned parlor games, from Scrabble to Battleship, chess, checkers, Jenga and cards, are a big part of the place’s attempt to keep patrons coming back. And, said co-proprietor Martha Madison, the tabletop action is working beautifully -- somewhat to her surprise.

“It’s something that started as a simple thing and sort of took off,” said Madison, a former “Days of Our Lives” star who opened the place with husband, A.J. Gilbert, after finding success with the Luna Park restaurants in Los Angeles and San Francisco. “Now it’s definitely one of the things we’re best known for.”

Customers have rummaged through closets for childhood board games they hoped to put in the Hat’s collection, which already runs to some 25 boxes. Others have mentioned the possibility of tournaments, “something we’re definitely talking about,” Madison said. One patron developed his own game with hopes the place would add it as an attraction.

“It’s really a very sweet thing, and people really appreciate,” she said. “This is definitely a place where you can regress.”

The games are provided free of charge to patrons. They make their choice off a menu, providing a driver’s license as security. A server brings the game to the table.

It’s not uncommon, said Madison, for a party playing a game to ask the occupants of an adjacent table to join in or swap contestants. “A lot of people don’t watch sports or don’t like being part of a big group,” she explained. “This is a way to break the ice.”

The 85-seat pub, which opened in mid-July, strives to be a homey neighborhood place, with a nod to nostalgia. A local critic characterized the design and ambience as “rumpus room chic,” a description that Madison calls spot-on.

One of the Hat’s two dining rooms is called The Den, which is also rented out for parties and events, complete with complimentary use of a Wii video-game system “so they can play all night,” Madison said.

Henry’s, named after Madison and Gilbert’s dog, has yet to gauge the games’ effect on sales, according to the former soap opera actress. “We’re still new, so we don’t have a handle on that yet,” she said. “But we do know the Wii has brought in some big parties.

“A couple of customers have said to us, ‘Oh, I know why you have the games. You stay longer if you’re playing games,’" she said. “That thought never crossed my mind, honestly.”

Instead, Madison explained, she and Gilbert wanted to open the sort of pub where people like themselves would hang out. They thought of the amenities they’d enjoyed in past haunts. Madison recalled a neighborhood bar on New York City’s Upper West Side that stocked a few copies of Connect Four, a tabletop game. They bought five of them for $10 each, then filled up the toy box with other classic games. “The cost was minimal,” she said.

“Our customers tend to be much like us: 30-ish, who grew up in the 80s, local, professional,” Madison said. Many of them are drawn from the nearby television and movie studies, she added.

Customers typically spend about $20 per person for dinner, including drinks. “Our burgers range from $8 to $12, and our beers range from $5 to $6.50,” Madison said. “The most expensive thing on our menu is under $13.” The selections at that level include an achiote-marinated chicken, a chef’s salad, and a steak salad, all priced at $12.50.

All the ingredients are locally sourced and selected for their sustainability, with a high proportion of organic components, according to Madison.

The place is better known for its food than its games, she indicated, but the tabletop attractions have clearly been a strong draw.

“It’s working, so we leave it alone and just let it happen,” she said.