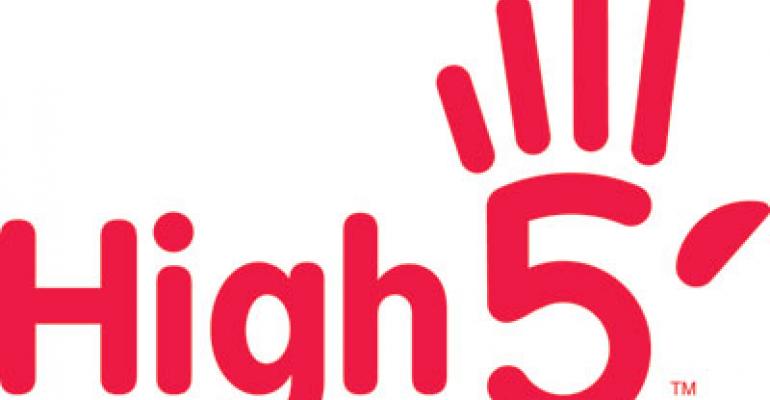 Family dining chain Friendly’s Ice Cream has launched a promotional and operational repositioning to live up to its name by giving away one trillion high-fives.

Local advertisements began teasing the new initiative Sept. 6, which will be launched across the 500-unit system Sept. 19. On that day Friendly’s chairman Harsha Agadi will announce the trillion high-fives initiative on the brand’s Facebook page, and will also launch a new value menu featuring five customer favorites for $5 each.

The campaign has been quietly underway since Aug. 22 via the Friendly’s web site, social media channels and point-of-purchase material.

Andrea McKenna, chief marketing officer at the Wilbraham, Mass.-based chain, said “high-fives” are a ubiquitous expression of friendliness and celebration, and this campaign was an attempt to make the family dining chain “much more contemporary, relevant and fun.”

She said the idea for the campaign came from marketing firm The Via Agency, which proposed “the name of the company is Friendly’s. You should own friendliness.”

The $5 menu is a permanent addition, although the items on it might change periodically.

The menu items that have been marked down to $5 from their previous $8.50 to $9 range are loaded waffle fries with melted Cheddar sauce, bacon, sour cream and a side of ranch dressing; a grilled chicken wrap with fries; the turkey club “super melt” with fries; a crispy chicken salad; and a newly reformulated burger now made with never-frozen USDA Choice beef, served with lettuce, tomato and onions and a side of fries.

While it implements the $5 menu, Friendly’s will forego its usual fall promotion of new items. McKenna said that serves two purposes. It gives customers value, which is perceived as friendliness. But at the same time it should simplify kitchen operations, allowing for better food and service during a time of national promotion that management anticipates will boost traffic.

A training effort also has been underway for restaurant greeters to ask patrons what they’re celebrating today. Whatever they might be celebrating — a birthday, a little league victory, completing a visit to the doctor, the fact that it’s Wednesday — would presumably warrant a high-five, McKenna said.

McKenna noted that part of the training is emphasis on not being overbearing about the high five and to bear in mind that, for some people, “It’s not a welcome gesture.”