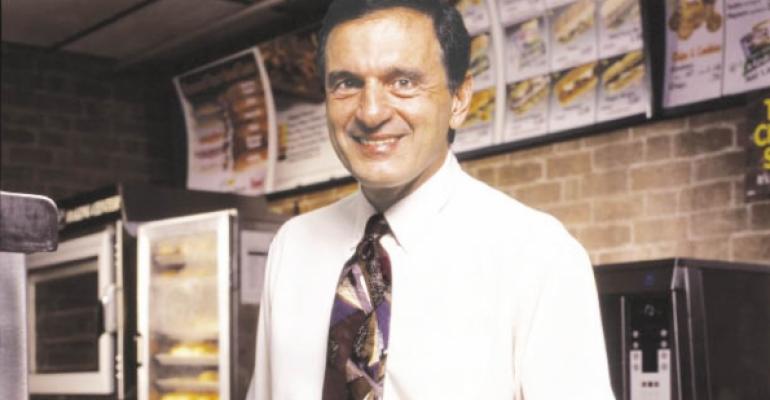 At 11 a.m. on a recent Thursday, Subway co-founder Fred DeLuca is not at home for a scheduled interview. A reporter waits five minutes, calls DeLuca’s cell phone and receives a sincere apology for his tardiness; a morning meeting with franchisees ran longer than expected, and it’s not finished.

Near his Fort Lauderdale, Fla., home is Subway’s U.S. purchasing co-op, where several franchisees from the chain’s advisory council had gathered. DeLuca invited them to breakfast — at a Subway, of course — for an hour’s chat that ultimately stretched beyond three. Even at 63 years old, long exchanges with operators still excite the self-made sandwich billionaire.

A few years ago, however, both parties might well have avoided each other. In 2006, franchisees sued the Milford, Conn.-based company over control in the management of Subway’s Franchisee Advertising Fund Trust. But when a judge ruled in May in favor of Subway’s owner, Doctor’s Associates Inc., both parties decided it was time to bury the hatchet and get back to growing the world’s largest restaurant chain — DeLuca’s all-consuming vision.

“I go to Subway stores at least weekly and sometimes every day, and I talk to owners all the time over the phone,” DeLuca said. “I don’t really have the desire to do something else. It’s my baby; I started it, and I’m really involved in it.”

And that’s the truth, said Dick Pilchen, Subway’s first employee when it opened 45 years ago as Pete’s Super Submarines in Bridgeport, Conn. At an August birthday party for DeLuca’s mother, DeLuca balanced the twin roles of gracious host and chain leader, talking at least “50 percent of the time about business rather than pleasure,” said Pilchen, now a Subway marketing consultant and franchisee. “If he goes on a trip, he’s out with franchisees talking to them.”

And DeLuca has come a long way. Born in Brooklyn, N.Y., in 1947 into a family of modest means, DeLuca was a gifted student and hard worker who mastered patience and diligence doing odd jobs and running a paper route as a child, said sister Suzanne Greco, Subway’s longtime director of research and development.

“We didn’t have any big family resources … so Fred was a big saver,” Greco said. “He was the type that would put his quarters and nickels into rolls, always trying to do something better with his money.”

Such cost-consciousness remains a fixture of his business philosophy today, Greco added.

But DeLuca had to learn the hard way that franchising was necessary if he would ever achieve his first restaurant goal of having 32 stores in Subway’s first 10 years. Just shy of nine years in business, he and business partner, Dr. Peter Buck, a nuclear physicist for General Electric, owned only 17 units, and DeLuca was “running like mad to try to keep just those going.” Employing his gift for keen analysis, DeLuca stepped back and studied why some stores were successful, and others less so. The answer was geography.

“I realized I could run the stores that were close by pretty well, but as they got further away, I had problems managing them,” he said. After examining established franchise models at McDonald’s and KFC, he said to Buck: “Wouldn’t it be cool to have someone else own the store — someone who lived near it? They could care for it the same way I cared for those close by me.”

“They recognized the power of it, exploited it very early and successfully, and they were among the first to use area developers,” Paul said. Subway wasn’t on the Chicago-based restaurant industry tracker’s radar when it published its first Top Chains 100 report in 1972. As he shuffled through research documents, Paul added: “I see they weren’t even on the list in 1989. Yet by 1999 they were No. 7, and in 2009 they’re No. 2.”

Today, Subway has 34,000 stores in the system, and DeLuca said his wildest dreams never included such a number. A lifelong goal-setter, he grew his expectations in stages.

“It was a belief we had that it was possible, but not a certainty we’d be able to do it,” he said.

DeLuca announced the goal to his team, and the development group shifted into overdrive. In 1987, when it had 750 stores, Subway added 1,000 units in a single year — a pace that doubled in later years.

DeLuca admits he’s asked himself, “How the hell did we do that?” only to remember that such growth is “actually quite simple.”

Expansion plans aside, Subway has succeeded because of its food, said John Y. Brown Jr., the man who sparked KFC’s incredible growth in the 1960s.

“He’s done an outstanding job of giving customers what they want in variety, fresh bread and fun sandwiches,” Brown said. “They were always ahead of the game with their products and their marketing. And when competition has come along, it’s only made them better.”

DeLuca agreed and said the chain’s massive buying power has helped it pressure competitors’ prices — most recently through its $5 Foot Long effort — while improving store profits. But he also believes that product innovation, such as the company’s new breakfast offering, is what will keep store sales rising steadily and unit counts expanding.

“We just went through our global strategic planning process for 2015, and we still plan to add stores in North America and internationally,” DeLuca said. “If you look out to 2015, I wouldn’t be surprised to have 45,000 stores.”