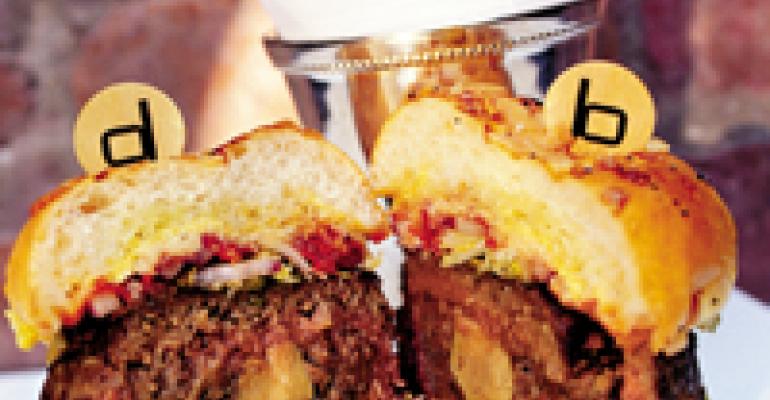 Forget culinology. The hot fine-dining trend could be burgers

The hamburger is back in vogue, after never having gone out of style. Simple, hearty, comforting and usually affordable, the burger represents classic American fare at its finest. But while many people agree that the iconic sandwich requires little fuss to function as a satisfying meal, many chefs have been compelled to brand the bun with their own luxurious interpretation. It's become a recent trend that has swept across the country in a blur of blue cheese and black truffles.

The back-to-burgers culinary movement might be most evident in New York City, where fine-dining stalwart Laurent Tourondel recently extended his BLT line of high-end restaurants with the opening of BLT Burger. In its most recent roundup of restaurants opening in the city, The New York Times led with three burger places: brgr, a David Rockwell-designed new outlet owned by Chris Russell of Moomba and Sage; Stand, from Republic and Bond Street proprietor Jonathan Morr; and Burgers & Cupcakes, from Mickey Mantle's godfather Bill Liederman and new partner Nance Greenspan.

Some converts to the trend acknowledge that they saw the light after seeing what a high-end burger did for world-renowned chef Daniel Boulud at his DB Bistro Moderne in New York.

"I didn't think I could improve the classic hamburger," said Boulud, whose $69 DB Burger Royale generates as much as 40 percent of menu items sold - and, insiders say, a far higher percentage of the restaurant's profits. "But I did think I could offer my own unique version that combines the best of French and American cooking."

For the burger fanatic who is willing to refinance their home to satisfy a craving, Hubert Keller's restaurant Fleur de Lys in Las Vegas will provide them with the $5000 FleurBurger. Stuffed with foie gras and black truffles, the Kobe beef patty comes smothered in black truffle sauce and served on a brioche truffle bun. Don't worry about choosing a beverage - a 1995 bottle of Château Pètrus accompanies the decadent sandwich, along with a set of Ichendorf Brunello stemware for the customer to keep.

Meanwhile, observers are keeping an eye on Napa Valley, Calif., where the celebrated Thomas Keller is expected to open a place that he's described as being inspired by the In-N-Out retro burger chain. The chef-owner of The French Laundry said he envisioned that sort of facility for the space that now houses his newest restaurant, Ad Hoc. But he has not disclosed how he plans to distinguish his burgers.

So how do chefs convince their customers to order a $70 hamburger? For many, the hamburger simply sells itself, banking on its reputation as the ultimate, feel-good food.

"Burgers are something that a lot of us grew up eating, so they remind us of childhood," explains Stephen Belie, executive chef at Citron restaurant in Palm Springs, Calif. "The flavor is so familiar, and I think a lot of people find that comforting."

But as the price of a burger goes up, so do customer expectations. "They anticipate something exceptional, something exciting," says Belie, who spent nearly two and a half months taste-testing different types of meat for his Hawaiian Kobe beef burger that features melted Cambozola cheese, caramelized onions, and lemon-scented arugula, which is offered with a crispy jumble of parmesan truffle frites. "These days, a burger has to have the best meat, the best cheese, and the best bread, especially if it costs over $20."

At the Spiced Pear restaurant in Newport, R.I., executive chef Kyle Ketchum's $25 Kobe burger woos guests with a stuffing of braised short ribs, a secret blend of spices, and a blanket of Vermont white cheddar, grape tomato, caramelized onion jam and piquant coleslaw. Named one of GQ magazine's 20 Burgers to Try Before You Die, the sandwich was originally put on the menu to reach out to guests of the Chanler Hotel, the restaurant's home. "One of our former chefs tried to take it off the menu and customers complained," says Ketchum. "Regardless of how upscale a menu is, people still appreciate a good burger."

For Michael Romano, executive chef and partner of New York City's quintessential upscale American restaurant Union Square Café the key to an upscale burger's success is using superior ingredients and skilled preparation rather than a number of superfluous toppings. The meat is ground fresh each morning; the patties are painstakingly formed; the poppy seed brioche bun is freshly baked. "People look at our burger like it's a good piece of meat - like a steak," says Romano, whose burger has been on the menu for 21 years. "It's basically an adult version of fast food."

brgr, which opened, features a variety of burgers as well as a build-your-own burger.

The Stand, set to fire up its grill on Dec. 15, reportedly will feature mushroom beef burgers, chopped steak burgers and bacon-and-egg burgers, as well as a burger soup with beef, onions and cheddar cheese.

Burgers & Cupcakes is features nine burgers, including an ostrich and free-range bison version.