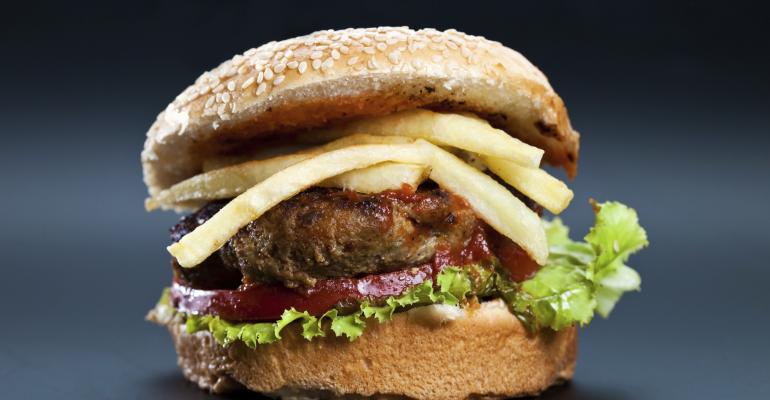 Tired of the present and uncertain about the future, Americans likely will continue their culinary navel-gazing in 2011. We will no-doubt be looking to the homespun past for culinary inspiration, but at the same time will retain a contemporary approach, using ingredients we believe are better for us, better for others or better for the planet.

The better-burger wave will continue to rise as restaurateurs showcase higher quality beef and other protein, artisan buns, house-made toppings and other touches to set their fare apart from the competition. But the burgers will be joined by other gussied up comfort food.

Flip Burger chef-partner Richard Blais is looking to hot dogs for inspiration — he planned a visit to Brooklyn fast-fine hot dog specialist Bark last time he was in New York — and I suspect he’s not the only chef doing that. Hot dogs are merely Americanized sausage, and sausages open the door to virtually any cuisine, from Germany to North Africa to Thailand. Blais also told me he thought hot dogs allowed chefs to flex their culinary muscles more than burgers do.

I expect to see more macaroni and cheese, too, probably with local cheese in communities where that’s appropriate, or house-made macaroni — maybe cavatelli and cheese instead. Lobster mac and cheese was big in 2010, and we’ll likely see other high-end proteins join the fun. I’ve already seen one mac, cheese and crab.

Meat loaf will be no stranger to menus, either.

Fries are fattening and everyone knows it, so anything restaurateurs can do to make them seem better for you, or merely to de-commoditize them, likely will be attempted.

Sweet potato fries are the darlings of the moment. Even a Thanksgiving Day Heinz French fry giveaway in New York to promote its new ketchup packets gave passersby the choice of regular or sweet potato. But you can expect other attempts to set fries apart — from burying them in cheese and sauce to adding garlic and herbs to taking a page from Five Guys’ playbook and listing the potatoes’ origins.

Restaurateurs will try different frying media, too. Elevation Burger has enjoyed success with its olive oil fries and more restaurants likely will give it a go. On the other end of the spectrum, you can expect lower goose fat prices in 2011, and that stuff is a natural medium for frying potatoes.

Mixtures of sweet and regular potatoes are becoming more common, and more multi-colored potato offerings will show up on menus in 2011.

I also predict an upsurge in thick-cut cottage fries. They have a homey, retro look that people seem to enjoy these days, and, since they have less surface area than skinny fries, they’ll absorb less oil and be lower in fat and calories — a potential selling point once menu labeling goes into effect at larger chains nationwide.

Once upon a time, there was an ingredient…

Americans seem increasingly interested in knowing where their food comes from. You can attribute that to questions of security or health or animal rights or environmentalism, or simply to being a good neighbor. But the fact is: Food that can trace its roots to someplace specific, or in other words, food that tells a story, has undeniable appeal.

The local food movement is just part of this larger trend, and when using local ingredients is impractical, lending romance to the food’s origins is another option. So expect more single-origin coffees and menus that mention where the food comes from, like Colorado peaches or Oregon blueberries, even if it’s the other side of the country.

Or across an ocean. The Italian government has launched a campaign encouraging American consumers to buy authentic Italian ingredients, from prosciutto di San Daniele to Parmigiano-Reggiano, and I think the campaign has legs.

And even if the ingredients have no specific origin, the recipe can.

John Sedlar Rivera made a dramatic return to the restaurant scene with his restaurant Rivera in Los Angeles, featuring food from the Spanish-speaking world. Call a number at the bottom of the restaurant’s menu, type in the number next to a menu item, and a recorded message will tell you about the origins of that dish.

I think we’ll see more of that.

We’ll also see more dishes that appeal to locals by using their name.

Smashburger, a fast-casual chain based in Denver, has a policy of adding a locally inspired burger to menus in each market. It adds green chiles to the Colorado Smashburger, rémoulade to the Louisiana Smashburger and chopped green olives to the Michigan Smashburger.

Consumers will eat food that seems better for them, but only if they like how it tastes. They seem more flexible with drinks, where flavors that don’t necessarily appeal to the American palate are still being sucked down with gusto.

For example, Euromonitor reports that 40 percent of bottled tea in the United States is made with green tea — a flavor that does not appeal to the American palate — and another 9 percent is virtually flavorless white tea.

Those drinks tend to be sweetened and mixed with fruit flavors, but their growth in popularity is remarkable, particularly given that soda sales continue to decline.

Energy drinks continue to enjoy popularity as cocktail mixers, and retail sales of those and other “functional” beverages remain robust.

Restaurants haven’t cashed in on that much yet, but I think they’ll begin to in 2011.

Quick-service burger chain Krystal recently tested energy drinks in some markets and found they didn’t sell. Other restaurants report that most energy drink consumption is by their employees.

But someone will figure out how to get functional drinks to make the leap from retail to foodservice, and they might do it next year.

Speaking of beverages, the Federal Drug Administration’s banning of the canned caffeinated malt liquor Four Loco will be the first salvo in a broader anti-caffeine attack.

Health trends tend to cycle back and forth. We had carbohydrates under fire early this century with low-carb diets. Then fat had its turn until trans fats were largely eliminated from the market. Salt was next.

Caffeine is the next logical target.

We also might be due for a renewed attack on carbohydrates, and I wouldn’t be surprised if somehow the focus were on gluten.

Gluten is a protein, not a carbohydrate, but it’s found in bread and other wheat-based products, and gluten-free menu items are among the hottest trends going. They’ll no doubt improve in quality over the course of 2011, and become even more widespread.

On the high end

In fine dining, “local” and “seasonal” will be on everyone’s lips, but I think Japanese will be, too.

Chefs from David Bouley to Curtis Duffy continue to be fascinated with Japanese ingredients, and the attention to detail with which those ingredients are sourced, raised or prepared appeals to Americans’ current desire for security.

At the recent Worlds of Flavor conference at The Culinary Institute of America’s Greystone campus in Napa Valley, Calif., which focused on Japan, chefs seemed particularly taken with miyoga, a cousin of ginger, and matsutake mushrooms, which have the added benefit of flourishing in the American Pacific Northwest.

Nagaimo, a tuber sometimes called a mountain potato that has what seems to be an inexhaustible ability to ooze slime, is spreading inexplicably among Japanese-influenced restaurants in the United States.

Josh DeChellis, who is executive chef of La Fonda del Sol in New York but has a solid background in Japanese cuisine, recently was charged with devising something else to do with nagaimo. So he found it has some of the same binding qualities that assorted hydrocolloids have — allowing for molecular gastronomy tricks using a natural product that the Japanese insist also is excellent for your health.

Yuba, the skin that forms on the outside of tofu, also seems to appeal to chefs, and we might be seeing more of it on menus.

Although Japanese will likely be high-end chefs’ go-to cuisine in 2011, the bold flavors of Southeast Asia — particularly those of Thailand and Malaysia — will leave their marks, too.