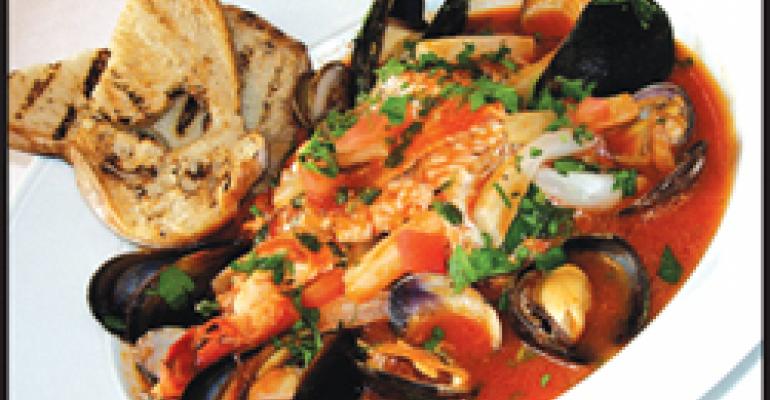 ON FOOD: Waiter, there’s a fish in my soup: Global takes on seafood stew have chefs bowled over

Malaysian assam laksa, a sour-and-spicy fish soup with rice noodles, is one of the showstoppers at Fatty Crab in New York. A simple fish soup is served at Café Soleil in New York.

And though the quintessential fish soup is bouillabaisse, which in the south of France is frequently made without shellfish, La Cachette in Los Angeles bolsters its Provençal bouillabaisse by adding mussels and clams. Antonucci in New York offers a shellfish bouillabaisse with bay scallops, oysters and crabmeat in a saffron broth. New England bouillabaisse with mussels, clams, Maine shrimp and haddock, is served at Black Pearl in New York. The West Coast bouillabaisse at Go Fish in St. Helena, Calif., contains local fish. The restaurant is owned by Ken Tominaga, Cindy Pawlcyn and Sean Knight.

The zuppa di pesce at Alga Marina in South Norwalk, Conn., is listed as a Mediterranean bouillabaisse of seafood and fish. An Italian version also is served at Tini’s Ristorante Italiano in New York, which emphasizes regional Italian specialties, with cacciucco, combining assorted fish and shellfish in tomato broth, and also skate in its own broth, with parsley, onions, white wine and garlic.

Japanese bouillabaisse, described as a hot seafood soup, is served at Katsuya in Los Angeles. And cioppino, the California version of bouillabaisse, is made with mussels, Dungeness crab and Manila clams at Salish Lodge in Snoqualmie, Wash.

In Rodney Bay on St. Lucia in the Caribbean, there is a fish broth with snapper, grouper and green figs served at the Edge Restaurant at Harmony Suites. And The Red Onion Saloon in Skagway, Alaska, serves a coconut and snow pea soup with spot prawns and king crab.

Ordinary soups are sometimes restyled as fish soups. Riingo in New York, for example, takes the classic Japanese miso soup and dresses it up with oysters and fresh tuna. And at Klee Brasserie in New York, blue crab gazpacho gives the ubiquitous Spanish soup a new personality. The pot-au-feu at Old House Restaurant at the El Dorado Hotel and Spa in Santa Fe is made with blue lobster, sweetbreads, mushrooms and walnuts.

At Sunset Beach in Los Angeles, the choices of seafood soups include both New England and Manhattan clam chowders, and a sweet corn and seafood chowder. New England clam chowder is also a staple at John’s Café in Woodbury, Conn. And zuppa di cozze, mussels in broth, is on the menu at the new Rao’s in Caesar’s Palace in Las Vegas.

Chefs even serve miniature portions of fish soups. At their James Beard Foundation dinner this month, Anthony Bombaci and Paul Pinelli of Nana at the Hilton Anatole in Dallas sent out trays of baked potato and lobster soup shooters with sour cream foam. And last fall, Vincent Chirico of Frederick’s on Madison in New York treated Beard House guests to lobster cappuccinos before dinner.