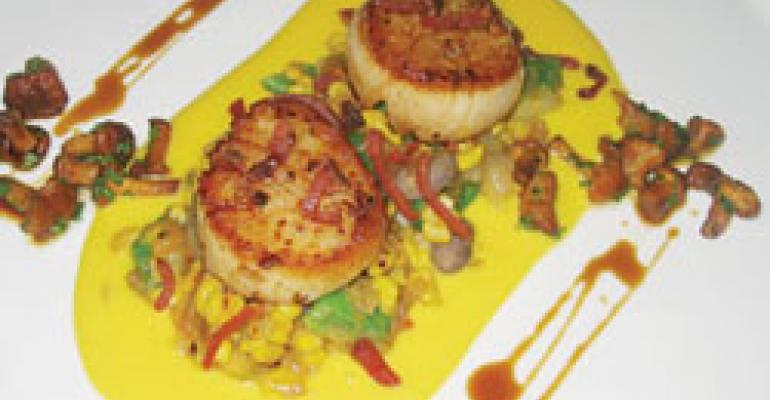 The settlers in the New World adopted few dishes from the culinary repertoire of the Native Americans. Yet succotash may be second only to popcorn on the list of such dishes that have maintained popularity over the centuries.

Succotash is a name for corn in the language of the Narragansett Indians of Rhode Island, who made their succotash with dried beans and dried corn and often bits of meat. The dish evolved but largely remained a simple combination of lima beans and corn.

Despite the fact that dried ingredients were originally used, making succotash a dish for all seasons, the modern version is usually made with sweet corn and fresh beans, and not necessarily lima. With those components as a starting point, chefs now consider succotash to be a summer dish, made when local sweet corn is available.

Despite its New England roots, succotash is also popular in the Southeastern states, particularly when it’s made with local peas and beans. Blue Marlin in Columbia, S.C., opts for butter beans with corn and tomatoes in a succotash to go with grilled wahoo and sautéed spinach. Cha Bella in Savannah, Ga., serves black grouper with a succotash of farm peas, sweet corn and crabmeat.

At Cypress Low Country Grill in Charleston, S.C., butterbeans, crowder peas and ramps are included in succotash, which is made with dried corn, or hominy, and sautéed to serve with roast pork shoulder and a hot mustard glaze. A succotash made with lady peas and served with flounder is a specialty of Highlands Bar and Grill in Birmingham, Ala.

Other times the corn takes center stage. Park Avenue Summer in New York, an operation that varies its decor and menu according to the seasons, is offering a veal chop with summer corn succotash. Olana in New York serves soft-shell crabs with local corn succotash and apple-smoked bacon. A country ham succotash with fried okra comes with the seared sea scallops at Lever House in New York.

There’s a sweet-corn succotash on seared polenta with barbecue butter to accompany jumbo shrimp at Nook in Los Angeles. Roasted chicken with sweet-corn succotash seasoned with herbs and garlic is a summer dish at Woodlands Resort and Inn in Summerville, S.C. At Eighty One in New York, the corn for the succotash is a purée, with beans, ramps and lamb’s quarters to go with whole grilled daurade.

Places with Native American heritage are smart to serve succotash. In Santa Fe, N.M., at Corn Dance Café, a “three sisters” succotash has squash in addition to corn and beans. And at Mohegan Sun in Uncasville, Conn., a Native American resort and casino, Michael Luboff serves striped bass with succotash.