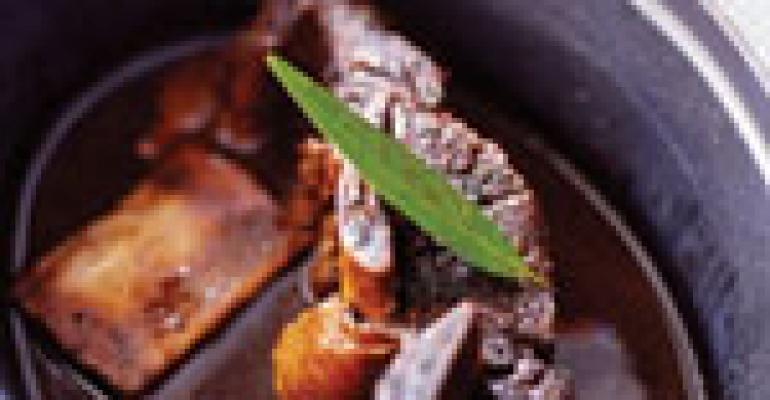 On Food: Short ribs stand tall and share menus with side items from cole slaw to truffles

Among succulent, tender comfort foods, slowcooked short ribs of beef continue to reign. As with beef cheeks and oxtails, short ribs’ appeal lies in the richness of their texture and flavor. And these days, their stew-pot personality suits high-end menus as well as the more casual ones.

Gray Kunz was one of the first chefs to elevate lowly short ribs to prominence at Lespinasse in the St. Regis hotel in New York back in 1991. They became a signature, and they are also on the menu at his new place, Grayz, also in New York.

Since that notable start, they have become a staple. There’s a braised short-rib sandwich with horseradish coleslaw and fries on the comfort food menu at restaurant BLD, which stands for Breakfast, Lunch and Dinner, in Los Angeles. Braised short ribs are an alternative to various cuts of steak at Laurent Tourondel’s rapidly multiplying BLT Steak concept.

Short ribs also make an appearance at the Liberty House restaurant in Jersey City, N.J., where they are braised in red wine and are paired with polenta with Asiago cheese and porcini mushrooms. Nectar in Burlingame, Calif., divides its menu into smaller and larger plates, and among the larger ones is grass-fed braised short ribs. During white-truffle season, braised short ribs of beef were served with truffled white grits and Vidalia onions in tempura batter at Café Joley in Boca Raton, Fla.

Braised beef short ribs share the menu with everything from cheese plates to pizzas to barbecued pork at Jim Noble’s Rooster’s in Charlotte, N.C. At his concept Noble’s in the same city, the short ribs are served with fingerling potatoes and heirloom tomatoes.

Beef short ribs alla vaccinara, or butcherstyle, a Roman dish that is usually made with oxtails, are on the menu at SPQR in San Francisco. Cooper’s Tavern in New York braises short ribs in spices and serves them with mashed parsnips in a horseradish cream sauce. At 40 Sardines in Overland Park, Kan., a suburb of Kansas City, braised short ribs are seasoned with tamarind and served with French green lentils and oven-roasted mashed plantains and bananas.

At Café Cluny in New York, braised short ribs are given the luxe treatment with foie gras alongside. And last fall for the Emmy Awards, Joachim Splichal of Patina in Los Angeles paired short ribs braised in red wine with more elegant filet mignon.

Short ribs off the bone can be incorporated into pasta. There is a short rib ravioli dish on the menu at Telepan in New York. Market Table, also in New York, makes its gnocchi with short ribs and escarole in a Parmesan broth. Nick & Toni’s in East Hampton, N.Y., uses short ribs to dress penne pasta. Similarly, at davidburke & donatella in New York, short ribs come with wild mushroom cavatelli and truffle mousse.

It also probably comes as no surprise that a place named Shorty’s 32 in New York would serve short ribs. That restaurant braises them and serves them with elbow macaroni and baby leeks.