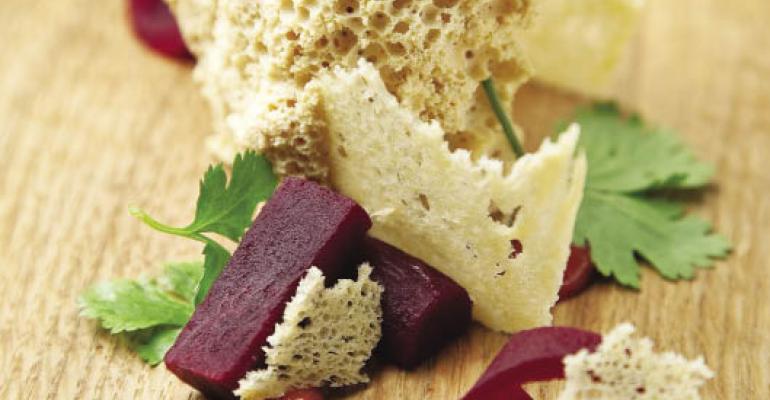 For a restaurant made famous by avant-garde cuisine that challenges traditional expectations of what food “should be,” wd~50 in New York has a menu that seems wholly nonthreatening.

The descriptions are couched in comfortingly familiar terms. For example, there’s an “everything bagel” served with smoked salmon “threads” and “crispy cream cheese,” which, although somewhat unusual sounding, incites more curiosity than trepidation.

Nowhere does it mention that the “bagel” is actually ice cream.

That’s what makes chef-owner Wylie Dufresne’s cuisine so special: It reimagines the norm and questions established assumptions about how food ought to be prepared.

And, generally, to great effect. Wd~50 has had a Michelin star since 2006 and been included in more “best of” lists than you could shake a cube of gelled root beer at.

The restaurant, named for Dufresne’s initials and the building’s street address, opened in April 2003 with help from partners Jean-Georges Vongerichten and Phil Suarez, both respected fine-dining restaurateurs and former employers of Dufresne’s.

Dufresne said the entire venture was a product of his desire to evolve as a chef.

“I wanted to understand what was happening to food as I was cooking it so that I could make better decisions about how to cook it,” he said. “Really, it was my curiosity that brought me to this style of cooking, because this type of cooking is bringing answers to the table, and that’s really what I want.”

And the kitchen at wd~50 offers an ideal experimentation platform, consistently turning out innovative takes on old favorites.

“Wylie is not a chef who rests on his laurels,” said Ryan Sutton, . “Take his foie gras. He’s probably done more for foie gras than any other chef in the city. I remember back in 2005 he was freezing it into a hollow disc of sorts, so when you cut into it, passion fruit would start oozing out. … I came back a few years later, and he was tying a short ‘rope’ of foie gras into knots — literally.”

From the chef: In their own words

Since wd~50 chef-owner Wylie Dufresne was first nominated in 2000 by the James Beard Foundation as Rising Star Chef of the Year, his stock has been climbing steadily. Dufresne talked to Nation’s Restaurant News about how he got involved in his current pursuit — avant-garde cuisine — and why “molecular gastronomist” is not an appropriate term for a chef.

How did you become involved in this style of cooking?

It was sort of a looking for answers to questions, and realizing that I would have to go outside the traditional avenues that the chef has. I wanted to continue my education; I wanted to understand what was happening to food as I was cooking it, so that I could make better decisions about how to cook it, and the answers were not within my own community. I had to go outside my community to find those answers and develop relationships with food scientists and commercial food processors, etc.

Did you test anything like the cuisine you serve now when you were at 71 Clinton Fresh Food or Jean Georges?

I think that all of this is just a natural evolution of myself as a cook. I think that I’ve always been curious and interested, and as my duties grew and as I actually began to be out on my

own and not under someone else’s umbrella, I could ask more questions [of the food I was cooking] and look for more answers and dedicate more time to this sort of thing.

Are you among those chefs who think the term “molecular gastronomy” is too scientific to be used to describe the dishes you create?

It doesn’t sound delicious either; that’s my other complaint. If you’re thinking about where to go out to dinner tonight with your friend, and you say, “Do you want to go have some Thai or some Italian or some molecular gastronomy?” it doesn’t sound like we’re ever really going to have a chance.

Do you think the dining public is getting more adventurous?

I think the world is getting smaller, so people are more aware of what’s happening everywhere, and so I think the diner today is much more informed and much more current on eating trends around the globe than they were a decade ago and five decades ago.