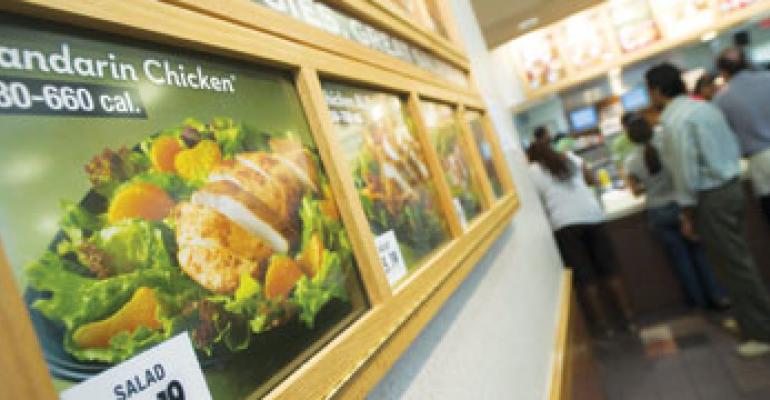 Chain restaurants in the United States are one step closer to learning the details of the new federal menu-labeling law.

According to guidelines disclosed by the Food and Drug Administration this week, slight variations to a restaurant chain’s name will not exempt the brand from federal menu labeling regulations; menu items available for less than 60 days won’t have to include calorie or other data; but fountain sodas will have to be labeled with nutritional information.

Those are just a few of the details provided as guidelines for federal menu-labeling regulations. The agency is seeking comments from the foodservice industry before nailing down the final rules.

Plans for national nutrition disclosure from restaurant chains were included as part of the health care reform bill that President Obama signed into law March 23. Under the law, restaurants and similar food establishments and vending machines with 20 or more locations doing business under the same name and offering “substantially the same menu items” must disclose the number of calories of each standard menu item. The information must be shown on menus and menu boards or adjacent to self-service food and food on display.

The FDA said the guidance, which it published Tuesday, indicates its current position on how restaurants should comply with the law. It is soliciting comments over the next 45 days before issuing the final regulations, which it must do by March 23, 2011.

National Restaurant Association public affairs specialist Dan Roehl said the association would be working with its members to collect feedback on the FDA’s guidance.

He said restaurants should not act on the proposed regulations until final rules are in place.

The FDA noted that it would not begin taking action against restaurants that do not comply with the law until a period of time after the final rules have been issued.

Details of the guidance, which can be viewed in its entirety here, include:

• Slight variations in a restaurant's name, such as “ABC” and “ABC Express” don’t exempt companies from the law.

• Changing the name of a menu item does not exempt it from coverage if it uses the same basic recipe of a standard item.

• Takeout menus and online menus should include calorie information.

• Chains with 19 or fewer units are not required to comply but may do so voluntarily by registering with the FDA.

• Corporate caterers that operate 20 or more units but tailor the menus to each client are not required to comply, nor are operations that cater individual events.

In addition to a restaurant's regular menu, other items that must include calorie data postings include:

• Self-service items such as those at salad bars, buffet or cafeteria lines or beverage fountains.

• Any food on display, whether self-service or accessed by restaurant staff.

Items that don’t require calorie information to be displayed include:

• Condiments and “other items placed on the table for general use.”

• Temporary items that appear on the menu for fewer than 60 days per calendar year.

• Custom orders that require deviation from standard preparation. The FDA cited as examples a Cobb salad without bacon or a “fast-food hamburger” ordered without the usual toppings.

• Food that is part of a market test that appears on the menu for fewer than 90 days.

• Pre-packaged food with complete nutrition labels that customers can examine before purchase.

The FDA said it would issue recommended language for “variable” menu items, such as pizza prepared to order with a choice of toppings and ice cream with more than one flavor listed or displayed, in its final rule.

Part of the legislation also calls for chains to post a statement regarding the recommended total daily caloric intake per person, as well as to state on their menus and menu boards that additional nutritional information is available in written form.

This week, the FDA also issued guidance indicating that the proposed federal guidelines will overrule menu-labeling laws in local or state jurisdictions in the United States.

That guidance can be seen here.

The NRA’s Roehl said the association was very encouraged by the FDA's stance.

Written comments on the guidance should be submitted to:

Electronic comments may be submitted to http://www.regulations.gov.

All comments should be identified with docket number FDA-2010-N-0298.