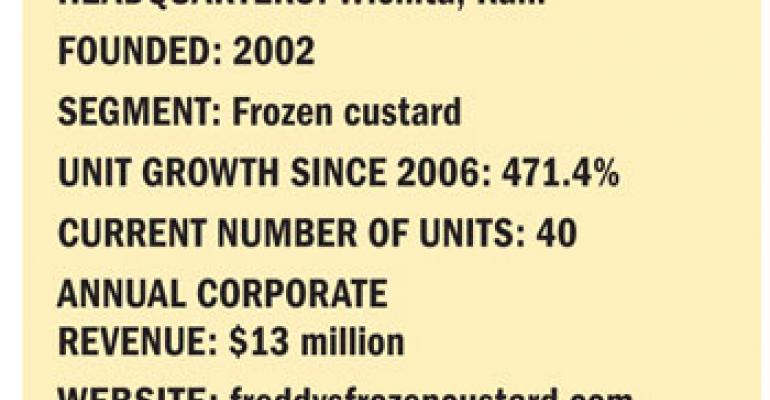 From just four locations in operation in Kansas at the end of 2004, Freddy’s Frozen Custard & Steakburgers has grown to 40 restaurants across eight states.

In an interview earlier this year with Nation’s Restaurant News, Freddy's president Bill Simon said the chain strives to give customers "a full-service mentality in a fast-casual setting." He cited a dual focus on service and quality as a key reason why Freddy’s was able to grow sales during the U.S. economic downturn.

"I believe that, due to the quality of the Freddy’s food and experience, we have picked up some of the sales that have been lost in casual dining as a repercussion to the economy and high jobless rate," he said.

In its quest to expand, Freddy's faces competition from brands like the 485-unit Steak n Shake, which has returned to positive sales under the leadership of chief executive and well-known activist investor Sardar Biglari.

As a special offer to readers of Nation's Restaurant News, a $210 discount off of any Chain Store Guide chain restaurant database or directory is offered through June 1, 2010. Access Chain Store Guide's in-depth profiles of the top 7,100 restaurant chains with more than 31,000 contact names and 12,000 personal e-mail addresses for the top executives, chefs and decision makers in the restaurant industry. To take advantage of this special offer, visit Chain Store Guide and use the promotion code 210NRN at checkout.