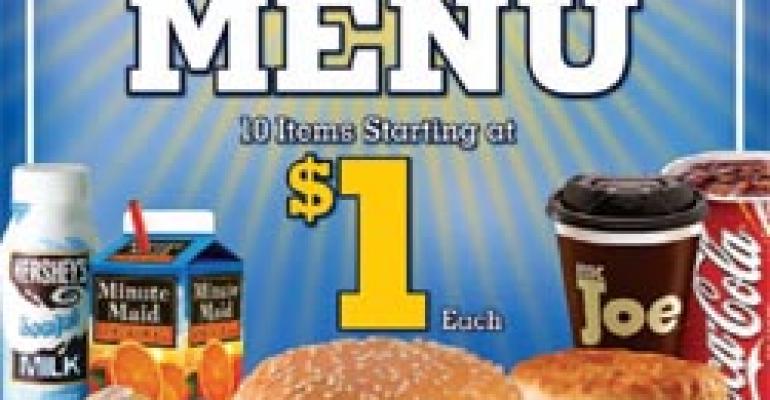 When it comes to outshining the competition, quick-service chains constantly are looking for new ways to do just that in order to keep loyal consumers coming back and to lure in new ones. And in recent months, breakfast has become the latest battleground for customers' dollars.

According to data from the NPD Group, a Port Washington, N.Y.-based market research firm, servings of breakfast foods are up 64 percent over the past five years. As a result, quickservice chains are expanding their breakfast menus in an effort to give consumers what they're looking for.

Hardee's, a 2,004-unit subsidiary of Carpinteria, Calif.-based CKE Restaurants Inc., recently debuted the Breakfast Club Sandwich, featuring slices of roasted turkey breast, bacon, shaved ham, American cheese and a folded egg, all served on grilled sourdough bread. The new breakfast sandwich is priced starting at $2.59 — or at $3.99 for a small combo including hash rounds and a drink.

"We have had a great deal of success on our lunch/dinner menu by combining the great tastes of classic American sandwiches with the all-American burger, as we did with last year's Philly Cheesesteak Thickburger, so we understandably wanted to give the same approach a try at breakfast," said Brad Haley, Hardee's executive vice president of marketing. "A Breakfast Club Sandwich seemed like a natural, since most of the ingredients found on a traditional club sandwich, like ham, bacon and cheese, were already staples at breakfast." Hardee's also rolled out the Monster Biscuit, a morning version of its popular Monster Thickburger oversized sandwich.

The breakfast offering consists of four slices of ham, a sausage patty, three half-strips of bacon, a folded serving of scrambled egg and two slices of cheese, all piled atop Hardee's signature biscuits. The Monster Biscuit is selling for about $2.49 or as part of a combo that includes hash browns and a drink for $3.89.

Hardee's sister chain, Carl's Jr., also has bolstered its breakfast menu. The 1,042-unit chain added the Steak & Egg Burrito in February. The hearty burrito, which is priced at $2.99, features scrambled eggs, grilled steak, pepper Jack cheese, a blend of shredded Jack and Cheddar cheeses and freshly made salsa, all wrapped in a warm flour tortilla.

"Developing the breakfast menu at Carl's Jr. has been a key emphasis for us over the past few years — and it shows," Haley said. "We've now got an impressive lineup of early-morning offerings, and we don't even carry English muffins." Earlier this year Miami-based Burger King rolled out its BK Breakfast Value Menu, which allows customers to choose from 10 items starting at $1 each.

Some of the options include the Hamlette, featuring egg, ham and a honey butter sauce on a sesame seed bun, and the Enormous Omelet Sandwich, featuring bacon, sausage, American cheese and eggs on a split-top bun.

Also on the Value Menu are BK's French toast sticks, with three to an order; a sausage patty on a biscuit; a small hashbrowns patty; Cini-minis miniature cinnamon rolls; a small BK Joe coffee; a 10-ounce serving of milk; orange juice; and a 16- ounce soft drink.

In April the 11,100-unit chain posted its 13th consecutive quarter of positive same-store sales, with quarterly revenues up 9 percent, to $539 million.

John Chidsey, Burger King chief executive, credited the Breakfast Value Menu for part of the sales uptick and said that early results of the new program "are encouraging."

In addition, Burger King extended its BK Joe premium coffee line with the introduction of an iced, chocolate-flavored version. The Mocha BK Joe Iced Coffee, consisting of coffee blended with chocolate syrup and poured over ice, debuts at a time when Burger King rival McDonald's is extensively testing specialty coffees and espresso drinks following a boost in coffee sales since the chain upgraded its coffee last year.

And McDonald's Corp., based in Oak Brook, Ill., is beefing up its morning offerings as well. President and chief operating officer Ralph Alvarez told investors earlier this year that the chain is considering the addition of smoothies and specialty coffees, including an iced coffee.

Coffee sales have risen 15 percent since the the chain's launch of an upgraded coffee blend, Alvarez disclosed to Nation's Restaurant News in February. Alvarez also told NRN that McDonald's plans to roll out a cinnamon melt, a warm sweet roll with cinnamon glaze, to 11,000 of the chain's 13,700 domestic units this summer.

There also has been speculation that McDonald's might start serving breakfast all day, though the 30,000-unit chain has yet to confirm this. McDonald's chief executive Jim Skinner did hint at an investment conference late last year that a new kitchen setup may allow the hamburger behemoth to serve breakfast all day, according to media coverage of the event.

Starbucks, which has long been the front-runner in the coffee arena, now has joined the quick-service breakfast brigade as well. The Seattle-based coffee-chain operator has begun offering hot breakfast sandwiches in at least six markets: Seattle; Washington, D.C.; Portland, Ore.; San Francisco; Chicago; and New York.

Some of Starbucks' breakfast choices are: a sausage, egg and aged Cheddar cheese sandwich on a toasted English muffin; eggs Florentine with baby spinach, egg, Havarti cheese and herb spread; Black Forest ham, egg and Cheddar; and a reduced-fat sandwich with turkey bacon, cholesterol-free egg and reduced-fat Cheddar on a multigrain English muffin. Prices range from $2.95 to $3.25, depending on the market.

The sandwiches currently are in more than 1,200 locations, up from 225 a year ago.

Dublin, Ohio-based Wendy's is another quick-service chain looking to boost sales with breakfast items. Officials at the No. 3 burger chain currently are testing breakfast items at about 150 stores, with plans to increase that number to at least 50 percent of the chain by mid- 2008. In earlier disclosures Wendy's, which operates or franchises 6,600 units, also had said breakfast could boost perrestaurant sales by $160,000 annually, although this has been disputed by some franchisees.

Some of the breakfast choices at Wendy's test locations are the Frescuit, which is a bacon, egg and cheese sandwich on a fresh-baked biscuit; a steak, egg, bacon and cheese sandwich; French toast sticks; and a large burrito containing eggs, meats, cheese and other ingredients.

Even Subway, typically is known for its lunch-time subs, decided to jump into the breakfast daypart. The Milford, Conn.- based chain in March rolled out a toasted omelet sandwich to the nearly 7,000 branches of the chain that already serve breakfast sandwiches. The new omelet item features a premade round omelet that is folded in half and served on bread toasted in the Subway stores' toaster ovens.

With more and more quickservice concepts focusing on the breakfast daypart, brands such as Dunkin' Donuts, which always has been a breakfast staple, have been forced to step up their menus to compete. According to the Canton, Mass.-based company, demand for breakfast throughout the day has become so high that in 2006 Dunkin' saw an increase in sales of more than 10 percent for breakfast sandwiches. So the doughnut chain, which operates or franchises more than 7,200 units, in January rolled out the Maple Cheddar Sandwich for a limited time.

The Maple Cheddar Sandwich featured a scrambled egg and a sweet maple-flavored sausage patty on a warm freshly baked croissant and topped with a slice of melted white Cheddar cheese.

"The Maple Cheddar Sandwich continues Dunkin' Donuts' popular tradition of serving breakfast all day," said Robert Rodriguez, Dunkin' Donuts brand president. "Our research shows that not only do our customers love our fresh, on-the-go breakfast options, but they especially love the fact that they can get these sandwiches around the clock — whenever they crave a tasty, satisfying sandwich and when it is convenient for them."

Dunkin' Donuts isn't the only chain offering customers breakfast all day. San Diego-based Jack in the Box has been serving all-day breakfast since the chain's debut more than 50 years ago. In fact, the chain credits itself as offering the first breakfast sandwich in the QSR arena in 1969.

Jack in the Box continues to strengthen its breakfast menu with numerous additions. The chain recently added two new Buttermilk Biscuit Sandwiches — the Bacon, Egg and Cheese and the Sausage, Egg and Cheese. Both sandwiches, priced at $1.99, feature an egg, American cheese and a choice of either bacon or sausage tucked into a buttermilk biscuit.

The more than 2,000-unit Jack in the Box also added Minute Maid Orange Juice to its menu, priced at $1.49, as well as the Bacon Breakfast Jack, a sandwich featuring bacon, a fried egg and American cheese, served on a warm bun.