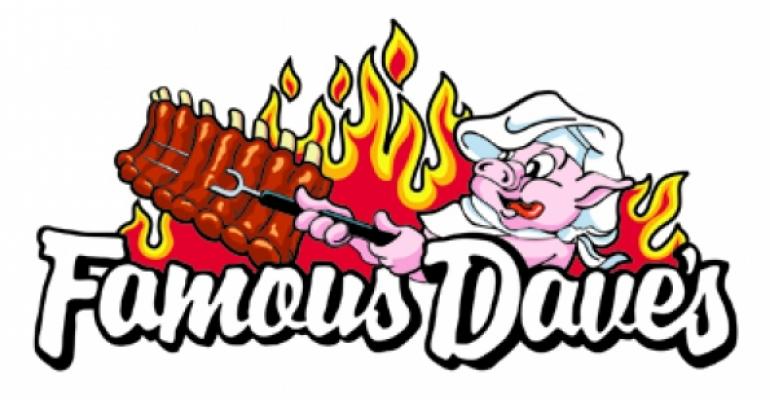 The company opened 10 restaurants in 2011, and is looking to open as many as 15 units in 2012, O’Donnell said. One of those restaurants will be Famous Dave’s first international unit, in Winnipeg, Canada.

At least two more locations of its “barbecue shack” fast-casual prototype, which features counter service in a slimmed-down, 65-seat space, are scheduled to open this year in the Portland, Ore., market.

The first fast-casual prototype opened late last year in Eden Prairie, Minn., not far from Famous Dave’s Minneapolis headquarters. The new format would be instrumental to accelerating growth in future years and reaching the company’s potential for 400 to 500 domestic locations, O’Donnell said.

“We look at it as a future of about five to seven years,” he said. “We anticipate that the counter-service model will help as a blend [with traditional units]. We see the opportunity for 400 new locations domestically, and the additional 100-unit variance is up to how we utilize the counter-service prototype.”

The barbecue shack prototype would give current and future franchisees a way to further diversify their restaurant and real estate portfolios, he added.

“We certainly still want to continue providing some options [for franchisees], and we’re seeing nice success with the Eden Prairie location,” O’Donnell said. “It’s early, but the prototype has the opportunity to be an additional growth vehicle that would get us into tier-two markets and let franchisees solidify their positioning and grab market share.”

Chief financial officer Diana Purcell added that Famous Dave’s is offering an incentive to franchisees of 50 percent off the franchise fee if they can open a new barbecue shack location this year “to generate interest and support for that footprint.” No other royalty reductions, which the company has used in the past, are in place at this time, she said.

Famous Dave’s operates 54 restaurants and franchises another 132 locations in 36 states.