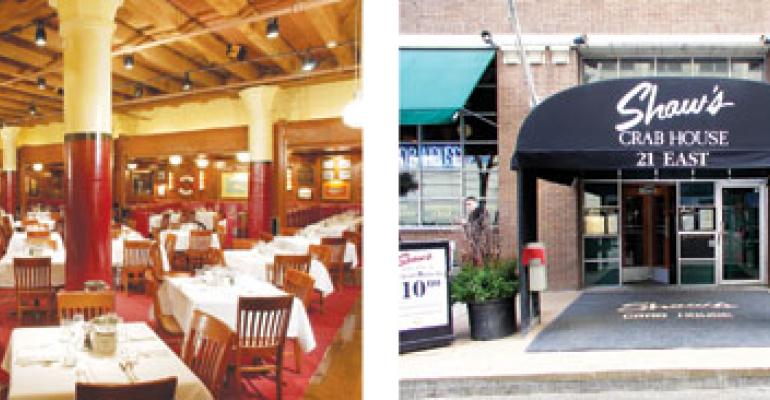 Just as fading movie stars go under the scalpel to improve their looks, older restaurant operations are following suit, modernizing their decors, service styles, menus and operations to expand their fan base. Facing abysmal economic conditions and more demands from time-strapped consumers, operators are re-engineering their businesses from the front-of-the-house to the back to make their restaurants not only venues for sustenance, but more usable workspaces away from the office and resting places away from home.

Still, some observers question whether such initiatives are enough given the extent of the malaise now affecting the industry, especially in the case of dinnerhouses.

“Being in casual dining these days is like being in the horse-and-buggy business when the car was created,” says Aaron Allen, president and founder of Quantified Marketing Group, an Orlando, Fla.-based brand strategy consulting firm that specializes in foodservice design and branding issues. “For some chains, remodeling is not going to be enough. What’s needed is an entire, wholesale rethinking on how they run their businesses, starting with their unit economic models. It’s not just refurbishment anymore, but real evolutionary changes needed to save brand identity and, frankly, a lot of players in casual dining will run out of second chances very soon.”

Other observers say, however, that operators who are re-engineering their brand images now are making necessary investments that should pay off in the future.

“You know, there are a lot of tired concepts out there, and while most good operators are scrupulous about maintenance, repair and replacement, there comes a point in time when it becomes crucial to the brand that an old concept start looking like a new concept,” says Tim Trapp, principal and founder of Trapp Associates Ltd., a Boulder, Colo.-based architectural and design firm that specializes in restaurant and hotel projects.

The company has been the lead designer in a host of restaurant chain startups, such as Rock Bottom Restaurant and Brewery, and has managed the systemwide makeovers of such brands as Tony Roma’s.

“For companies with the money and financial strength, a recession is great time to retrofit,” he says. “You’ve got tradesmen who are hungry and ready to work, landlords might help finance some deals, and best of all, traffic will pick up because people want to see what’s new.”

That’s what Atlanta Bread Co. is counting on. For the past several months, the Smyrna, Ga.-based company has been overhauling older units to conform to a new contemporary prototype and upgrading its menu.

The company is following a design template shaped largely by consumers in focus groups three years ago. Those consumers said they wanted a more relaxed atmosphere; larger, roomier and more comfortable seats; an electrical outlet at every table; WiFi connectivity; and more seclusion in their seating choices.

Jerry Couvaras, president, and his brother, Basil Couvaras, chief operating officer, say it made no sense to remodel the units without upgrading the menu, too. To that end, items have been given upscale twists, such as the Salsa Fresca Salmon Salad with salmon, fire-roasted black bean and corn salsa, and pineapple-mango vinaigrette.

“I think the focus group helped us realize that our heavy users don’t see Atlanta Bread as a restaurant but more as a gathering place that fits different lifestyles,” Basil Couvaras says. “I mean, we might have a real estate salesman stopping by for a sandwich and coffee between deals or showing a house in the afternoon, a mother feeding her kids on the way to soccer practice after school, and high schoolers stopping by for our new lines of pastries and cookies in the mornings.

“In almost every case, everybody is on an iPod, Blackberry or some other PDA, and why? Because everybody is time-poor.”

Depending on the size of the unit’s footprint, Jerry Couvaras says the remodels range in cost from a low of $80,000 to as much as $250,000. Of the chain’s 140 units, of which about 100 are franchised, 25 percent have been retrofitted and carry the new menu.

Jerry Couvaras notes that some operators have seen sales rise by 9 percent following a remodel.

“It’s not just a remodel,” Basil Couvaras says. “It’s a whole brand re-imaging. We could have said, ‘Let’s be an American bakery, or an Italian bakery or a Greek bakery.’ But we see ourselves now as a global bakery.

“We’re determined to be the segment leader in the bakery-cafe casual segment.”

In both cases, Dellar says the redesigns are intended to appeal to younger guests through a more contemporary design package and beverage offerings.

In the case of 200-seat Lake Creek Walnut Creek, Dellar says the former Americana-theme decor, which featured ornate birdhouses, dark woods and a country motif, is being brightened with a lighter color palette of taupe, butterscotch and coffee tones. The bird-houses will be replaced with hand-blown glass art pieces, and the restrooms, which featured car ads from the 1930s, will be re-decorated with contemporary art.

In another big change, the restaurant is going to replace the stark, dark old men’s club seats in the outdoor-dining with rattan furniture.

Dellar estimates that the retrofit would cost about $150,000.

At Yankee Pier, the focus of the renovation is to turn what had been a three-stool bar and waiting area into a more prominent 10-stool bar. Dellar says the change was inspired by the eatery’s sales trends, about 70 percent alcohol to 30 percent food. Moreover, within the alcohol sales, spirits sell better than wine.

“Both of these restaurants have negative comps, as do everyone else around us,” Dellar says. “But we wanted to remain competitive, and so this is what happens when the economy pushes you a certain way.”

In what is becoming a common practice, Dellar says neither restaurant will close during their makeovers. All the work will take place after hours.

Trapp, the restaurant architect with the Lone Star contract, says two Chicago-area units he is working on—one in Joliet, Ill., and the other in Rockford, Ill.—both are being overhauled at night. But while there are exposed ceilings, unpainted rooms and unfinished floors, guests appear to be flocking to the units in greater numbers than ever, he says.

“In the old days, operators would have been embarrassed by unfinished remodeling projects that their guests could see,” he says. “But, like a menu change or hiring a new chef, I think some guests see this work as an admirable thing, that the operator really cares about the business and their guests’ comfort. So they want to see what’s going on.”

When the work is finished, Lone Star will look more like “a genuine, honest steakhouse,” Trapp says. “We’re getting rid of some of the gimmicks, like the peanut shells on the floor.”

For years, most Lone Stars have featured barrels of roasted peanuts that guests could dip pails in to fill for snacking on while waiting for seats or nibble on between courses. The shells were brushed onto the floor.

“Instead, guests will get two pails: one with peanuts and one empty for the shells,” Trapp says. “Probably won’t stop the floor shells entirely, but it’s a start.”

Sara Rowe, a vice president and partner of the 400-seat Shaw’s Crab House in downtown Chicago, says that rather than allocate a block of time to remodel the 25-year-old business, Lettuce Entertain You is in a perpetual state of renewing the decor and updating the menu. She notes that guests generally don’t notice or are rarely inconvenienced by it. Rowe adds that the continual re-engineering allows Shaw’s to incorporate contemporary or trendy design features and furnishings without sacrificing the brand’s signature image in one fell swoop.

Pointing to the two Shaw’s outposts in Chicago, Rowe says that the restaurants’ incorporation of a sushi bar a few years back to meet customer demand was a dramatic example of advancing the look of the institution without marring the brand’s appeal.

“In an economy like this, we think a constant focus on staying fresh makes you highly competitive,” Rowe says, “and like any good athlete, you want to be the last man standing, and by that I mean we don’t want our guests to feel that there is a better place to dine, be it a family meal, something romantic or a corporate event.

“We never let up evolving our business. We’re always tweaking something. We’re constantly in the pursuit of getting it right, and that includes the menu, too.”