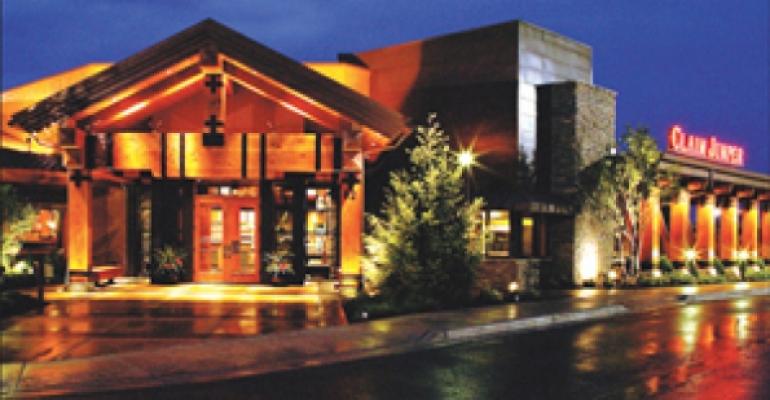 As national players in the bar-and-grill segment struggle with dipping sales, several of the sector’s high-volume regional chains out of Southern California are intensifying national expansion efforts.

BJ’s Restaurants Inc., whose 57 casual-dining outlets feature Chicago-style pizza and craft-brewed beer, last month opened its first Eastern branches, in Florida and Ohio. Analysts predict that the Huntington Beach, Calif.-based chain could grow into a system of 300 to 400 restaurants from coast to coast.

Claim Jumper, a 42-unit casual-dinnerhouse chain based in Irvine, Calif., known to have a per-restaurant sales average second only to The Cheesecake Factory’s among major competitors, also has established a presence in the new markets of Chicago and Portland, Ore., over the past year and expects to open in the Milwaukee area in 2008. The chain’s expansion plan escalated last year when the Los Angeles-based private-equity firm Leonard Green & Partners LP paid $200 million to acquire Claim Jumper.

Yard House, another Irvine-based chain, boasts a more upscale-casual dining format and the purported “world’s largest” variety of draft beers, but its newest claim to fame could be the more down-market Yard House Bar & Grill variant, which 17-unit Yard House plans to debut next year in Chino Hills, Calif. Chain founder Steele Platt describes the new format as a “Mini-Me” version of his original concept.

All three chains’ developments come at a time when such bar-and-grill giants as Applebee’s, Chili’s and T.G.I. Friday’s are struggling to hold onto slipping market shares in what analysts describe as an overcrowded casual-dining category.

Companies like BJ’s—which was founded in 1978 in Santa Ana, Calif., and now is led by a former president and chief financial officer of The Cheesecake Factory chain, Jerry Deitchle—may not face the same pressures as the more mature bar-and-grill brands.

Sometimes described as a “little brother to The Cheesecake Factory,” BJ’s averages annualized per-restaurant sales of $4.4 million to $5.5 million at its newer branches. Analysts say the concept stands out from the crowd because it offers a high-quality experience as a point of differentiation from some larger chains.

Over the past two years, chief executive Deitchle said, BJ’s has been ramping up quality in order to place the chain in what he calls the “casual-plus” niche. He also has focused on building a management team whose members have experience with larger rivals like California Pizza Kitchen, Olive Garden parent Darden Restaurants and Chili’s parent Brinker International.

BJ’s, with an average per-guest check of $11.11, falls above Applebee’s, at about $10.75, but below Ruby Tuesday, at $11.50, while still offering what analysts call a “Cheesecake [Factory]-like experience.” Beer and pizza, both of which are high-margin items, account for roughly 40 percent of BJ’s sales.

In March, BJ’s opened a unit in the Tampa, Fla., area and added another in Columbus, Ohio—both markets that are regarded widely as testing grounds for Middle America. Analysts say the performance of those units would be a litmus test of BJ’s chances for breaking out of the Southwest as a national player.

Eleven more BJ’s are scheduled to open this year, including two in Oklahoma, three in Texas and two more in Florida. While in the past, BJ’s restaurants have used variations on the name, new units going forward all will be called BJ’s Restaurant & Brewhouse.

One positive sign for BJ’s, analysts noted, is that its same-store sales outside California have increased at consistently higher rates than those within the chain’s home state.

The company has no debt, and last year it raised $61 million in a private placement that has offered a solid base of expansion capital. Deitchle also has stressed that BJ’s has reported 41 consecutive quarters of positive same-store sales.

Eric Wold, an analyst with Merriman Curhan Ford in New York, described BJ’s as a “core holding” for any restaurant investment portfolio, given the company’s “continued strength of concept, even during tough times, exceptional unit economics, potential for improving operating margins, and increased efficiencies.” Those attributes would become even more attractive as the brand moves into states with lower labor costs than California, Wold noted.

However, Deitchle sees room for improvement. BJ’s currently generates about 5 percent of its sales from off-premise business, and he would like to see takeout business increase to around 10 percent.

Over the next six months, the company plans to re-engineer certain aspects of takeout operations, such as making separate pickup entrances more visible with better signage. BJ’s also is looking at using hand-held point-of-sale devices to allow takeout customers to pay from their cars. The chain also is testing an online ordering system.

Large parties also are being targeted. Newer BJ’s units have dining rooms with seating for up to 90, and buffet menus are being revamped to draw in graduation parties, business meetings and other big groups.

BJ’s is also moving away from its brewery-restaurant model. Currently, 12 restaurants include breweries, which also supply the nonbrewery units. However, last year the company built a new production brewery in Reno, Nev., with annual capacity to produce 15,000 barrels, compared with 27,000 barrels produced by the 12 microbreweries. As the new Reno plant gears up, Deitchle said, some of the smaller in-restaurant breweries might be decommissioned.

Down the road Deitchle said BJ’s would also look for a strategic partner to manage the distribution of grocery products. The chain’s signature Pizookie dessert—a large shareable cookie presented at the table like a pan pizza—has been test-marketed in Costco stores in Southern California.

Claim Jumper, which celebrates its 30th anniversary this year, also has been building recognition of its brand through the sale of grocery products across the country, especially its signature six-layer Chocolate Motherlode Cake.

With average annual unit volumes of about $7.1 million, Claim Jumper operates primarily in California, Arizona, Colorado and Nevada, but its moves into Oregon and Illinois have shown promise for further expansion outside the Southwest, said Larry Bill, the chain’s director of public and community relations.

Moderate growth is expected, however, with about four units scheduled to open per year. On tap for openings in 2007 are the chain’s third branch in the Chicago area, two more in Portland and a unit in Las Vegas.

“We’re going to continue to explore expansion into the Midwest,” Bill said, noting that sales in the Chicago-area units are equal to those in Claim Jumper’s core market of California. “But there’s still tremendous opportunity on the West Coast.”

With an average check of $14 at lunch and about $19 at dinner, Claim Jumper is competing more directly with The Cheesecake Factory, whose average ticket is $17.50.

Like BJ’s, Claim Jumper also is experimenting with online ordering for takeout, as well as curbside pickup. Also, for the first time this year, the chain began allowing guests to make reservations.

Yard House, meanwhile, will test its smaller bar-and-grill concept as a potential growth vehicle for secondary markets that can’t support the typical 10,000-square-foot restaurants for which the brand has become known. The bar-and-grill variant will likely offer only about 40 draft beers, less than half the variety featured by the chain’s core brand, and about 50 menu items, including some best sellers from the flag-ship concept. The first bar-and-grill unit would be about 6,200 square feet and have about 210 seats. Prices would be about the same as the main concept. Yard House officials said the company does not track average tabs, but most guests are believed to spend about $12 at lunch and $18 to $22 at dinner.