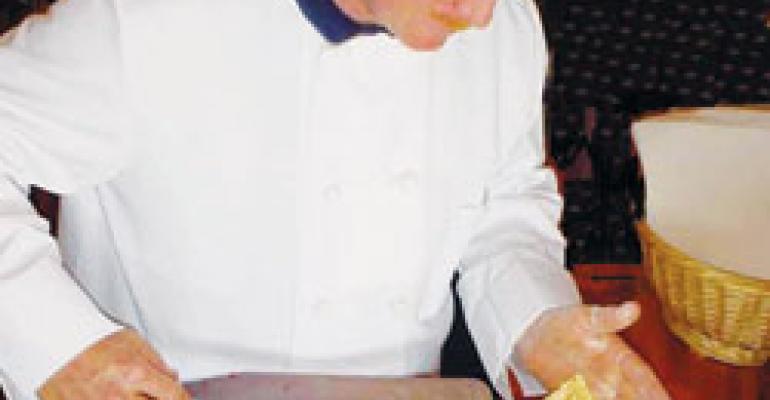 Crêpes are selling like, well, hot-cakes, according to a new wave of purveyors who are introducing updated versions of the thin French pancakes to Americans.

Across the country, new crêperies are cropping up and older crêpe concepts are looking to grow as customers clamor for a food item that is relatively inexpensive, often portable, and familiar but not ubiquitous.

“We decided that the product is so popular it was just a matter of having the right people promoting it in the right way,” said Christy Ronconi, director of executive affairs for Miami-based CrêpeMaker, a 12-unit fast-casual chain, which began franchising in 2001.

CrêpeMaker, which first opened as a cart in downtown Miami in the early 1990s, today boasts both kiosks and stand-alone restaurants. So far, 29 franchises have been sold, Ronconi said.

The concept has a busy catering business to complement foot traffic, so plans are in the works to construct a 10,000-square-foot distribution center and warehouse to service the South Florida locations, she added.

Sofi’s Crêpes, a two-unit chain in Baltimore, also is looking to expand, said owner Ann Costlow, whose marriage to a French man inspired the crêperie concept. After months of research in France, Costlow opened the first Sofi’s, a 150-square-foot unit that cost $30,000 to build in 2004.

“We located next to an independent theater, so choosing that location was paramount,” she said. “Customers could get their crêpes and take them to the theater next door, and they did. We’ve had people like Kevin Bacon, Nicole Kidman and Ted Nugent in buying our crêpes.”

Costlow said her business was profitable six months after opening, so when she set about opening her second unit she expanded to 400 square feet and added 20 seats inside and 25 outside.

Among the benefits of operating a crêperie are that the costs of goods are very low, typically less than 25 percent, and the machinery needed is minimal, she said.

“You need some refrigeration and some type of crêpe stone or griddle, and they can be electric or gas,” Costlow said. “I got the seven I have for both restaurants from France, and they cost anywhere from $600 to $1,200 each.”

She noted that compared with other types of restaurants, a crêperie is “pretty quick to open and clean up.”

Karrah Creek, owner of the recently opened It’s Just Crêpes in downtown Cincinnati, agreed that crêperies are less complicated operations. Her fast-casual restaurant is open for breakfast and lunch and offers 28 varieties of crêpes, including Americanized crêpes such as pizza and barbecue. The unit has just two commercial refrigerators, four commercial crêpe griddles and a coffeemaker.

“I don’t think I’d want to run a larger and more complicated operation,” Creek said. “It takes a lot more inventory for full-service restaurants. With my 28 crêpes, I use a limited amount of ingredients because really all we do is make crêpes.”

Creek and partner Keven Paizanoglou spent $35,000 to build the 850-square-foot location. The restaurant opened the first week of September, prompted by Greek-born Paizanoglou’s inability to find crêpes similar to those he had known in his native country.

Although Creek was concerned about opening during an economic slowdown, “people still have to eat, and are looking for something new because they were tired of the same old thing.”

“We are slammed every day for lunch,” she said.

Chicago-based Lettuce Entertain You Enterprises opened a crêpe kiosk in the Mall of America in 2003, and LEYE later opened a second unit in a mall in North-brook, Ill. Called Magic Pan, both outlets use recipes from the now-defunct Magic Pan chain of crêpe restaurants. The average check at Magic Pan is $9 to $11.

Kevin Brown, LEYE’s chief executive and president, said the company does not have plans to open other Magic Pan units because “we like to do a couple things and move on.” He noted, however, that LEYE also sells crêpes at its five Mon Ami Gabi restaurants.

Glendale, Calif.-based IHOP, a division of DineEquity, has featured crêpes on its menus both as core and limited-time offerings since 1958. The 1,361-unit family-dining chain this month is promoting Fruit Crêpe Fever.

IHOP spokesman Patrick Lenow said he could not divulge sales data, “but I can tell you that crêpes are popular enough that we use them as an LTO to drive traffic.”

Fatoumata Ndiaye moved from France to Dallas two years ago.

Because of her limited English skills, Ndiaye decided to open the 52-seat Crêperie du Château, which debuted this year.

Ndiaye likens her concept to a Parisian cafe. Conceding that she’d never operated a restaurant before, she pointed out that in France children make crêpes as soon as they’re old enough to turn on a stove.

Her cafe serves breakfast and lunch daily and dinner on Friday and Saturday nights. The average check for lunch is less than $10, while brunch is about $18 and dinner is around $30, if wine is ordered.

Cuevas, who immigrated to the United States from the French Riviera in 2007 and self-funded the restaurant, said he has been encouraged by customers’ appreciation for his childhood French fare. His location and price points, which range from about $12 to $14 at dinner and just more than half that at lunch, also are helping, he said.

Not all crêperies are French.

“We thought the pfannkuchen would be a different and attractive way to bring in guests,” Uwira said. While they call their signature products crêpes, the pfannkuchen is actually a type of German pancake, he said.

“We have pancake houses everywhere in Germany, but we couldn’t use that name here,” he said. “Still, we wanted to call our main product something Americans could identify with.”

The couple invested $150,000 in the 2,000-square-foot restaurant, which has a waterfront location and authentic German furnishings. A special German pancake machine can make six of the “crêpes” at a time.

German pancakes, he explained, are sturdier than French crêpes and look more like pizza, though they taste nothing it.

“The customers are surprised, but they really like them,” Uwira said. “We’ve been very busy, and turned a profit quickly. What more can you ask for?”