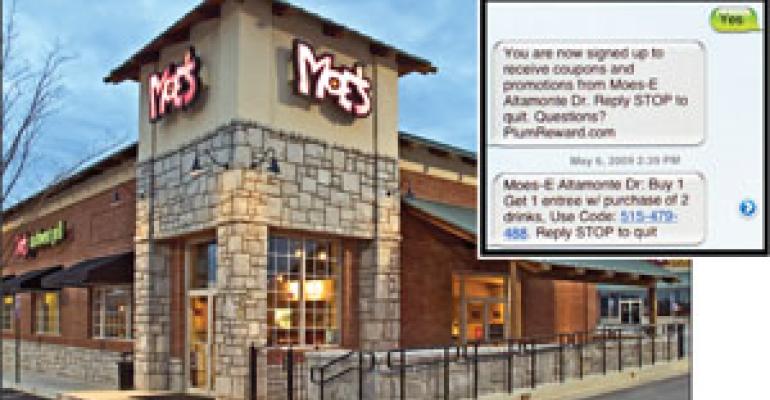 Moe’s Southwest Grill franchisee Neil Solomon was tired of being ripped off by customers redeeming counterfeit paper loyalty cards at his Altamonte Springs, Fla., outlet. So, in an effort to address the problem, he turned to a program built around text-messaging applications and handheld devices at the point of sale.

It was the right decision, the single-unit franchisee says.

Not only did it put an end to the counterfeiting problem, but it has also helped boost customer frequency.

Solomon is not the only operator who is distancing himself from paper. Others, like the 37-unit fast-casual Mexican chain California Tortilla of Rockville, Md., are deploying programs centered on magnetic-stripe cards used in much the same manner as electronic gift cards.

Focusing on loyalty initiatives in a down economy is a wise move, some researchers say. Forrester Research Inc., in its report, “Trends 2009: Customer Relationship Management,” wrote that given the “economic mayhem” it is clear “customer loyalty will trump customer acquisition.” It says a survey of 350 customer relationship management professionals found that 57 percent felt “improving customer loyalty” was a “top-five” priority.

Like many chains, Moe’s has long used paper loyalty cards that are punched by store employees when a customer makes a qualifying purchase. Once the required number of punches is made, holders redeem the cards for “Moe’s Money” certificates.

Last year, however, Solomon had had enough of customers trying to redeem cards stolen from his restaurant and perforated using special punchers acquired online. One person stole hundreds of cards and, until he was caught, sold them punched and ready for redemption on eBay.

With no chainwide electronic alternative to paper cards visible on the immediate horizon, Solomon invested in PlumReward from PlumReward LLC of Windermere, Fla. The system debuted in his unit last October.

To register, Solomon’s customers either send a text message to a number indicated in Moe’s marketing collateral or enter their cell phone numbers into a hand-held PlumReward device kept at the point of sale. They then respond affirmatively to a text message from the operator, inquiring whether they would like text-message versions of coupons and promotion information transmitted to their cell phones.

During each subsequent visit, Solomon’s patrons re-key their cell phone numbers into the device upon placing orders. The details of these orders are captured, and once diners have purchased 10 meals, text messages to this effect are sent to their phones. To redeem rewards, customers again input their cell phone numbers into the hand-held device, showing the result to an employee.

Solomon says the program now has 1,800 members, with about 300 more signing on each month. Of the 5 percent of customers who have earned rewards, 75 percent have redeemed them, he says.

“Our target customers, who are under 45, look at their e-mail far less regularly than they do their text messages, so choosing a program structured around e-mail would not have worked for us,” Solomon said.

He believes the system has eliminated fraudulent use of Moe’s loyalty program and says it hit its return-on-investment target within weeks of deployment by “significantly” increasing the frequency of guest visits. Anecdotal evidence also points to higher check averages among program participants, and he noted that “many casual customers have become regulars.”

Seven franchised Moe’s units owned by others in the Altamonte Springs area have begun testing PlumReward, he said.

Nixing redemption fraud was also a goal for Pam Felix, California Tortilla’s co-founder, when she selected an electronic loyalty platform 18 months ago. However, she had even greater interest in expanding the operation’s Burrito Elito loyalty program.

“We were using punch cards, which did not allow us to give program members points for buying anything other than burritos,” Felix said. “However, burrito-eaters represent only about 30 percent to 40 percent of our customers.”

To fully leverage the loyalty program, California Tortilla turned to logo-embossed, magnetic-stripe cards issued from Paytronix Systems Inc. of Waltham, Mass. To date, more than 200,000 of the plastic cards have been issued to the chain’s users, who either opted in to the program through e-mail or registered in a restaurant.

The Paytronix card technology interfaces with California Tortilla’s Micros Systems Inc. point-of-sale system. Data pertaining to members’ purchases are obtained at the counter, when cards are swiped through an integrated reader during the course of transactions. Program participants receive a printed tally of accrued Burrito Elito points at the end of each transaction. They earn one point toward “Burrito Bucks,” redeemable for all menu items for every dollar spent and an extra $5 in Burrito Bucks each time they rack up another 50 points.

Consumers also can track their points by logging on to a password-protected area of the operator’s website.

The loyalty card technology is hitting its return-on-investment goals, Felix said, adding that her chain is seeing about 5,000 new Burrito Elito registrants monthly. Check averages are running about 20 percent higher for Burrito Elito members compared with nonmembers, she says.

“This is a more expensive option than the punch cards, but there’s a great tradeoff in the information we’re able to get from the reports it produces,” she said. “For example, we can see what our Burrito Elito members order and tailor promotions to their preferences. We can save [diners’] preferences in the system and use them for suggestive selling. You just can’t put a price on that.”