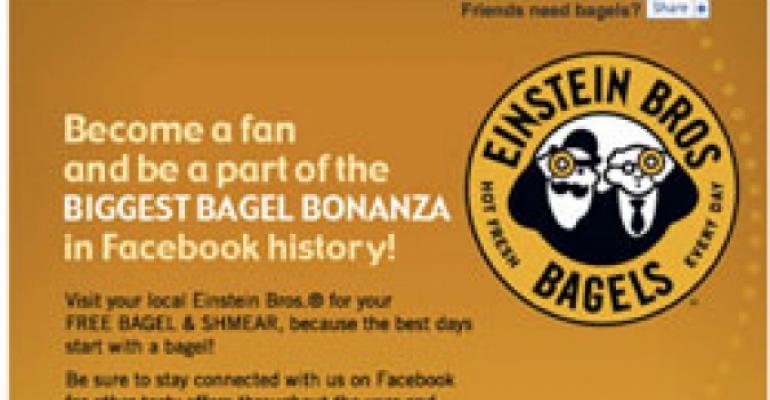 LAKEWOOD Colo. In the two and a half days since it began a bagel giveaway on Facebook.com, Einstein Bros. Bagels has increased its “fan” following at that social networking website by nearly 70 fold, potentially laying the groundwork for new-customer trial on a massive scale, officials said.

O’Reilly said all fans of Einstein Bros.’ Facebook page at www.facebook.com/einsteinbros have received a coupon for a free bagel and shmear, which usually sells for $2.49.

“Einstein Bros. bought advertising all across the Facebook network on every single status page,” O’Reilly said of the chain’s undisclosed investment in a so-called Facebook “roadblock” and targeted sidebar advertisements.

“We’ve been through our first wave of people fanning us across Facebook from our offer and what we’re expecting to see is continued growth as the message starts to go viral,” O’Reilly said.

Though it remains to be seen what kind of redemption rates will be associated with the Facebook-generated coupons, O’Reilly said Einstein Bros. sees the offer primarily as a inducer of trial visits from new customers, not a generator of traffic among existing patrons.

“I’m confident that when consumers come into our restaurant they will become key customers for life,” O’Reilly said.

Part of that confidence, he indicated, comes from the three to four months of planning for the Bagel Bonanza put in by Einstein Noah staffers, representatives of the chain’s ad agency for the project, Creative Alliance Inc., and Facebook employees. That planning included a strategy for staggering the “valid dates” printed on the coupons so that Einstein Bros. stores are not overwhelmed by demand, O’Reilly explained.

Product shortages plagued some giveaways last year, such as one staged by KFC to generate trial of its new grilled chicken.

“Facebook is a fantastic way for Einstein Bros. Bagels to build relationships with our core audience in the fun, playful tone of our brand personality by allowing us to have a two-way conversation with them,” O'Reilly said. He said it appears that the demographics of users of the social networking site are “a good match” with those of the chain’s users.

Einstein Bros. insiders are tweeting about the initiative to the chain’s Twitter.com followers, sending out such messages as “Free Bagel & Shmear? Become our fan on Facebook and get one! We're givers, that's what we do!”

“We’re making those kinds of decisions in real time,” he said. “In the social networking world and with the way this marketing environment works, we have the ability to do that.”

For the most recent quarter ended Dec. 29, Einstein Noah Restaurant Group reported a 1.8-percent decline in same-store sales at company-operated restaurants, about 80 percent of which are operated under the Einstein Bros. brand, compared with a 3.3-percent drop in the same 2008 period. The company also operates 76 Noah’s New York Bagels restaurants and one Manhattan Bagel store and franchises 69 Manhattan Bagel locations.