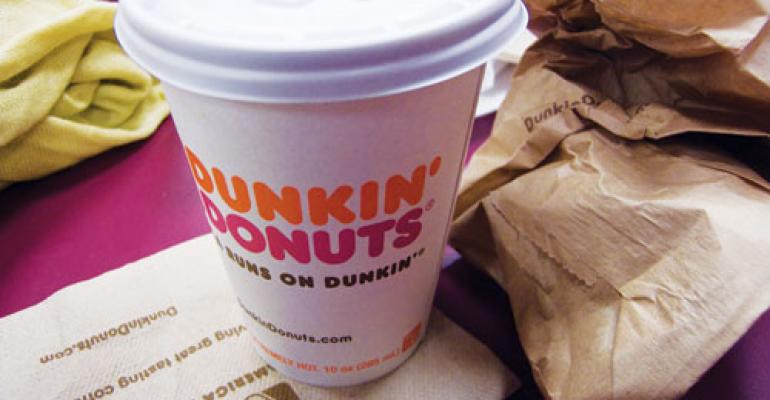 The report cited unnamed sources who Reuters said were “familiar with the situation,” and placed the IPO sometime in the second half of 2011.

Canton, Mass.-based Dunkin Brands said Friday in an e-mailed statement to Nation’s Restaurant News that the company does not “respond to rumors or speculation.”

“We are focused on operating our business and helping our franchisees drive revenues and profits at their restaurants,” the company said.

Speculation surrounding a Dunkin’ Brands IPO has run rampant ever since the company was purchased by a private-equity consortium in 2005 for about $2.4 billion. Current owners Bain Capital, The Carlyle Group and Thomas H. Lee Partners bought Dunkin’ from then-owners Pernod Ricard, which had purchased the company from Allied Domecq.

A typical time frame for most private-equity investments can run between three and five years, depending on expected returns and market dynamics. Bain Capital has been active in the restaurant space for years, snatching up companies through leveraged buyouts and garnering returns through initial public offerings of holdings and final divestitures. Investments have included Burger King and Domino’s Pizza. At Burger King, for example, Boston-based Bain Capital was one of three firms that acquired the quick-service company in 2002, then held an IPO for the Miami-based restaurant company in 2006, and finally cashed out with the BK sale to current owners 3G Capital in 2010.

Dunkin’ spent much of 2010 working through corporate initiatives that are often associated with companies looking to go public: re-establishing unit growth, building sales momentum and cleaning the balance sheet with a refinancing of debt and prepayment of certain balances. The company also hired a new chief financial officer, Neil Moses, who joined Dunkin’ last October from Parametric Technology Corp., a publicly traded technology firm with a market capitalization of about $2.7 billion.

Dunkin’ Brands owns the 9,760-unit Dunkin’ Donuts and the 6,433-unit Baskin Robbins, which together produce systemwide sales of $7.66 billion, according to the company’s latest financial report.