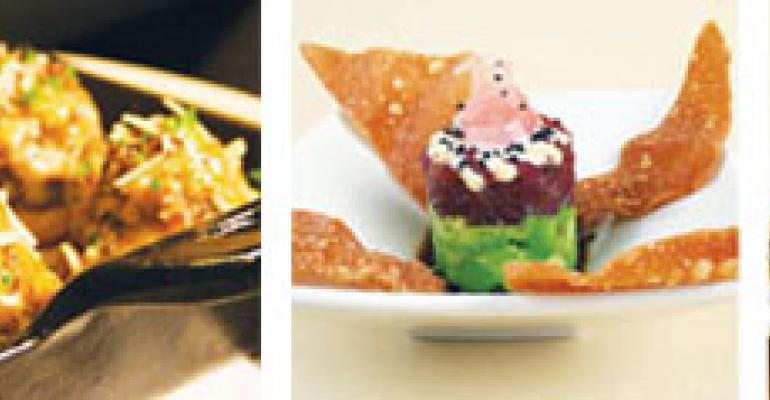 During what’s become a three-year segmentwide sales slump, casual-dining operators have tried just about everything to spur sales, from discounts and bundled meals to two-for-ones and freebies. To keep the lights on, many also have cut operational fat, muscle and, some would swear, even bone.

But if there’s an upside to the ongoing downturn, it’s that it’s now forcing casual operators to think longer-term, with many reconsidering and redefining their businesses. In short, many say they are switching from defense to offense with an eye toward positioning themselves to appeal to the post-recession customer.

Some casual operators are dangling premium cuts of beef and fish to tempt budget-diligent fine-dining customers. Others are rolling out numerous small plates whose lower price points are intended to lure back the customers who strayed to fast-casual and quick-service offerings as the economy disintegrated. Still others are pouring premium drinks and dishing out happy-hour and late-night food specials to build bar business. But while the strategies vary widely, the common theme is value.

“Consumers have basically made it known that going to a restaurant—especially a higher-priced restaurant—is a disposable luxury,” said Dennis Lombardi, vice president at DW Partners in Dublin, Ohio. “In the Great Recession, a lot of them said, ‘We’re not doing it,’ and it looks like operators have listened. We’ve seen a lot of change that’s bringing some of those customers back out, and we expect to see more.”

Chains such as Houlihan’s and the recently renamed Smokey Bones Bar & Fire Grill are focusing on their bar business by offering a mix of small plates menus, higher-quality adult beverages and later hours.

The Cheesecake Factory, known for large, shareable portions, joined the small plates fray last year and watched those smaller bites gobble up a 15-percent share of total appetizer sales. In late February, it rolled out an aggressively priced happy hour program that includes a 15-item bar menu and $5 specialty cocktails in its Orange County, Calif., restaurants. The program will spread to all 147 units in the chain by mid-March.

Amid a chainwide overhaul, Ruby Tuesday’s has headed in the opposite direction, adding premium steak and lobster dishes to the menu, along with a Sunday brunch. Believing better-heeled customers will eat out if the price is fair and the atmosphere inviting, the chain has traded in its neighborhood-casual reputation for a slightly more sophisticated feel, a finer-tuned menu and updated decor.

In February T.G.I. Friday’s took a similarly pricey stance when it introduced a limited-time offering of “premium indulgences,” including hearty Black Angus beef, large tiger shrimp and salmon. But that LTO doesn’t mean the bargains won’t continue at the chain, which reintroduced 2009’s “Three for $12.99” appetizer-entrée-dessert combo again this year.

No matter how you look at it, value is the name of the game, and, said Darren Tristano, executive vice president at Technomic in Chicago, operators are finally looking to move beyond price slashing traffic boosters and into programs that will better position their brands for recovery.

“Discounting has been like crack to restaurants; it drives sales but it doesn’t help margins,” he said. “It’s good to see these companies trying different things. If it’s small plates, customers appear to be willing to pay for them without feeling they’ve over-invested.… If it’s keeping the bar open later, then they increase their chances of attracting younger customers.”

As the recession dampened sales at Avalon in Louisville, Ky., owner Steve Clements decided his restaurant’s days as an upscale brasserie were over. Known for its sophisticated cuisine and urban-hip vibe, Avalon’s changes had to begin with the menu if it would survive.

“We were serving a foie gras and scrambled duck eggs appetizer for $16, and I knew that had to go,” said Clements, who turned the restaurant into a more casual spot in 2009. “So we started adding more sandwiches, great flat-bread pizzas, better salads.”

In his travels, Clements saw many tapas restaurants opening around the country, which led him to devote a portion of his menu to small plates. The changes have helped tremendously, he says, providing “more people a lot more choice as to how they want to use our restaurant.

Not surprisingly, we’re getting a wider variety of customers, too.”

With just one unit, Avalon serves as a micro-case study of the changes afoot in the casual segment: restaurants offering varied menus including wide-ranging price points—much like the barbell strategy employed in quick service. It’s working at Avalon and at The Cheesecake Factory, too.

“Like everybody else, we knew we needed to react to the economy, but we wanted to do something different,” said Bob Okura, vice president of culinary development for the Calabasas, Calif.-based chain. “So instead of discounting or bundling offers, we put on our thinking caps and added more creativity and attractive price points in the process. That’s how we created our small-plates menu.”

When he studied offerings at more traditional tapas restaurants, Okura found prices ranged from $6 to $14, costs he deemed too high. Cheesecake’s small plates cost nearly half that, and last year alone, its 147 outlets sold 4.4 million of them.

At Houlihan’s in Leawood, Kan., its small plate menu reads, “A little of this. A little of that. Taste around the menu without commitment or order-envy,” implying the fun and relaxed mood it wants in its bars. The new effort is solidly targeted toward “Millennials” aged 20 to 30, said Jen Gulvik, vice president of marketing for the 100-unit chain.

“They’re very social, they tend to eat in groups, eat at nontraditional times and graze,” Gulvik said. “We wanted to position ourselves for future relevancy and appeal to this consumer segment.”

Houlihan’s small-plates lineup is extensive and varied with about 40 items. Prices range from $2 to $10. Nearly all its items are newly created dishes rather than downsized items from the main menu.

California Pizza Kitchen’s new Small Cravings menu is more narrowly priced at $4 to $7, and more limited in scope, coming in at seven items. CPK also introduced a Wine Cravings menu that includes half glasses of wine.

Gulvik noted that smaller portions also address the desires of health-conscious consumers, such as Baby Boomers. That’s something Applebee’s is trying to do with its new Unbelievably Great Tasting & Under 550 Calories menu. Full entrées such as Grilled Shrimp and Island Rice and Grilled Dijon Chicken and Portobellos range in price from $10.99 to $16.99.

“We’re taking another look at everything we do,” Mike Archer, president of Applebee’s, told Nation’s Restaurant News in December. “We’re contemporizing it so we can stay in step with our guests and their tastes.… Great restaurants always reinvent themselves. It’s not revolution, but evolution.”

Not surprisingly, many chains remain tight-lipped about their strategies, unwilling to discuss the early phases of these experiments. Ruby Tuesday’s declined an interview, but the company’s founder, Sandy Beall, has spoken to nontrade media about its repositioning, saying sales are headed up since the company’s overhaul began.

In published reports, Beall said the rebranding and reimaging campaign was painful, and that spending about $100 million modernizing company stores in the middle of a recession garnered no love from Wall Street. But in its fiscal year second quarter, which ended in December, there was solid proof the changes may have affected a turnaround. Guest counts increased nearly 2 percent in the period, and the company reported $431,000 in net income, versus a loss of $37 million the year before.

It was “important to differentiate our brand,” Beall said in a television interview with Fox News. “We needed to break out of that bar-and-grill pack and align ourselves more with what I call high-quality casual dining: the Outbacks and Olive Gardens of the world.”

As made clear in the company’s new slogan, “Fresh taste. Fresh Place,” pricey dishes by Ruby Tuesday’s standard, such as steak and lobster, signal the chain is raising the bar in order to attract a wider demographic, specifically diners with more money. Beall said he hopes to move per-person ticket averages up $2 to around $14.50 by courting those who used to frequent upscale spots, but are now more protective of their discretionary dollars.

Charlie Brown’s Steakhouse is targeting this same market using a strategy that allows guests to customize combination platters made from meats, seafood and sides.

“We got such a great response to that program that we’ve put Build Your Own Combo into our core menu,” said Sam Borgese, president and chief executive of CB Holding Corp., parent of the Charlie Brown’s and Bugaboo Creek Steak House chains. The Mountainside, N.J.-based chain also added a small plates menu, but it’s not been a strong seller. “We have placed a lot of marketing effort into them, and our guests are enjoying them, but there’s not been a strong rush to it. Not like the combos.”

“I don’t have a problem selling a small plate with a 55-percent food cost if it entices someone to buy a margarita with a great profit margin,” Lombardi said. “And that’s what I’m seeing. Overall, this will work for younger generations who want great deals on appetizers, not complimentary bar snacks.”

Following the remodeling of 10 Smokey Bones units, Ian Baines, president and CEO of the 68-unit Orlando, Fla.-based chain, told NRN in January that sales are trending upward with the help of extended bar areas and hours. Baines called the result “a whole new daypart that we haven’t had in the past.”

Lombardi sees the success of such remodeling as significant, saying many casual restaurants could benefit from updated bar layouts.

“Millennials especially want an environment that’s social and allows them to mix and mingle, but a lot of bars aren’t configured well for that,” he said. “If the bar is linear, they can’t see what’s going on with everyone,” he added, saying semicircular layouts work much better.

Houlihan’s has gone one step further to encourage socializing and sales by making its bar drinks shareable.

“No, no giant margaritas with four straws,” Gulvik said, laughing. “We’ve added communal beverages like sangria served in pitchers and large format artisan beers in 750 milliliter bottles.… Both of those were definitely done with Millennials in mind.”