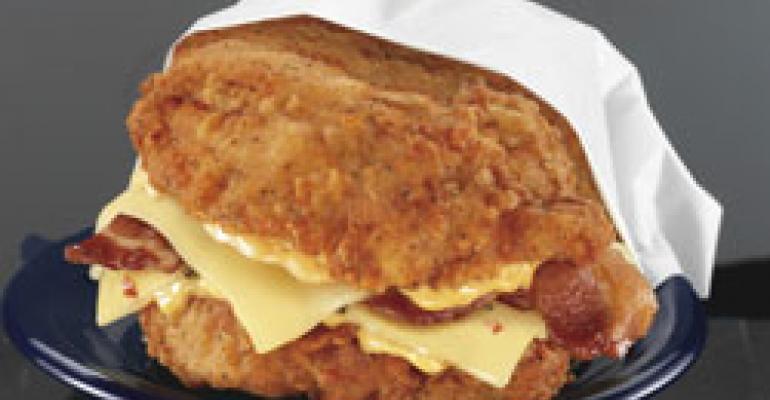 The downside of KFC's Double Down

LOUISVILLE, Ky. It’s too early to tell whether KFC’s roll of the dice with a meat-as-bread sandwich like the Double Down pays off in sales, but early findings from one marketing research firm suggest that advertising for the product may be weakening the brand’s perception among consumers.

Data from New York-based BrandIndex, which compiles consumer perception scores relating to hundreds of brands across several industries in the United States, revealed KFC may be giving back some gains from the positive buzz associated with last year’s launch of Kentucky Grilled Chicken.

But KFC officials said they were pleased with the splash the Double Down has made, especially with the target young-male demographic, and would closely monitor how the product’s traditional- and social-media attention translates to sales.

Despite increased awareness for the brand during the Double Down’s ad campaign, KFC’s "buzz score," which BrandIndex compiles from 5,000 daily consumer surveys by subtracting negative feedback from positive feedback, has declined steadily in the lead-up to the product’s debut. Among consumers 18 to 49 years old, KFC's buzz score fell from 21.1 in mid-March to 11.5 on April 16, just days after its introduction, BrandIndex said.

Around April 2, as KFC had a countdown on its website in anticipation of the April 12 launch, levels of attention and awareness for the brand among consumers started rising, and its buzz score kept decreasing slightly, said Ted Marzilli, senior vice president for BrandIndex.

"But the attention increases were nowhere near the magnitude of the levels around last year’s grilled-chicken launch," Marzilli said. "I wouldn’t call the campaign unsuccessful at this point; that depends on sales over the next few weeks or so."

KFC launched its Kentucky Grilled Chicken last April and had three "UNFry Day" giveaways in 2009, including one tied to a mention on "The Oprah Winfrey Show" that was hampered by operational gaffes and supply issues. Despite some negative publicity from that giveaway, KFC enjoyed its highest buzz scores, fluctuating between 24 and 29 for most of the summer and scoring higher than quick-service industry averages for buzz scores, BrandIndex data showed.

Word-of-mouth for the Double Down began building as early as last summer when it was being tested in Providence, R.I., and Omaha, Neb., said Rick Maynard, KFC’s spokesman.

"For the demographic it is intended for, primarily young males, [the Double Down] has received an unprecedented response following launch," Maynard said. "We’ve never seen so many people post YouTube videos and social-media reviews of one of our products."

The attention spread to the media as well, he pointed out. "This is the first time in our history that we received calls from the media before we sent out a press release," Maynard said.

Marzilli hinted that perhaps the downward movement in buzz scores corresponding with increased awareness of the Double Down results from the item being a departure from the quick-service segment’s most recent slate of higher-perceived-value items.

"Over the last 12 to 18 months, quick service has had a really good run," Marzilli said. "[Quick-service brands] have been improving their perceptions along quality, value and satisfaction. With a launch like the Double Down, which is so in-your-face and unhealthy, it might serve to remind people about issues they’ve had with QSR all along, so this could be a little risky.

"It could also be that KFC is tapping into this pent-up demand from people being told to eat healthy for so long, as an alternative and a way to say, ‘Indulge yourself.’ So this is high-risk, with a high potential for reward. Whether it has a lasting impact, I don’t know yet, but it could remind people of what they historically haven’t liked about QSR."

KFC touts the product’s novelty as a strength on which it can build.

"As you might expect, our post-test market research shows the product received very high scores for uniqueness," Maynard said. "Clearly, the product performed so well in test market that the Double Down is now being promoted nationally. Our consumer insights team will evaluate every element of the campaign once it concludes, but for now, the product is the talk of the country, and it is being very well received in our restaurants."