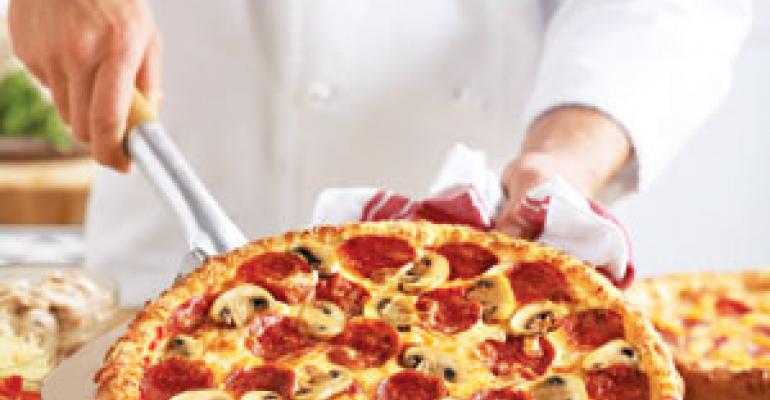 Domino’s Pizza Inc. chief executive Patrick Doyle called 2010 a “banner year” for the pizza delivery operation, and said he is just as excited for 2011, when the company will look to grow sales in the United States and sustain rapid expansion internationally.

After two years of negative store growth in the United States, Domino’s ended 2010 with a net gain of two domestic units, reflecting the closure of 12 corporate stores and the opening of 14 franchised locations. The chain also had what Doyle called “our biggest year ever in international,” opening 350 locations abroad in 2010. It currently operates or franchises 9,351 units worldwide, making it the largest pizza quick-service operation.

Doyle credited better store-level profitability for the positive trends in store growth, and said higher average-unit volumes would help Domino’s reach its long-term goal of opening between 250 and 300 locations over the next several years, the vast majority of them coming in international markets. Domino’s also is projecting same-store sales increases between 1 percent and 3 percent in the United States and between 3 percent and 5 percent internationally over the next few years.

The management team at Ann Arbor, Mich.-based Domino’s spoke with analysts and investors Tuesday to detail future plans after they posted fourth-quarter results.

Domino’s officials said that little of its worldwide unit growth over the next few years would come in the United States, so most of the focus of the company and its domestic franchisees would be directed at sustaining comparable-sales growth. Doyle noted that won’t be easy, especially with comparisons to a record 2010.

The chain likely will post negative same-store sales in the current first quarter as it laps a 14.3-percent gain from the first quarter of 2010, which was the first full quarter of consumer response to Domino’s reformulated pizza and the accompanying “Pizza Turnaround” marketing campaign.

“We’re very proud to have posted a number like last year’s Q1, and what’s more relevant is that our average unit volumes are now at a significantly higher level than they were before 2010,” he said. “We’re operating off a much higher base of sales to grow, so … look at the overall sales volume and profitability of the business.”

Leveraging technology like online ordering would be “pivotal” to maintaining traffic growth key to Domino’s performance in 2011 and beyond, Doyle said. In late 2010, the brand brought all its online-ordering and e-commerce back-office operations in house.

“We can now be more agile with that development going forward,” he said. “We’ve exceeded $1 billion cumulatively in online orders in the U.S. since we launched that platform in 2008, and 25 percent of our sales now come through online channels in the U.S.”

Globally, Domino’s rang up $1.3 billion in sales through e-commerce alone, he added, and the chain hopes to import from its Asian markets like Japan and South Korea more mobile-ordering capabilities as a way to grow that functionality. Online orders tend to have higher average checks and more add-ons like drinks and desserts, chief financial officer Michael Lawton added.

The brand announced last week that traditional and boneless chicken wings would be an item promoted heavily this year to build incremental sales.

“We can increase the average ticket by selling chicken to our existing customers,” Doyle said. “Of the long list of wonderful things about 2010, one of the key things was the fact that the news of the new pizza really carried us the entire year [in our marketing], which allowed us to build up a pipeline of new products.”

Doyle admitted that the cost of good would rise in 2011. While gasoline prices, which have been trending higher in recent weeks due in part to tumult in the Middle East, won’t have much negative impact on store-level P&L statements, they would result in driving commodity costs higher, he said.

Doyle and Lawton said Domino’s is projecting an increase in the price of its commodities basket of between 3 percent and 4 percent for 2011, which would yield about a 1-percent hit to the system’s food cost.

“To keep margins consistent, you’d have to find a pure price increase of about one point to offset that kind of a number,” Doyle said. “So we’re looking at all sorts of things, whether its ways to be smarter with the coupons out there, or price increases that can be taken. We’re starting to see some folks in QSR taking a little bit of price, and that’s something we’ll look at as well, but consumers still want value. We want to provide them with the right value.”

Domino’s further demonstrated the importance of its overseas business to future growth last week by announcing that it has hired Richard Allison, the former leader of Bain & Company’s restaurant practice, as executive vice president of international.

Lawton said during the call that Domino’s infrastructure would allow for the opening of hundreds of international stores over the next few years.

“When you’re getting 350 net international units up in a year, you’re adding some overhead, but we continue to get leverage on that overhead as we continue to grow,” he said. “We had a pretty extraordinary year last year, and that was all straight organic growth.”

The chain officials noted encouraging sales trends from some of its largest international franchisees, including an 11.9-percent gain in same-store sales for Domino’s in the United Kingdom and Ireland for 2010. That franchise system derives the majority of its sales from online ordering.

All of Ann Arbor, Mich.-based Domino’s restaurants in international markets are franchised. Of the brand’s 4,929 units in the United States, 454 were company-owned.