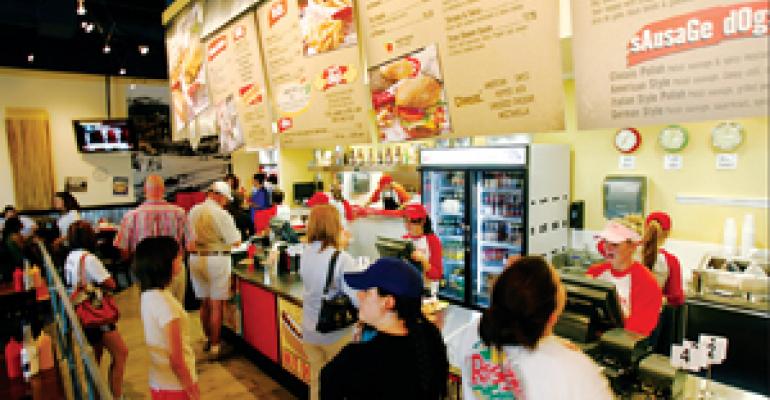 Discriminating diners are going to the dogs for upscale franks

The dog days of summer are nurturing a growing number of gourmet frankfurter concepts.

With names like Coney Beach and Marty D’s Deluxe Dogs and Desserts, these more upscale hot dog purveyors are capitalizing on a foodstuff already promoted by such established players as the Galardi Group’s 350-unit Wienerschnitzel chain out of Newport Beach, Calif., the 300-unit Nathan’s Famous chain based in Westbury, N.Y., and such regional players as the Portillo Restaurant Group’s 30-unit Portillo’s Hot Dogs of Chicago and the 22-unit James Coney Island chain in the Houston area.

Given rising food, real estate and labor costs, gourmet hot dog concepts have favorable unit economics and a strong appeal to busy, cost-conscious families. Further, the need for marketing is minimal, operators claim, as most Americans know what a hot dog is.

Marty D’s, created by movie producer and director Marty Davidson, is scheduled to open by year’s end in Beverly Hills, Calif. Its signature gourmet dog is expected to carry a $7.95 price tag.

Steve Ballas opened Steve’s Snappin’ Dogs in February 2006 in Denver. Since then, he said he has built a strong regional following for such geography-theme frankfurters as the Dallas Dog, featuring chili con carne and Cheddar-Jack cheese for $3.55, and the Denver “Burrito” Dog, sporting chili con carne, Cheddar-Jack cheese, jalapeños, sliced bacon, sliced tomato and romaine lettuce in a flour tortilla for $3.95.

Ballas said he sells about 3,000 dogs in an average week from his converted gas-station site, which seats 20 inside and 50 on the patio.

“People are going back to their childhood when they eat these all-natural dogs,” Ballas said. “It brings back their dreams of hot dogs.

“In addition to the hot dogs, we also offer burgers, cheese steaks and a full vegetarian menu, because a lot of families have both vegetarians and carnivores. We have people who drive from the mountains, more than an hour and a half away.”

Rutkauskas believes operators would appreciate the startup cost of $350,000 per unit for Coney Beach. Paper costs run about 2 percent of sales.

“We’re stamping brown paper bags with our logo on it,” he said.

Coney Beach also offers 25 to 30 varieties of beer for adults. The average per-person check in the first week was about $13. Hot dogs are outselling hamburgers two-to-one, he added, and the entire menu is à la carte, with no combination meals.

The hot dog, he noted, doesn’t need a lot of marketing.

“I saw an opportunity to do something better. A lot of cities have their local hot dog place. I want to improve the product, offer better delivery, such as quicker and less hassle, a better atmosphere and better service.”

Rutkauskas noted that even with gourmet burgers and loaded fries, the Coney Beach menu remains simple.

Ticket times at Coney Beach are under six minutes and table turns occur every 15 to 20 minutes.

“We have sophisticated pagers with our logo and the tagline, ‘Sit. Stay. Good Dog,’” he said. “Families really, really love it.… Kids love hot dogs, and mac and cheese, and pudding, and peanut butter and jelly, and corn dogs. Kids really drive the families where they will eat. If you have happy kids, you have a happy mom and dad.”

Twenty-unit Jody Maroni’s Sausage Kingdom in Venice, Calif., has teamed with Trifecta Management Group Inc. of Agoura Hills, Calif., to oversee the construction and later the management of the newest Jody Maroni’s in the Gilroy Premium Outlet Mall in Northern California, which is scheduled to open this fall.

“We are very fortunate to be working with Trifecta as we enter our newest phase of development,” said Jordan Monkarsh, president of Jody Maroni’s. “We are looking to add a number of company stores over the next few years and feel that Trifecta can only aid us in our expansion.”

Jody Maroni’s said it plans to open company-owned restaurants in Houston and Cincinnati as well as in New Jersey and other parts of Northern California.

In Los Angeles, which is known for such legendary hot dog eateries as 68-year-old Pink’s, newcomers also are carving out their niche.

Davidson, who wrote and directed such films as “The Lords of Flatbush,” said his 50- to 60-seat hot dog restaurant, Marty D’s, will open south of Wilshire on Beverly Drive.

His wife of 39 years, Sandy Davidson, who designed The Foundry on Melrose and other restaurants in the Los Angeles area, is crafting Marty D’s.

“I grew up in Brooklyn and always loved the hot dogs I got there,” Marty Davidson said.

He said that an annual July Fourth gathering at their home grew into the Marty D’s concept after friends convinced them to open such a restaurant. Davidson said he is importing hot dogs from New York.

“We’re selling an 8-inch hot dog on a special onion roll,” Davidson said. “That’s a third of a pound of meat. The audience we are trying to reach is demanding. This is fast food for the discriminating taste.”

The colors and architecture of Nantucket, Mass., will inspire the decor, Davidson said. The dish-ware will be upscale, he added.

The menu also will include Americana desserts like cobblers and hot fudge sundaes, but hot dogs have broad appeal, he said.

“They are so easy to eat,” Davidson said. “You can be hungry or not hungry. They go along with everything that’s American, from July Fourth to baseball. We grew up with certain things, and the two most important things are ice cream and hot dogs. They are hard to give up, because they are so much a part of our youth, our history. It’s the most American meal we have.”

The market for hot dogs is large. The National Hot Dog and Sausage Council in Washington, D.C., said that in 2006 more than 730 million packages of hot dogs were sold at retail stores, not including Wal-Mart, which does not report sales data. That number represents more than $1.5 billion in retail sales. The council said sales are growing at airport outlets, restaurants and ballparks.

The council noted that consumption varies by region. According to sales data for 2006, New York City spent $101 million on hot dogs in retail stores, more than any other market in the country. Residents of Los Angeles came in second, with $78 million spent on hot dogs, and the combined Baltimore/Washington, D.C., area spent more than $46 million on hot dogs.