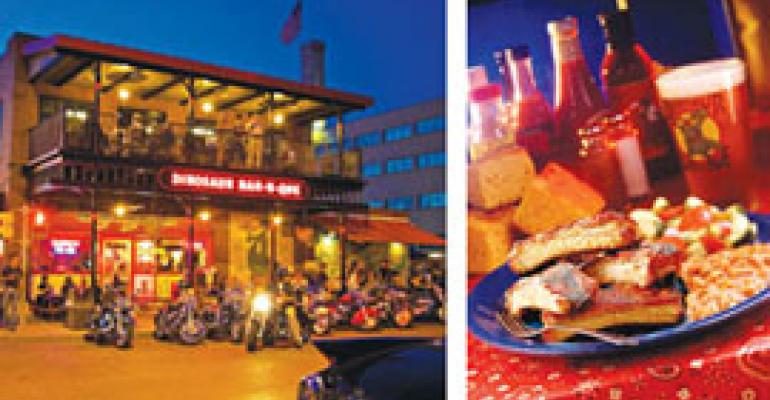 Dinosaur Bar-B-Que: Upstate N.Y. chain aims to grow beyond cult status—but moving at its own pace

Dinosaurs will walk the earth again, if John Stage has anything to do with it.

On the other hand, the founder, president and chief executive of the upstate New York cult-classic Dinosaur Bar-B-Que is not looking for them to break into a run, either.

With three restaurants open and a fourth in development, Stage, a biker who got his start slinging barbecue at motorcycle rallies, says he’s not gearing up for rapid expansion of his concept anytime soon.

“You have to be smart about it,” Stage said. “The landscape is littered with people who tried to grow too fast.”

And that’s somewhat ironic, too. While many restaurateurs are going begging on the street for expansion capital, some would say Stage is cruising down easy street. His partner in Dinosaur Bar-B-Que is Soros Strategic Partners LP, a private investment firm founded by billionaire financier George Soros. In 2008 Soros’ firm purchased a 70-percent stake from Stage’s former partners for an undisclosed sum. Soros also owns the seven-unit Mastro’s Steakhouse chain in Arizona.

But his deep-pocketed partner notwithstanding, Stage says he’s not planning to speed up growth just yet. “They’re great partners. They’re letting me go at my own pace,” he said.

Industry observers point out, in fact, that barbecue can be a difficult concept to chain. “Barbecue is really a niche opportunity,” said Ron Paul, president of Technomic Inc. “Is it a menu item or a concept? Does the American public need a place for just ribs when you can get baby-back ribs at Chili’s? It’s a self-limiting category, and we’ve seen that it’s tough to create a national chain.”

But Stage doesn’t appear to be in any particular rush to prove the point one way or the other. While the “cue” specialist is keeping its eyes open for potential sites, its energy is focused on the fourth location. Situated in downtown Troy, N.Y., overlooking the Hudson River, the new outlet will open in September, joining the other three locations in Syracuse, Rochester and New York’s Harlem.

The property, which previously housed a restaurant called Fresno’s, encompasses 9,200 square feet of space and seats about 250. Much like its three predecessors, it will resemble a rough-edged Texas barbecue joint, said Ray Trotta, business segment leader for Rochester, N.Y.-based Bergmann Associates, the property’s architect of record. Even the parking lot will be made to recreate the feel of gravel.

“It’s kind of like a biker bar that everyone can feel relaxed in,” Trotta joked.

Dinosaur’s 2,400-square-foot kitchen will contain four wood smokers, which will be vented outside through stacks that are visible from the street. The building also will feature a series of gabled roofs, giving the impression that it is actually several structures. Inside, guests will have the option of dining with other guests at communal tables that seat about 15.

In the warmer months, guests will be able to dine outdoors along the Hudson River. The restaurant also will house a private party room.

The menu for the new unit will feature much the same fare as the other Dinosaurs. “The basics are locked in, although there will be some geographical nuances and seasonal sides,” Stage said.

Pork ribs are the best-selling item, followed by brisket and pulled pork. The average per-person check runs $12 to $14 at lunch and in the mid-$20s at dinner.

While aficionados can debate endlessly the merits of various types of barbecue, Stage said he doesn’t specialize in a particular style. “We smoke and cook the meat in the traditional Southern manner,” he said. “We do our own thing.”

Stage said he honed his craft in the 1980s while traveling around with friends on their Harleys, hauling a cooker behind them and hawking barbecue at motorcycle rallies along the East Coast. Tired of life on the road, though, he and former partners, Larry and Nancy Luckwaldt, opened Dinosaur Bar-B-Que in Syracuse in 1988.

And while measured expansion is certainly in the cards, Stage refuses to be nailed down to a time table. When questioned about where he sees the chain in five years, he pauses, and then replies, “Ask me that question again in five years.”—[email protected]