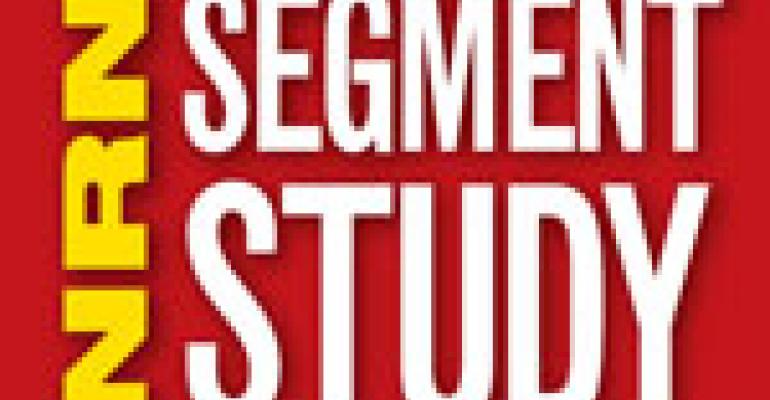 They say what goes around, comes around, and casual-dining chains are working to make that true.

After years of losing customer traffic to less expensive quick-service and fast-casual competitors, many of whom stole consumers by unveiling more casual-dining-like options in the race for food dollars, casual dinnerhouses are now deploying multiple quick-service strategies as they aim to win diners back.

From online ordering and delivery to curbside carryout, drive-thrus and a proliferation of kids’ meals, casual-dining chains are offering the increased speed of service, convenience and value propositions whose absence in the segment once cost them market share.

Quaker Steak & Lube has raised the convenience bar by building drive-thrus into all 34 of its units. Playfully named “Wingo Windows” in an acknowledgement of its fried-wings tradition, the chain has dedicated staff to answer phones, assemble pick-up orders and service customers at the window.

“In an economy like this one, you especially have to make sure customer service is top-notch,” said Marla Pieton, senior director of marketing for the Sharon, Pa.-based casual-dining chain. “You can’t have people waiting at the window when it’s supposed to be quick.”

Meanwhile, Boston Pizza International offers delivery at most of its 424 units in Canada and the United States. Despite the pizza emphasis in its name, the chain serves ample amounts of ribs, pasta and seafood choices that it wheels to customers’ homes and offices.

“Over the next year, we’re going to roll out delivery at every store,” says Steve Johnstone, chief information officer for the Vancouver, British Columbia-based company.

After Boston Pizza added online ordering a year ago, the number of carryout and delivery orders placed over the phone shrank to about 30 percent of off-premise transactions, Johnstone said.

He adds that a noticeable increase in off-site sales has the company “developing a major focus on [online ordering and carryout] going forward.”

“It’s a reaction to competition,” he says, “and it’s a revenue stream we don’t want to miss out on.”

Like quick-service players using online ordering, Boston Pizza’s computer platform upsells to Web users and boosts check averages. Johnstone would not disclose what the chain has spent on its system, but he says that despite the sizeable sum, it’s not only been worth the cost, but that online check averages are higher than those generated on the phone.

“From my point of view, it’s not a huge investment when you look at the fact that there’s a great business case for it,” he says. “When you look just at the additional incremental orders generated and how that pays for the system, how it improves guest service and helps the bottom line, it justifies itself very quickly.”

Uno Chicago Grill offers online ordering at nearly all of its 200 casual-dining units, and sales in that channel are flowing steadily. Rick Hendrie, senior vice president of marketing for the Boston-based chain, said about half of Uno’s carryout customers—delivery is offered in just a few of its markets—still use the phone, “and likely always will since we’re still a phone-centric society.”

But where Uno’s Web-ordering system is most helpful is with group order capabilities, Hendrie says. That feature collects and organizes orders from multiple customers into one transaction and manages each individual’s payments as well.

“This feature gets used much more at lunch when people are at work, rather than at night, when it’s single families,” he says.

Once carryout customers arrive, they use designated parking spots monitored by video cameras and serviced by staff, he says.

“Since the recession, curbside sales have really held their own, as opposed to other parts of the business where it’s been a little softer,” Hendrie says.

The Frandeli Group, owner of the 20-unit Spaghetti Warehouse chain, is applying some lessons learned in its quick-service Papa John’s Pizza stores to speed service in its casual-dining pasta houses.

“We know convenience is No. 1 right now with customers, and we’ve learned with our Papa John’s stores that placing orders online instead of the phone is the way to go,” says Azam Malik, president of Spaghetti Warehouse Restaurants Inc. and chief operating officer of The Frandeli Group.

The online ordering system, now in test at a handful of Spaghetti Warehouses, is fully integrated with the chain’s point-of-sale system. At the Irving, Texas-based chain’s new prototype store, a designated customer pickup area will be built just beyond the front door to allow customers to “see immediately where they need to go,” Malik says. “We’ll also have personnel assigned to take care of them. It must be easy and it must be fast if they’re going to use it.”

Even smaller casual-dining companies are plugging into the Internet. Baja Sol Tortilla Grill, which has six units in and around Inver Grove Heights, Minn., is using its website to drive e-mail marketing campaigns to customers. Co-owner and president Bridget Sutton says that since her marketing budget can’t match those of large competitors’ in any dining segment, the combination of social media, Baja Sol’s website and e-mail have become essential in keeping top-of-mind awareness with customers.

“We send them weekly e-mail reminders at about 4 p.m. in the afternoon with a simple message like, ‘Have plans for dinner?’” Sutton says.

As a result, she says, carryout has grown steadily, now accounting for about 17 percent of orders.

“Since a large part of our base is families, we really push them to order ahead and use curbside carryout,” she says. “I know from my own experience that taking four kids to a restaurant is a project.”

Though Atlanta-based Hooters is preparing to unveil its online-ordering site for the Super Bowl in 2010, the company says the tool is geared mainly for large group orders of items such as chicken wings rather than customer convenience.

Marketing vice president Mike McNeil says only 8 percent of Hooters’ business is carryout, which attests to its customers’ desire for “the Hooters experience.”

“Since a major part of our appeal for our customers is being in the restaurant, I don’t think you’ll ever see 20-percent to-go orders here,” he says. “The Web will mostly be a revenue creator for us and a marketing tool.”

He notes that Hooters’ sales fared so well through 2008 and the first quarter of 2009, the company thought the recession might not harm it—until June, when sales dropped noticeably. The drop sent the 460-unit casual-dining chain to work creating value offers it hopes will buoy sales.

With the kickoff of football season, Hooters launched a few limited-time appetizer and/or sandwich combo offers priced from $4.99 to $8.99. On Wednesdays, known in stores as “Wingsdays,” customers can get 10 boneless wings and fries for $5.99, a $3 discount on the regular price.

“The Wingsday deal is still only a 30-percent food cost for us, so you can’t call it a loss leader at all,” McNeil says. “We’re very proud to say that we’ve not increased prices in three years, and now, more than ever, these are the kinds of deals our core customers really need.”

Much like their quick-service foes, many casual concepts are turning to deals hovering near $5. During September, T.G.I. Friday’s ran a “Take $5” bargain giving customers the option of buying burgers and chicken sandwiches for $5, or choosing a $5 discount on select entrées. The offer ended Sept. 30, and the company declined to discuss its affect on sales.

In the same month, Friday’s increased its foothold in grocers’ freezer cases by adding a line of frozen skillet meals for home consumption.

Leading up to the 2008 opening of Hannah Bananas, a single-unit casual restaurant in the touristy Pocono Mountain town of Effort, Pa., Willi Nebel observed how quick-service players constantly changed specials and deals to capture customer interest. So despite some $14 items on his menu, Nebel regularly advertises $5.95 specials that “draw one or two customers for the deal, but somebody else always seems to order the more expensive shrimp scampi.”

Despite his transient customer base, Nebel insists online ordering is a major reason he’s outpacing his longer-established competitors’ sales.

“It’s given me an edge to inexpensively market my restaurant.” Nebel says. “If I’d have relied on traditional print media to get the word out, it would have been tough to survive this” recession.

Much like Nebel, Beef ‘O’ Brady’s applies a classic barbell strategy when pricing its menu, says Julie Thomas, vice president of marketing for the Tampa, Fla.-based chain. Customers needing a price break can buy less expensive items, while others able to spend more can if they choose. This fall the chain launched a “Feed Four for $20” deal that includes four quarter-pound burgers, eight chicken tenders, and a family-size order of fries and coleslaw.

“We know we’re not losing customers, but we are losing visits,” Thomas says. “We see this as a chance to get them back into the restaurant, but without discounting our core products.”

Quaker Steak hasn’t done much price cutting, Pieton says. Rather, it’s putting energy behind special promotions to add entertainment value to “the Lube experience,” Pieton says. “In the casual segment, this is how we differentiate ourselves.”

Following its tagline of “Something’s always happening at The Lube,” it launched a Wednesday Bike Night to kick start midweek sales. At lunches, it’s now offering a $4.99 “Price Brake” menu that includes some penny-pinching options.

But even if low prices spur sales now, is there a risk of cheapening the image of a casual-dining concept better known for entrées in the $10 to $15 range? Not necessarily, says Dennis Lombardi, a consultant and industry analyst with DW Partners in Dublin, Ohio.

“There’s always that risk, but I haven’t seen too many go so far down in price that customers would perceive it as a change in the concept; they just see it as a good deal,” he says. “You’d have to make a lot of wholesale changes to your menu and price structure before people began to wonder.”

Casual players are also readjusting their focus on kids—a demographic to which quick-service players have long catered—with new menu options and low prices designed to sway the dining votes of small patrons.

P.F. Chang’s China Bistro recently made its kid offerings more healthful and adult-like with dishes like its Baby Buddha’s Feast, a mix of steamed or stir-fried veggies, lo mein or egg noodles and stir-fried chicken.

Texas Roadhouse now has a Roadhouse Ranger Club for kids, whose menu features a blend of miniaturized adult offerings, such as a 6-ounce sirloin steak, rib basket and mini sirloin burgers, along with de rigueur macaroni and cheese and chicken finger choices. With the recession drying up discretionary dining dollars and eating-out occasions, Kent Taylor, the chain’s chairman, says some emphasis on children’s options was necessary “to get the whole family eating here.”

When Beef O’ Brady’s started some 20 years ago, it came out with a $2.99 kids’ menu whose price hasn’t risen since. That certainly won’t change anytime soon, Thomas says.

“You see so many people jumping on the value bandwagon and saying ‘kids eat free,’ but we’ve been close to that for a long time,” she says.

It appears no one other than Quaker Steak is saying “parents eat free.” To further leverage the kid vote, the chain began a limited market test of a menu from which one parent can choose a free entrée if their child chooses an entrée from its kids’ menu.

“If a child orders from our Tweener menu or Lube Cruiser menu, a parent can get a free order from a different six-item menu,” says Pieton, adding that the campaign began Oct. 5 and is good on Mondays only from 4 p.m. to 9 p.m. The offer ends Oct. 26.

“Right now it’s too early to tell how successful this is going to be, but we know it’s generated a lot of attention,” she says. “Who else is saying ‘parents eat free’?”