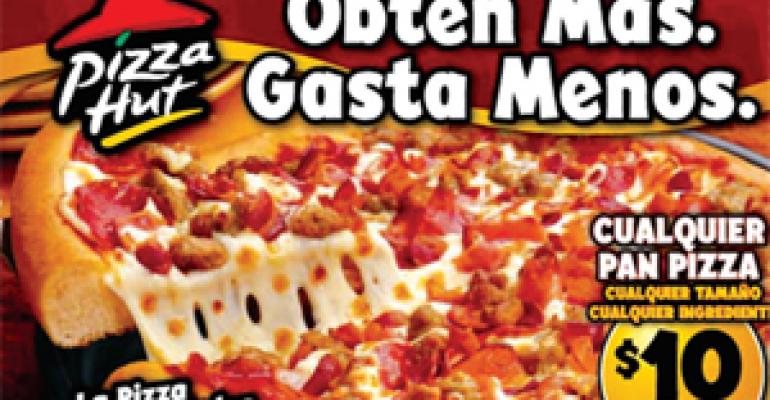 By now most restaurant operators are aware of the significant clout of the nation’s Hispanic population. They know that the demographic has swelled in numbers in recent years and is projected to continue to do so. They also have likely heard that Hispanic diners tend to spend more money when they eat at restaurants than other diners do.

With a road map so clearly drawn, any operator ignoring the direction of the arrows could be considered crazy. Yet many players in the casual-dinnerhouse segment appear to be taking a wrong turn by not courting Hispanic diners more actively, according to industry veterans, restaurant analysts and consumer researchers.

While quick-service chains are offering Spanish-language menus and launching advertising campaigns aimed at Spanish-speaking Hispanics at a dizzying pace, many casual-dining chains have failed to broaden the scope of their marketing outreach and are losing out because of that, observers say.

In the quick-service segment, Pizza Hut, owned by Yum! Brands Inc., introduced late last month a Spanish-language online ordering system to complement a Spanish-language website that was first launched in 2005. Taco Bell, also owned by Louisville, Ky.-based Yum Brands, ran Spanish-language advertisements in Hispanic publications to quell fears surrounding its E. coli outbreak in December. Other brands as varied as Papa John’s, Denny’s and El Pollo Loco also have stepped up efforts aimed at Spanish-speaking consumers and employees. Many casual dinnerhouses, on the other hand, are lagging behind.

“Clearly, there is untapped potential here,” says Bob Sandelman, chief executive of market research firm Sandelman & Associates. “If casual-dining chains can make the Hispanic diner feel welcome and target that group specifically with menu offerings and a price-value relationship they desire, they could attract those not in the category and those that do come to come more often.”

Sandelman says that research conducted by his San Clemente, Calif.-based firm in the second half of 2006 within a largely Hispanic Los Angeles neighborhood shows that nine out of 10 Hispanic diners visit quick-service restaurants at least once a month. That rate matches the general population. When it comes to casual dining, however, just seven out of 10 Hispanic diners visit a dinnerhouse at least once a month, versus nine out of 10 in the general population.

That difference likely lies in the fact that quick-service brands have been targeting Hispanic diners for a longer period of time than casual-dining brands, Sandelman says.

“QSR realized this is formidable and attractive,” he says. “Plus, many QSR ads are price- and promotion-oriented, and that’s attractive to the Hispanic population. Still, Hispanics tend to be more likely to have a larger party size and to make dining out more of an occasion…which is exactly what dinnerhouses are about.”

Warren Solochek, vice president of client services at research firm The NPD Group, says casual-dining operators must learn to communicate with this audience to tap into its increasing share of restaurant spending.

Speaking recently at the Norman E. Brinker Institute for Hospitality and Restaurant Management at Southern Methodist University in Dallas, Solochek cited U.S. Census Bureau figures showing the number of Hispanics in the United States nearly tripling between 1980 and 2004, up from 14.6 million to 41.3 million.

Solochek says this growing customer base should force restaurateurs to provide Spanish-language menus and advertising and promotions, as well as hire staff members who speak the language.

Operators who want to capture the lucrative repeat business so vital to any restaurant’s health need to “create a comfortable environment so [Spanish-speaking customers] will come back,” he says.

Numerous casual-dining chains were contacted to comment on their efforts to court the Hispanic population for this article, and the vast majority either declined or never returned phone calls. A few, however, did agree to discuss their efforts to attract a more diverse consumer base.

Darden Restaurants Inc., the largest casual-dining company in terms of sales, always has extolled the virtues of diversity and has translated that into marketing and advertising specifically targeted to various consumer demographics, including Hispanic diners, officials say.

At Olive Garden, the chain has been running Spanish-language advertisements for years in at least 11 U.S. markets. More recently, Red Lobster began airing chef tips and recipe suggestions on Univision, the Spanish-language channel that targets the U.S. Hispanic population.

“Mostly, what we’re doing with diners and employees is making sure that everyone feels welcome and included,” says Linda Landman-Gonzalez, Darden’s director of diversity and community affairs. “We do market research and gather insight into what everyone considers a great dining experience. We want to make sure we’re affording that to everyone.”

However, providing Spanish-language materials for Hispanic diners or employees is not as easy as simply translating from English-language materials, Landman-Gonzalez says. In an oft-cited example, Olive Garden’s tagline, “When you’re here, you’re family,” does not translate to an appropriate sentiment for Spanish-speaking Hispanics.

“It doesn’t make sense in the Hispanic culture,” she says. “Family is one thing, but how you feel in my home is what resonates.”

The tagline became “Aquí estás en casa,” or “You are home here.”

“You communicate differently in different cultures,” Landman-Gonzalez says. “You need to make sure you’re communicating in the most effective ways possible.”

Darden’s efforts have increased visits to its restaurants among Hispanic diners, Landman-Gonzalez notes.

“We know that we overindex in Hispanic guests versus any other casual-dining chain,” she says. “Actually, we overindex in all minorities at all our concepts…but it just didn’t happen that way.”

For instance, because both African-American and Hispanic diners tend to frequent dinnerhouses on special occasions and with large parties, according to Landman-Gonzalez, Darden is working to include larger tables and booths into new and existing restaurants.

It’s not only the company’s commitment to diversity that drives such changes, it’s a business strategy, she says.

“We feed 3 million people a year and have 150,000 people in our workforce,” Landman-Gonzalez says. “We need to understand their perceptions of what makes a great place to work and to dine.”

Johnny Carino’s Italian, the 142-unit casual-dinnerhouse chain operated or franchised by Fired Up Inc., also has capitalized on the incremental sales that courting Hispanic diners can bring. The Austin, Texas-based company and its chain have used Spanish-language radio advertisements and billboards for many years. The chain’s billboards appear on both sides of the border between the United States and Mexico. According to Fired Up chief executive and founder Norman Abdallah, serving both Hispanic and non-Hispanic consumer leads to increased sales, which helps to minimize the pain of more complicated operations.

At Boston’s The Gourmet Pizza chain, targeting a more diverse consumer base and expanding into underserved markets is part of the company’s growth strategy. The 46-unit chain has one restaurant in Mexico, a move that forced the company, Boston Pizza Restaurants LP, to translate into Spanish all its materials from menus to training manuals, says Ted Beaman, the company’s vice president of business development.

While there is not enough money to develop Spanish-language marketing and advertising systemwide, Boston’s knows that will be necessary when the system grows large enough for media efficiencies.

For now, the company is working to expand its concept through new-unit development in both traditional casual-dining markets—like middle-class, mostly white suburbs—as well as nontraditional markets, like inner cities, or “majority-minority” neighborhoods, Beaman says.

“As we look at the United States and the growth potential for our brand, certainly there is vast opportunity for traditional markets,” he says. “But there is a growing amount of areas that will become majority-minority over the next couple of years… It makes sense to explain our brand to people early on…so we can grow with the population.”

In addition, in late 2006 Boston’s signed a franchise contract with Infinity Redevelopment LLC, a franchisee that rehabilitates and develops areas typically ignored by mainstream developers. Infinity’s owner and president, Curtis Fralin, approached Boston’s to develop at least 10 restaurants in urban Los Angeles, and expects to open the first unit within 12 months.

As some restaurant companies attempt to tap into the U.S. Hispanic market with targeted outreach, the investment community also is looking to capitalize on the spending power of the growing Hispanic population—a reality that could benefit savvy casual-dinnerhouse operators.

Certain private-equity firms have made it known they are looking to purchase or invest in concepts that have demonstrated success with the U.S. Hispanic demographic. In 2005, New York-based Palladium Equity Partners purchased Taco Bueno, a 145-unit Mexican quick-service chain, and said its future investment strategy would particularly focus on companies that cater to the fast-growing U.S. Hispanic population. Palladium itself is a minority-owned business, and the majority of employees and partners are of Hispanic descent or were born in Spanish-speaking countries.

“The U.S. Hispanic market exhibits favorable characteristics for private-equity investing, including a young, fast-growing population that fuels growth in consumption and business formation,” Palladium says on its website.

Last month, Washington, D.C.-based ACON Investments purchased Peter Piper, a 132-unit pizza and entertainment chain that has met with great success among U.S. Hispanics. While terms of the deal were not disclosed, Peter Piper said it would receive funding for future growth.

In outlining its latest investment, ACON said in a statement that the fund saw a “terrific opportunity to take advantage of the continued growth and expanding purchasing power of the Hispanic population.”

Other private-equity firms actively seeking to invest in companies targeting the Hispanic population include Nogales Investors, Rustic Canyon/Fontis Partners and Linea Capital, according to published reports.

Ron Ruggless contributed to this report