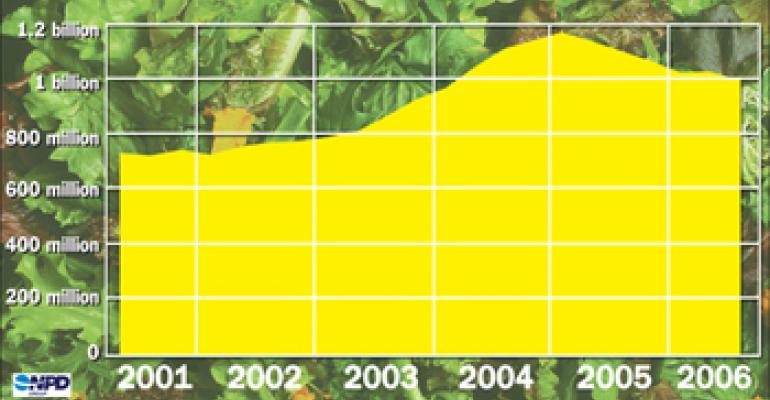 Despite all the attention focused on Americans’ expanding waistlines, dieting among U.S. adults is at an all-time low—a befuddling reality for operators trying to serve up more healthful fare.

According to new data from the NPD Group, a Port Washington, N.Y.-based global market research firm, 23 percent of the American adult population is on a diet at any given moment—the lowest percentage since NPD began tracking Americans’ eating habits in the 1980s.

Meanwhile, the number of people who said they want to lose weight is growing, with 40 percent of respondents reporting they would like to shed pounds but aren’t consciously dieting.

For some restaurateurs, these mixed messages are an operational nightmare, as those who do proffer more healthful or dietetic options frequently end up throwing out unused inventory.

“We want health, but we want the latest,” says NPD vice president Harry Balzer. “The No. 1 reason that dieting is at an all-time low is that fewer people are getting advice to diet from a doctor.”

While dieting advice used to come primarily from doctors, he says, today it comes from a variety of sources, including books, television and the Internet. Nonetheless, the advice Americans seem to like best is their own.

But both dieters and nondieters in the United States are falling short of healthful guidelines. According to NPD data, more than 90 percent of American adults fail to meet the U.S. Food and Drug Administration’s recommended daily servings of vegetables, fruit and dairy, and more than half of all adults are not getting enough of important nutrients such as calcium, magnesium, vitamin A, vitamin, C, vitamin E, folate and iron.

Both at home and in restaurants, salads are a popular way for Americans to get their veggies. According to NPD, 16 percent of in-home dinners and 15 percent of restaurant dinners feature salad.

In recent years, the restaurant industry has responded to consumers’ talk about slimming down and eating better by providing more healthful alternatives on menus, including premium salads, light menus, Weight Watchers menus and more options for combo and kids’ meals.

The Oakbrook, Ill.-based chain offers several premium salads, including an Asian salad, a Caesar salad, a bacon ranch salad, and a fruit and walnut salad. McDonald’s says it has sold 600 million premium salads since introducing them four years ago.

Although salads are a very small percentage of total sales, Carl’s Jr. continues to innovate, offering one or two new salads each year, Haley said. Sales tend to spike during the summer months and post-holiday season, he added, when consumers tend to have a renewed interest in eating more healthful foods.

Just as salad bars faded in popularity, premium entrée salads may soon meet the same fate. According to NPD, entrée salad sales at quick-service restaurants steadily increased and then peaked between late 2004 and early 2005. Sales began decreasing in early 2005. Despite the fact that consumers are still ordering salads, Balzer thinks the trend may have run its course.

“The thing with health … the only thing you can count on is that people move toward the latest healthy thing,” Balzer says.

One of the newest healthy menu additions is milk. Like salads, milk has been on quick-service menus for decades, but has recently experienced renewed interest from consumers. Most of the big quick-service chains recently have added milk and or juice beverage options in kids’ meals. As a result, consumers are increasingly substituting milk and juice for carbonated soft drinks in kids’ meals. According to the NPD data, between August 2003 and August 2006 consumption of milk was up 11 percent and juice was up 7 percent. During the same period, consumption of carbonated soft drinks dipped 15 percent.

One chain that has seen big success from this more healthful dairy option is Dublin, Ohio-based Wendy’s, which introduced milk in grab-and-go, resealable plastic containers in 2004 as a substitute for soft drinks. Since that time, the chain reports that milk sales have averaged about 750,000 units per week, compared to 54,000 before the introduction of its Kids’ Meal Choices program. Despite the product’s success, the increase in milk sales may not be attributable only to consumers’ desire to make more healthful choices. Because many chains long have had milk on their menus in cardboard cartons, some industry observers say the recent growth in fast-food milk sales is because of the new, more portable packaging and stepped up marketing by chains.

Some chains have even gone as far as partnering with leading diet brands, creating and marketing special menus targeted at those consumers.

For instance, Overland Park, Kan.-based Applebee’s in May 2004 began offering a Weight Watchers menu featuring 10 menu selections in each of its nearly 1,600 restaurants nationwide.

The latest trend impacting American eating habits isn’t what, but how much, consumers eat.

“One of the hottest health trends in America is the 100-calorie packets in the grocery stores,” Balzer says, noting the host of downsized portions of crackers, chips and canned soups designed to fulfill consumers’ desire for portion control. Some grocery chains, such as New York-based Fresh Direct, have even introduced portion-controlled prepared meals.

Restaurants have not wholeheartedly embraced the notion of portion control yet, but some quick-service chains are making strides with the introduction of snack items. These smaller, slightly modified versions of existing menu items offer consumers an easy way to cut portions and calories while still getting what they want.

In February 2005, Louisville, Ky.-based KFC introduced a pared-down chicken sandwich called the KFC Snacker, which features a breaded chicken strip topped with lettuce and pepper mayonnaise and served on a warm sesame seed bun. The Snacker, which is a smaller version of the chain’s Double Crunch sandwich, is about half the size of that item and has 200 fewer calories.

Despite its name, the Snacker, which comes in varieties such as Crispy Snacker, Honey BBQ Snacker, Buffalo Snacker and Ultimate Cheese Snacker, is most popular during the lunch daypart. According to the chain, 56 percent of Snackers are sold during lunch.

Women in particular are eating up the new product, purchasing 42 percent of all Snackers, KFC reports.

“In focus groups, females have commented on the portion-control factor that Snacker has,” says Valerie Zanchettin, product manager for the KFC Snacker line.

Similarly, McDonald’s, which says it gives consumers the ability to control portions by offering a variety of food choices in several serving sizes, last August rolled out its Snack Wrap, which features warm crispy chicken, lettuce, Jack cheese and ranch dressing wrapped inside a tortilla. The Snack Wrap is about half the size and has about 200 fewer calories than the chain’s Classic Crispy Chicken Sandwich. According to the chain, consumers are purchasing this item both as a snack and as a smaller sandwich meal.

With more than 50 percent of its business coming from the drive-thru, McDonald’s says portability is a major factor for its consumers. According to the chain, that portability is one reason why consumers find the Snack Wrap so appealing.