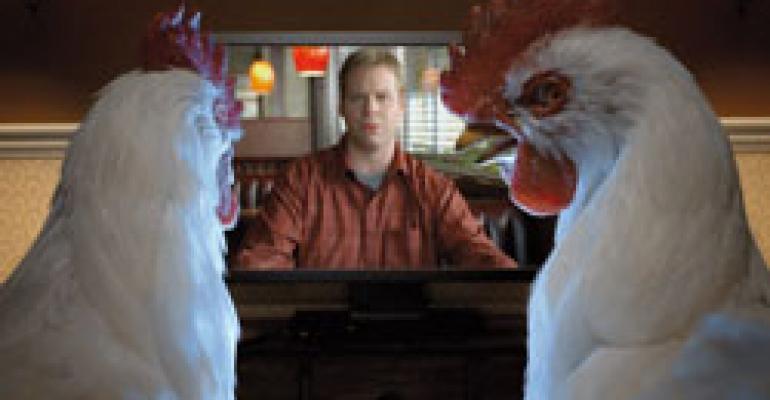 SPARTANBURG S.C. Hoping to repeat the same victory it scored last year, Denny's will again offer free Grand Slam breakfasts in a promotion that will be announced during the Super Bowl.

The 1,500-unit family-dining chain said it served 2million Grand Slams during last year's giveaway, which it also publicized in a Super Bowl ad. This year's promotion will be held Feb. 9, from 6 a.m. to 2 p.m., at participating restaurants.

“We are leveraging the power of the Super Bowl once again to connect with our customers to keep Denny’s in their hearts and minds,” said Nelson Marchioli, the brand’s president and chief executive.

The ad set to air during the Super Bowl on Feb. 7 explains that "it's going to be a tough week for egg layers" as chickens featured throughout the spot express shock over the free breakfast offer, Denny's said.

Denny’s offered the first giveaway in an attempt to lure back lapsed users of the brand and also introduce consumers to a variety of new menu items. At the time, officials for Denny’s said the promotion, which cost $5 million, garnered “the equivalent of $50 million in free public relations.” The event was prominently featured in newspapers and on national and local news broadcasts across the country.

Denny’s, like many full-service restaurant chains, has experienced slumping sales during the economic downturn. In its Sept. 30-ended third quarter, the company reported same-store sales declines of 6.6 percent at corporate restaurants and 7.3 percent at franchised locations.

In addition to the Grand Slam giveaway, Denny's said it would look to highlight value throughout the year with other initiatives, such as free Grand Slam breakfasts on birthdays and free refills on pancakes or French fries.

“We know that times are still tough and a free, hot breakfast helps a lot of folks and their families,” Marchioli said. “We heard from thousands last year who thanked us. This year Denny’s will go beyond just one day of free meals by offering a number of everyday affordable programs all year.”