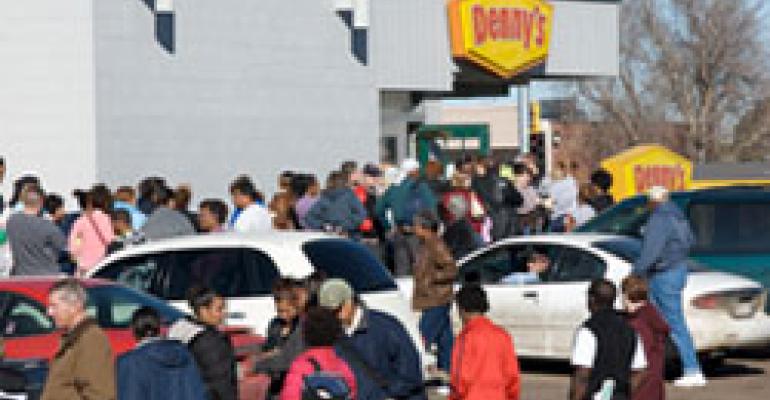 Seeing a long line in the parking lot of one Denny’s in Aurora, Colo., Aaron Phelka and his friends Ricardo Morrison and Eric “Chipz” Jernigan went undeterred to another Denny’s location at the north end of town. Wait times around the country had been pegged at more than an hour. In this city outside of Denver, the wait was only about 30 minutes.

The trio all had the day off from work, and having seen Denny’s Super Bowl ad for the free Grand Slam breakfast, decided to check it out. Phelka and Morrison have been occasional customers of Denny’s, but Jernigan estimated he hadn’t been to the chain for at least 10 years.

From his lips to the ears of Denny’s chief executive.

The main purpose of Denny’s Tuesday giveaway was to build customer traffic and to reintroduce the decades-old, family-dining chain to customers that may not remember, or maybe never have experienced, the Denny’s brand. Nelson Marchioli, Denny’s chief executive, has said he wants Denny’s newest marketing and advertising to help the chain “reconnect with those consumers.”

Traffic was not an issue for the chain on Tuesday. By all accounts, Denny’s units around the country were filled to the brim.

“We are hitting all projections and then some,” said Mark Chmiel, Denny’s executive vice president and chief marketing officer. “This is a massive trial event to bring back lapsed users ... and we will see a payout for at least six months.”

Breakfast, a growing daypart for much of the industry, has seen increased competition from both family-dining chains and quick-service brands. IHOP, McDonald’s, Dunkin Donuts and even Jamba Juice have focused on breakfast through giveaways, intense marketing and new menu platforms. Denny’s is looking to “steal share” from those competitors by showcasing its speed of service, food quality and hospitality, Chmiel said.

In addition, the one-day freebie is being used to entice customers into later visits through coupon books and even rain checks for consumers who couldn’t stay for the long waits on Tuesday. Restaurants also were encouraged to promote Denny’s newest menu items, like the Pancake Puppies, which are doughnut-hole-like balls made with pancake batter. At the north Aurora, Colo. store, general manger Sharon Harper brought out trays of Pancake Puppies for customers to try while they stood in line.

Chad Collins, area manager for the Colorado stores, spent Tuesday refilling coffee cups and talking to customers. All the restaurants were filled to capacity throughout the day, with lines stretching around the buildings and through parking lots.

Denny’s area and restaurant managers had been planning for the big day for the past two weeks, preparing to make and serve 100 Grand Slams per hour. The chain’s well-known breakfast contains two eggs cooked to order, two pancakes, two pieces of bacon and two links of sausage. The hourly staff had been told that Denny’s would launch a special promotion Tuesday, but they didn’t learn that it would be a free meal until the whole country found out when Denny’s ran its ad during the Super Bowl on Sunday, Collins said.

Most reports put the cost of Denny’s spot at $3 million.

“I told our people, today is not about tips, it’s about reconnecting with our customers,” Collins said. “We’re taking breakfast back.”

Some customers in line admitted it had been months and even years since they had dined at a Denny’s.

Denny’s “used to be a happening place,” said David Flance, 29, of Monroe Township, N.J. He was visiting a location in East Brunswick, N.J., on Tuesday morning, and said he remembers going to Denny’s late at night when he was in high school. Since then, he said, “it just grew trashy.”

“But this move was smart,” he said. “Everyone around the country saw that ad ... and when people are strapped for cash, like today, maybe they’ll see Denny’s and its inexpensive menu and come back.”

The East Brunswick Denny’s was packed to capacity, and a security guard was used to keep the doorway areas clear. The crowd contained senior citizens, young families with children and teenagers on their way to school.

Agroup of high school students leaving the restaurant said they typically chose other family-dining chains over Denny’s, but they said they would come back to the restaurant because the portions were large and the chain is open late.

The idea for the industry’s first nationwide full-meal freebie at a sit-down chain had been discussed on and off at Denny’s for about two years, CMO Chmiel said.

To pull it off, Denny’s looked at the traffic, staffing and food costs for a typical Christmas day, which is its busiest day of the year, and then pared those statistics down to what would be needed for eight hours. Tuesday’s promotion was offered between 6 a.m. and 2 p.m.

At first, some operators were skeptical, Chmiel said, but as Denny’s narrowed the promotion down to a set time of day, to one meal and offered corporate support, they all got on board. Starting in December, Denny’s officials went to 12 markets and met with franchised and corporate operators to discuss the promotion. Denny’s also ordered and shipped all of the needed products to all locations from corporate headquarters.

“We didn’t want anyone to think ‘Let’s just get through this,” Chmiel said. “We wanted them to think, ‘Let’s have fun with this.’”

Denny’s would not reveal the cost of the promotion, but Chmiel said he had no doubt the company would at least break even because of the huge traffic jumps and the sales of add-ons, like hash browns and beverages, that were not included in the free meal.

Promotions, like IHOP’s All You Can Eat Pancakes or Red Lobster’s Never Ending Shrimp, can sometimes make or break a chain’s annual sales target, and Denny’s is already considering whether to make this Grand Slam giveaway an annual event, but wouldn’t come to any decisions until the promotion is completely analyzed, Chmiel noted.