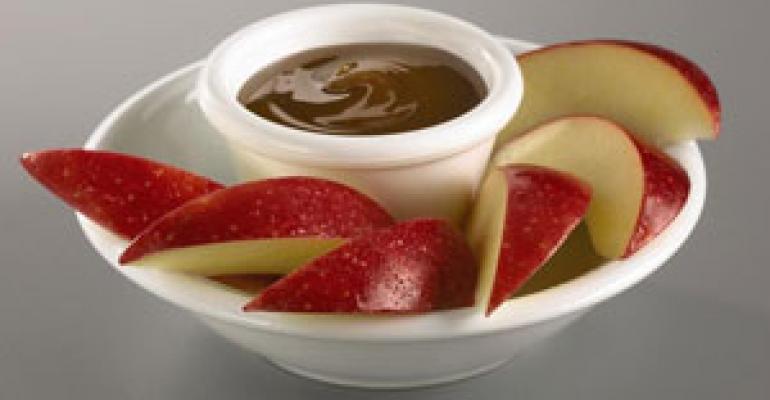 SPARTANBURG S.C. Denny's said Monday it has added more healthful options to its kids' menu, including vanilla yogurt and apple slices, as part of its Better For You campaign.

The 1,500-unit family-dining chain launched the campaign in June in an effort to provide affordable, healthful meal options. The Better For You options already include such items as fresh fruit, granola and yogurt as well as egg whites, turkey bacon and chicken sausage as breakfast substitutes.

The new kids' menu items include Tumbling Vanilla, made with vanilla yogurt with strawberry topping; Apple Dunkers with caramel sauce; Spaghetti, Set, Go!, which is spaghetti with marinara sauce; and High Diving Veggies, which consists of carrots, celery and cucumber along with dip. Prices start at $2.99.

“Denny’s is proactively and voluntarily adjusting and amending its menus to provide better for you but still fun choices for children whose families dine with us,” said John Dillon, vice president of marketing and product development.

In recent months, Denny’s has become the subject of a nutrition lawsuit filed by the Center for Science in the Public Interest. The Washington-based advocacy group initiated the suit on behalf of a 48-year-old New Jersey man with hypertension who claimed he was misled by the chain over its lack of information concerning the high amount of sodium in some of Denny’s menu items.

Last week, a new study by Mintel found that many kids' menus at restaurants lack healthful options despite growing interest in nutritious fare from both children and parents.