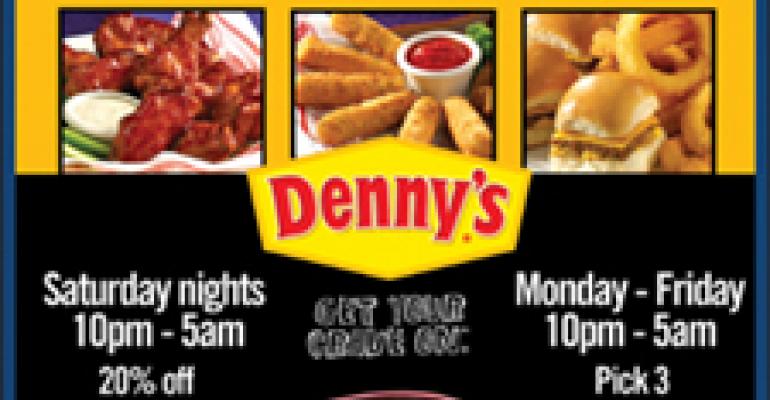 SPARTANBURG, S.C. Denny’s is targeting the lucrative college student market with a multimedia test promotion that has the potential to add full-service ammunition to an already heated quick-service battle for young diners seeking late-night meals. —

The promotion, timed to coincide with final exams, is geared toward students in Austin, Texas, and Syracuse, N.Y., who attend colleges and universities near Denny’s branches. Initially, seven Denny’s in the Austin market and eight in Syracuse are participating in the promotion, which offers food discounts, free Wi-Fi access and a chance to win gift cards. —

Expected to be expanded to many more markets, the promotional tack by the industry’s largest family-style chain is Denny’s strongest ever aimed at 18- to 24-year-olds. It represents the chain’s bid to counter moves by Wendy’s, White Castle, Taco Bell, McDonald’s and others aiming for increased late-night dining among young consumers. —

Denny’s college-focused promotion grew out of a decision to “look at each daypart as a specific business and create marketing programs to target specific customers,” said Michael Polydoroff, director of sales promotions and licensing for the 1,545-unit chain. —

Although Denny’s attracts a substantial share of young late-night diners, it’s aware of the potential erosion in business from quick-service chains and some casual-dining chains that have extended their business hours. —

“But we also know that we laid claim to 24-hour business,” Polydoroff said, emphasizing the chain’s night-owl traditions. —

Denny’s plans to expand the program in the fall to “probably 10 more markets,” he said. Such a move would increase the competition to snag college students, who spend nearly $17 billion a year—the bulk of their discretionary income—on food, according to the 2006 Alloy College Explorer Study by New York-based Alloy Media + Marketing. —

More marketers are beginning to look at college students as a subsegment of the general market that requires separate marketing programs, Skey said. —

Rival family-dining operator IHOP advertised on the social-network website Facebook.com late last year and is evaluating the results of the effort, said Patrick Lenow, the chain’s director of communications. —

IHOP restaurants in college towns target students with ads in college newspapers and “do very strong business” among students, he said. —

The college student market is seen as so lucrative that even such small chains as 14-unit Toppers Pizza, based in Whitewater, Wis., are going after that crowd. Toppers launched what it called a “radical repositioning” last year and now targets college students exclusively. —

Denny’s plan is to become a “social gathering” place for students who want to study for exams or meet with friends over a sit-down meal instead of grabbing a quick burger at a fast-food drive-thru, Polydoroff said. —

To lure them in during the promotion, Denny’s is offering meal deals because students are on a budget, he said, and using free Wi-Fi, text messages and banner ads on to communicate with students because they are heavy users of those media. —

“It’s pretty new and significant for us,” Polydoroff said. “We never did text messaging before.” —

During late-night hours Mondays through Fridays, Denny’s is offering “Pick 3” appetizers for $9.99. On Saturday nights, students who show a college identification card receive 20 percent off their checks. —

An online “Denny’s Study Break Sweepstakes” offers a Dell gift card and a Denny’s gift card as prizes. A text-messaging offer awards free beverages to students who show the message at the cash register. —

The restaurants themselves have adopted a student-friendly ambience. Servers wear jeans and T-shirts, and current pop music plays through the restaurant. —

Offering free Wi-Fi also is an advantage because students working on papers can use it for research, he said. —

Targeting students is a good move because they’re more receptive to trying different brands than older consumers are, Ries said, because older consumers have strong brand preferences and are reluctant to change them. —

Alloy’s Skey said students are likely to be interested in a brand like Denny’s because the restaurant is open around the clock and offers immediate access to “sit and hang out at any time of the day, not just during normal meal hours.” —

She also said Denny’s choice of college newspapers and as marketing media “make a lot of sense,” but she questioned whether students would use the coupons. Unless the offer is exceptional, Skey said, coupons and college students “have never been a great match.” —

Denny’s will track the promotion’s success through coupon redemption and the number of students who enter the sweepstakes, visit its website and participate in the text-messaging promotion, Polydoroff said. —

Despite the quick-service sector’s head start, Denny’s believes it also can get more young people into its restaurants, he said. —

“We feel like there’s still an opportunity to speak to them,” he said. —