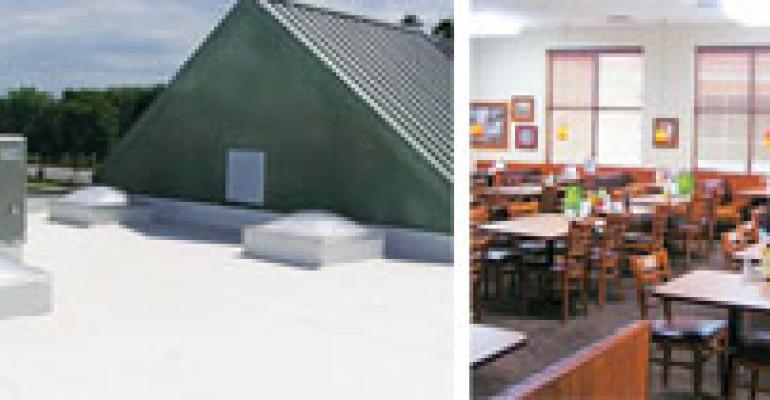 Asteam-heated griddle that’s an energy miser, “smart” deep-fryers that power down when idle and exhaust hood fans that match their speed to the cooking load are helping a Denny’s franchise owner in suburban Chicago slash operating costs and model the first green restaurant of the 1,500-unit family-dining chain.

“The savings are just amazing,” franchisee Joey Terrell said, referring to the 4,000-square-foot, 110-seat new Denny’s he opened in Joliet, Ill., last December. Over the first half of 2009, the green eatery used $10,000 less in electricity, gas and water than the similarly sized, conventionally equipped, 20-year-old Denny’s he owns in nearby Mokena, Ill.

Terrell expects the Joliet store to receive the U.S. Green Building Council’s Leadership in Energy and Environmental Design certification by year’s end, making it Spartanburg, S.C.-based Denny’s first LEED unit. It was built with extensive recycled building materials and eco-friendly features like mirrored skylights that capture daylight and “light-harvesting” fluorescent lights that dim or brighten depending on the amount of natural light. However, most of the savings result from energy-efficient equipment, Terrell said.

For example, there’s a triple-vat deep-fryer system that alone saves more than $11 worth of gas per day compared to an ordinary fryer, Terrell said. That’s because of digital controls that reduce the oil temperature when the unit is idle and bring it quickly to full temperature for cooking.

Also important is an AccuTemp griddle, the first griddle to receive Energy Star qualification for energy conservation. The steam-heated device maintains a uniform temperature across the entire cooking surface for greater productivity and efficiency, Terrell noted.

Another energy saver is a demand-ventilation hood system that electronically senses heat and cooking effluents. When none are present, it slows down the exhaust fans. When it detects them, it speeds the fans up. “In many restaurants, the fans run constantly,” Terrell said. “But you don’t need them running full speed at 3 a.m.”

Even with all the eco-friendly trappings, Terrell said the green Denny’s cost about $800,000 to build, slightly under the cost of building a Denny’s with conventional materials and equipment. Denny’s corporate buying power was “a tremendous benefit” in helping him stay within budget, he said. Next year he plans a green remodel of his Mokena store.

“Being green has brought us a lot of recognition, but that’s not why we did it,” Terrell said. “It’s the right thing to do, and it saves us money.”