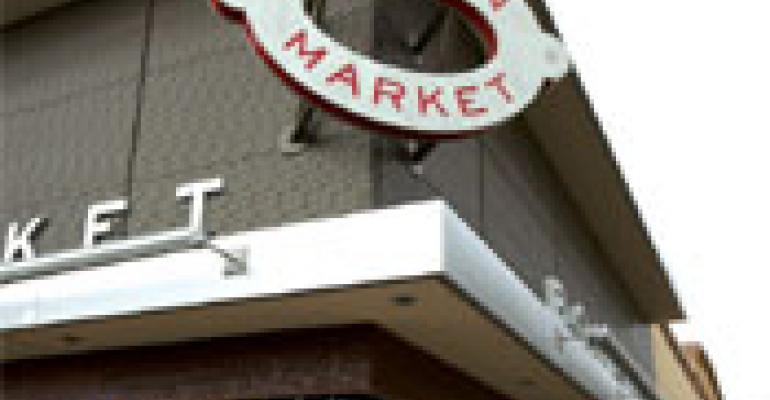 While the tightened credit markets slowed deal making in many industries during the later half of 2007, the restaurant sector continued to close deals both large and small largely unabated. The final months of the year—which saw the closures of IHOP’s acquisition of Applebee’s, Darden’s purchase of Rare Hospitality and even the long-awaited sale of Dunkin’ Brands’ Togo’s chain—capped off another frenetic year of buying and selling.

The credit crunch did cause some roadblocks, as a handful of restaurant deals were delayed until more favorable terms could be arranged. At press time, a deal for WENDY’S—expected to be a multibillion-dollar one—was still up in the air, with just one confirmed offer from activist investor Nelson Peltz, who also runs Arby’s parent company, Triarc Cos. Inc.

The largest deal of the year, however, the $3.2 billion private-equity sponsored and management-led buyout of Outback Steakhouse parent OSI RESTAURANT PARTNERS INC., went off without a hitch in June. Under the new ownership of Bain Capital Partners LLC, Catterton Management Co. LLC and the company’s founders, OSI has been focusing on a turnaround of its flagship concept, the 953-unit Outback chain. It also has been working on deals to sell the company’s developing brands, which include Carrabba’s Italian Grill, Fleming’s Prime Steakhouse & Wine Bar, Bonefish Grill, Cheeseburger in Paradise, Lee Roy Selmon’s, Roy’s and Blue Coral Seafood & Spirits. In October OSI agreed to sell an 80-percent stake in Lee Roy Selmon’s, and in November the company’s chairman, Chris Sullivan, confirmed that OSI was shopping around Roy’s, the 34-unit casual chain named after famed Hawaiian chef Roy Yamaguchi.

While deals continued to boil over in 2007, what was missing this year were blockbuster initial public offerings from heavyweights like CHIPOTLE,BURGER KING and TIM HORTONS, all of which went public in 2006.This year, just one restaurant company held an initial offering on either of the major stock exchanges: Einstein Noah Restaurant Group Inc., which is parent to three bagel chains and garnered about $83.7 million in an IPO in June. Einstein Noah is the former New World Restaurant Group Inc., which had traded on the pink sheets prior to its Nasdaq offering.

In the merger-and-acquisition playing field, 2007 also marked a slight departure from years earlier, as private-equity firms did not capture the biggest headlines. While the Outback deal trumped all in terms of dollars, it was IHOP’s $1.9 billion cash buyout of APPLEBEE’S and DARDEN’S $1.4 billion cash buyout of RARE HOSPITALITY that caught the industry’s attention. Both buyers financed their purchases through debt and now rival each other as the largest full-service restaurant companies. Through Darden’s chains, which include, among others, Red Lobster, Olive Garden, and now LongHorn Steakhouse and The Capital Grille, systemwide sales should total about $6.6 billion. Under IHOP’s umbrella, systemwide sales from the company’s two chains, the namesake pancake house and casual-dining giant Applebee’s, should total about $6.8 billion.

Other strategic purchasers in fiscal 2007 include STAR BUFFET INC., which operates about 50 franchised buffet-style and steakhouse restaurants and made no less than six transactions this year, snatching up restaurants operating under the HOMETOWN BUFFET and WESTERN SIZZLIN brands. The parent to the Fox & Hound Restaurant Group,F&H ACQUISITION CORP., purchased the CHAMPPS casual-dining chain for about $75 million in July. Restaurants Unlimited, an upscale casual operator with more than five brands, acquired another upscale-casual restaurant group, Pacific Coast Restaurants Inc.

In the same vein, the PATINA RESTAURANT GROUP LLC, an operator of about 65 upscale concepts, partnered with private-equity firm BUNKER HILL CAPITAL LP to acquire THE SMITH & WOLLENSKY RESTAURANT GROUP INC., the upscalesteakhouse operator, for about $90 million. That deal included a bidding war with another suitor, Landry’s Restaurants Inc., which had wanted to acquire a high-end concept after shedding its casual-dining Joe’s Crab Shack in late 2006.

BAJA CHICKEN SUB, with bacon, smoky Baja sauce, mild chipotle mayonnaise, Cheddar and fresh cilantro, which is selling for $4.49 for a small, $5.99 for a regular and $8.29 for a large in Princeton, N.J., from Denver-based Quiznos.

MCSKILLET BURRITO, $2.49, from McDonald’s, based in Oak Brook, Ill.

THE BACONATOR—two quarter-pound hamburger patties, two slices of American cheese, six slices of bacon, cheese sauce and mayonnaise from Wendy’s, based in Dublin, Ohio, selling for $5.19 in New York City.

CHOCOLATE OVERLOAD CAKE, suggested price $1.69, from Jack in the Box, based in San Diego.

TOASTED FENNEL AND TANDOORI CHICKEN SALAD with low-fat pomegranate dressing, cucumbers, carrots, mixed greens, and a warm flat bread, approximately $7, depending on the market, from Così, based in Deerfield, Ill.

Regional Chinese menus such as Flavors of Yunnan, from P.F. CHANG’S, based in Scottsdale, Ariz.

Still, private-equity buyers were hardly absent in 2007. SUN CAPITAL PARTNERS INC., a private-equity firm based in Boca Raton, Fla., that has about $10 billion under management, went on a shopping spree this year, acquiring the FRIENDLY’S, BOSTON MARKET and SMOKEY BONES BARBEQUE & GRILL chains, to name just the largest purchases. Those investments filled out a restaurant portfolio that already included the Bruegger’s, Fazoli’s, El Torito and Souper Salad brands, again, to name a few. Sun Capital’s 2007 dealings were estimated to total well over $600 million. In December, the company said its 2,200 restaurant locations recorded systemwide sales of $3.4 billion.

ROARK CAPITAL GROUP, another large restaurant investor that owns the franchisor Focus Brands Inc., made an additional purchase in 2007, grabbing in August MOE’S SOUTHWEST GRILL, a fast-casual chain that will join such brands as Carvel Ice Cream, Cinnabon, Seattle’s Best and Schlotzsky’s in Focus’ portfolio. An affiliate of TRIMARAN CAPITAL PARTNERS bought BUGABOO CREEK STEAK HOUSE from Rare Hospitality for about $40 million. New to the restaurant sector, REDZONE CAPITAL GROUP LLC—the private-equity firm founded by Daniel M. Snyder and Dwight C. Schar, owners of the Washington Redskins NFL franchise—purchased JOHNNY ROCKETS in early 2007. While the terms were not disclosed, some analysts calculated that the value of the well-known burger, fries and milk shake brand was more than $500 million.