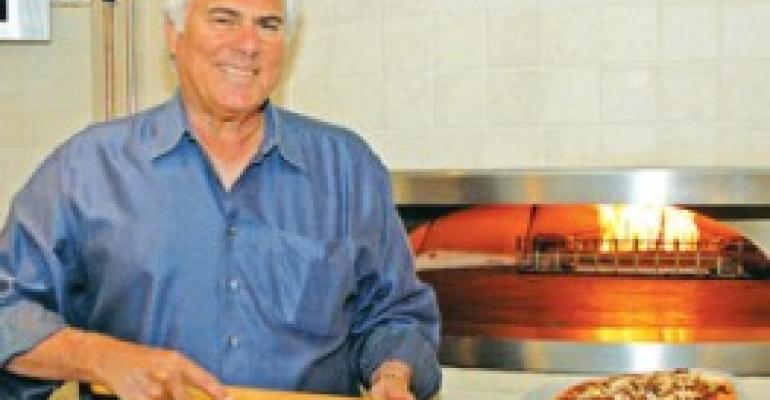 On the cutting edge; Foodies in suits: Larry Flax and Rick Rosenfield

California Pizza Kitchen Inc.’s test kitchen in Los Angeles is part menu developer’s fantasy office and part playground for the 200-unit chain’s co-chief executives, Larry Flax and Rick Rosenfield. Every sparkling piece of top-of-the-line equipment found in a CPK restaurant kitchen is here and at the ready when inspiration strikes.

Today, Flax is in the house creating a Korean-style barbecue pizza, a moment he regards as the “birth of a new dish.” In this delivery room, the doctor wears jeans, sneakers and a casual shirt—not even an apron—and his subtle grin proves this labor brings pleasure, not pain.

When the pizza, topped with a sweet-and-spicy Korean barbecue sauce, beef strips, cheese and scallions, emerges from the flames of the gas-fired brick oven, Flax morphs into a proud papa, holding up his new creation. The small adoring group before him admires it appreciatively—and then devours it happily.

“Do you like the sauce? That’s the main concern for me,” Flax says, adding that he got the sauce idea from CPK’s operating partner in Korea.

When his assistant retrieves version two from the oven, the addition of white onions displeases the group and Flax.

“I think I still like the first one better,” he says between bites of version two, the soon-to-be rejected child. “In fact, I think it’s going to test.”

Flax says he likes to “play around in the kitchen,” two to three times a week. Rosenfield, who was recovering from back surgery and not in the kitchen this day, is usually there, too, along with senior vice president of culinary development Brian Sullivan, who started at CPK as a cook 20 years ago. All three men say many of their ideas begin in their home kitchens before being perfected at work.

“I’ve always done all the cooking in our family; it’s my relaxation,” Rosenfield said later in a phone conversation. “Once, my daughter came in and saw my wife cooking and said, ‘Mommy, what are you doing? Where’s Daddy?’ Both Larry and I have always loved cooking and food.”

Back in the early 1980s, Flax and Rosenfield were trial lawyers with a passion for food. Fans of the Los Angeles restaurant scene, both became swept up in the California-style food movement. Knowing the rest of the nation hadn’t tried wood-fired California pizza and confident they’d fall in love with it too, the pair launched CPK 23 years ago.

After taking a pizza-making class led by the late Ed LaDou, the first pizza maker at Wolfgang Puck’s Spago, the two men hired him as a consultant to help start the venture. Rosenfield called the trio’s relationship “brief and stormy,” citing LaDou’s preference for avant-garde toppings and their desire for more familiar choices. Five weeks later, LaDou left the company, but in his wake was what would become CPK’s most famous and best-selling pizza, the Barbeque Chicken.

On any given day in 1985, “50 percent of the pizzas sold in our restaurant were Barbeque Chicken, while two were duck sausage and one was rabbit sausage, the stuff Ed wanted to do,” Rosenfield recalls.

The sales disparity proved to the owners that customers wanted unique pizzas, but not ones so distinctive they wouldn’t try them.

“I think we have the common touch with what we create,” Rosenfield says. “It’s innovative, but the American public can understand it. It’s not over the top. We give them tastes they can identify with.”

In rewriting the original menu, the men started with basic flavors and modernized them. Successful pizza ideas that followed included the B.L.T., the Thai Chicken and the Santa Fe. Their most successful salad ever is a twist on the top-selling pie, the Chopped Barbeque Chicken. Flax’s favorite salad is the still-popular Thai Crunch.

“These were flavors people understood and were willing to try in a different form,” Flax says. But playing with familiar ideas can become a double-edged sword, he adds. When he made a cheeseburger pizza for Rosenfield, his partner called it good but not great. “He said all it made him think of was a cheese-burger, not something more, which is what we want. We think our pizzas have to be a step up from that recognizable item, something different and unique. And if you don’t nail it as something different, who cares?”

Both agree their lack of formal culinary training has helped them be more creative and take chances they might otherwise not if they knew better.

“Food is a free-flowing art for me, so I have no rules,” Flax says. “I look at food as needing to appeal to every single sense we have. When I eat a thing like the Thai Crunch Salad, not only does it taste good and look great, I can hear it when I eat it. People love that.”

All three men say the flow of new ideas never stops. Their constant perusal of menus and magazines and visits to restaurants fuel the muse that strikes without warning. And when the ideas flow, the phones start ringing—sometimes at all hours of the day.

“We’re so collaborative that we talk all the time,” Rosenfield says. “Once, Larry’s wife counted that we talked on the phone 63 times in one day. We talk first thing in the morning and often late at night.”

Ultimately every dish on CPK’s menu is a combination of their ideas and Sullivan’s, and ideas are not dismissed without careful thought.

Sullivan elaborates: “First we have an internal debate over an idea, and if it sounds good, one of us will go make it. Many times we get it right the first time, but other times somebody has an opinion that puts a different twist on it, and it makes it better.”

Despite how good a new dish may taste, Sullivan says if it’s not executable in the restaurant 100 percent of the time, it’s doomed. If it does work, then it goes to an initial test in the restaurant connected to the test kitchen. Using electronic customer feedback surveys at the table, they learn quickly whether the idea works with customers or whether tweaks are needed.

If the dish proves viable, the test spreads to a handful of markets spread geographically across the United States. Flax says scattering new items over wide-ranging markets gives them a more accurate indication of how they’ll do nationally. To pass muster, a new item must generate at least 3 percent of sales in its menu category. When market tests are complete and deemed satisfactory, the item goes to the new menu, which is rolled out twice a year.

Yet for all that testing success, there’s no guarantee the item will be a long-term hit. Sullivan’s Cajun pizza will soon suffer such a fate. Now on the menu, its spicy slices will disappear when the June menu rolls out.

“It tested well,” he says, “but when we put it in restaurants, it sank to the bottom like a rock. Needless to say, it missed the mark.”

The founders have had their flops, too, most famously, Flax’s egg salad pizza.

“Yeah, that’s a big joke around here,” he laments. “Though I really loved it and thought it would be really well-received. But it just bombed.”

“A friend asked him one time what was the worst thing that had ever happened to his business,” Rosenfield says, “and Larry said, ‘The egg salad pizza.’ I always laugh at that. He really loved that pizza.”

Flax says successful menu runs often are about timing. When some of CPK’s most popular items hit a lengthy sales slump, they’re removed from the menu, but sometimes they return later. The pear and Gorgonzola pizza, a hit for many years, will return in June after a two-year hiatus.

“That was a funny one: We got a lot of letters asking for it back when we took it off,” Flax says. “But the bottom line is if it ain’t sellin’, then it doesn’t have any business being on the menu.”