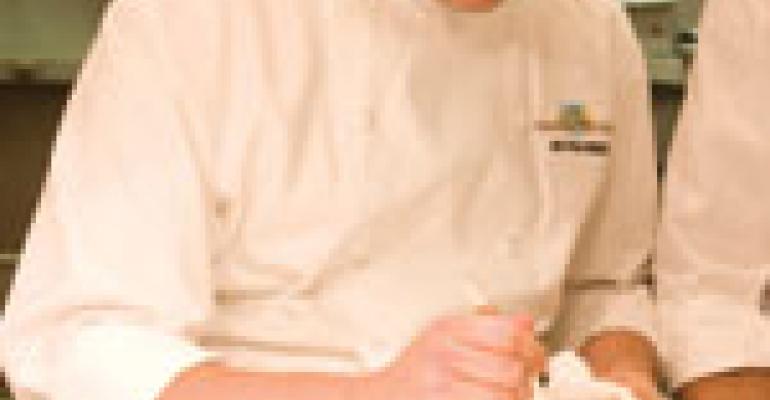 It should probably come as no surprise that the favorite new ingredients of Matthias Merges, the executive chef at Charlie Trotter’s acclaimed restaurant in Chicago, aren’t exactly items you would pick up at your neighborhood supermarket. The restaurant’s chefs are constantly pushing boundaries and exploring—in some cases, quite literally—a world of flavors.

Merges’ esoteric discoveries span the globe: grains of paradise from Africa, Korean black garlic, torch ginger from Singapore and Indian true red pepper. The true red pepper is almost unheard of in India, and there’s virtually no Korean dish that features the black fermented garlic that Merges favors. Even the one domestically sourced ingredient, unpasteurized barley miso from Massachusetts, is obscure.

Grains of paradise, also known as Guinea pepper or melegueta pepper, are an African spice in the cardamom family. It was once widely used in medieval European cooking when it was widely believed that the aromatic did indeed originate in paradise. Its fortunes waned after the Renaissance, but over the past decade or so it has experienced a rebirth as chefs have looked to ever more exotic seasonings. These days the African spice is not that uncommon on the menus of fine-dining restaurants east to west. At 231 Ellsworth in San Mateo, Calif., the chef serves a starter of shrimp and oil infused with grains of paradise; in Pennsylvania, the menu at the Bridgetown Mill House in Bucks County features a first course of duck accompanied by a grains of paradise jam.

JOB: executive chef, Charlie Trotter’s, ChicagoCAREER HIGH POINTS: “I have not yet experienced a ‘high point.’ Cuisine is an ongoing search for fulfillment.”TYPICAL BREAKFAST: scrambled eggs, Spanish chorizo, corn tortillas, black coffee and orange juiceFAVORITE SNACK: tsukemono, or Japanese picklesBEVERAGE OF CHOICE: Lustau Almacenista sherryINGREDIENT YOU’D LIKE TO FIND BUT CAN’T: Herbs and organic items that must be harvested and then used immediately, such as fiddleheads and ginkgo nuts from Japan

But no one has gone quite as far as the chefs at Charlie Trotter’s, replacing all white pepper in their peppermills with grains of paradise. Given that the grains cost at least four times the price of white pepper, it’s not a substitution everyone could afford. The switch didn’t happen overnight. “At first it was one of those esoteric spices that was around the kitchen,” Merges says, “but the more we became tuned into ingredients, we came to the realization that grains of paradise have similar characteristics to white pepper. But they are much more floral, [with] a beautiful depth of flavor.”

He says they are best for delicate preparations—fish and vegetables in particular. Though the restaurant hasn’t entirely abandoned regular black pepper, the chefs tend to reserve if for more robust game and meat preparations.

Charlie Trotter’s may be one of the few restaurants anywhere to use true red peppercorns, mainly because only minute quantities of the spice are produced. The only places where they are currently processed are a few farms in South India, says Jing Tio, the owner of Le Sanctuaire, a shop in San Francisco where the peppercorns cost $28 per pound.

They are the ripe berries of the black-pepper vine, not to be confused with so-called pink peppercorns, which are the berries of an entirely unrelated South American bush and pack none of the heat of real pepper. Normally, to produce black pepper, the berries are picked unripe and green, then sun-dried. This results in the familiar wrinkled black peppercorns.

The red peppercorns, on the other hand, are made from ripe red berries that are then rapidly dried to retain their color and their more complex aroma.

“It’s one of those items that hasn’t been manipulated to the point where it becomes generic,” Merges says. Comparing it to commonplace pepper, “it’s like tasting wild salmon as opposed to farm-raised.”

Chef Trotter and his staff first came across these flowers when visiting Singapore’s wet market. It’s known as torch ginger because the pretty pink flower bud is said to resemble a flaming torch. The scent of the blossom is reminiscent of ginger but with citrus and even apricot notes.

In Thailand and Malaysia, the shredded bud is mixed raw into salads and occasionally cooked in pungent fish curries. There is, incidentally, another kind of ginger bud used in Japanese cooking called myoga.

Yet finding an importer of the ginger flower is difficult. Merges explains that the restaurant’s Japanese fish suppliers bring it in while they’re buying fish in Malaysia.

“They have a guy that’s there at the market, and they choose some things for us that we request,” Merges says. “If it’s in season they’ll throw them in our box, and they’ll bring them in with our fish.”

The blossoms end up costing about $30 per kilo.

The kitchen can’t depend on a regular supply, but since Charlie Trotter’s only offers an ever-shifting tasting menu, that isn’t a problem. When a shipment arrives, the restaurant’s chefs design a dish around it. A recent example is a chiffonade of the blossom served with other forms of ginger, such as a ginger broth along with pickled and candied ginger.

While ginger blossoms bring a bright floral note to dishes, fermented black garlic does just the opposite, underlining the deep sweet, umami flavors of slow-braised meats. The cloves are jet black with a sweet taste somewhat like roasted garlic but with almost licorice tones. Charlie Trotter’s has used the cloves to season short ribs that were braised for 48 hours. Some of the garlic was then puréed, cooked in stock and served cold as a savory jelly.

Fermented garlic is made through a slow, low-heat curing process. It long has been used medicinally in Japan and Korea, though neither culture appears to use it in its cuisine. When introduced into the United States by a California company, Black Garlic, it was also initially promoted as a dietary supplement.

It became a sleeper hit among a select group of chefs.

In New York, Eric Ripert of Le Bernardin garnishes monkfish with black garlic, and Corton’s Paul Liebrandt uses it with tilefish. In San Francisco, Bruce Hill flavors a yogurt sauce with the cloves, then serves it with rack of lamb.

Even deeper, denser and darker in flavor is the three-year-old barley miso that Trotter’s team uses to add an earthy quality to both meat and vegetable dishes. The miso, made by South River Miso, is one of the very few American-made misos prepared in the traditional style. It is also organic and unpasteurized.

“It’s the one miso we’ve found that’s the most alive,” Merges says. “It’s very coarse. You get the pieces of grass in there; you got the nettles, the whole beans and the barley. It’s super, super complex.”

He is especially enthusiastic about using it with slow-braised meats, especially very rich Matsuzaka beef, because of the miso’s ability to complement the meat without overwhelming it. He also finds that the miso rounds out the meat’s flavor and makes it more wine-friendly.

The fact that the miso is made by a macrobiotic convert according to age-old Japanese practices is not lost on Merges.

“We really try to be conscious of what you put into your body and why certain things are [healthful] and why others are not,” he says, “but that’s a side note because it’s so damn good.”