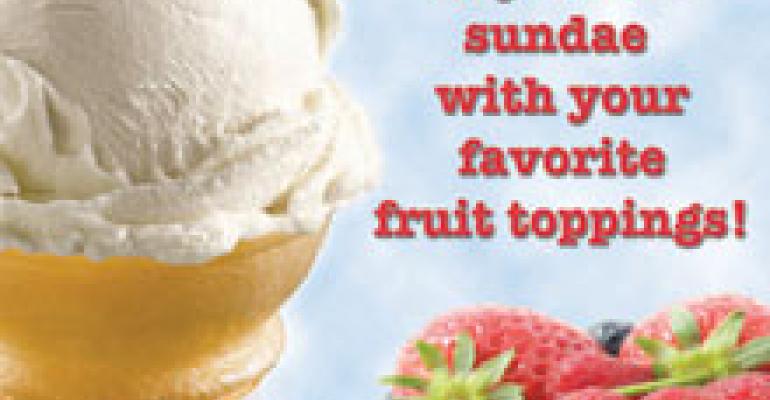 Noticing that the frozen-dessert landscape has shifted toward a more health-conscious culture, Ritter’s Frozen Custard has incorporated into its menu more cultures — the probiotic kind found in tart frozen yogurt sold at some of the nation’s fastest-growing chains.

Ritter’s, which has made its name since 1989 selling custard, rolled out a tart frozen yogurt last month in response to changing consumer tastes and increased competition from brands like Red Mango and Pinkberry.

Gary Occhiogrosso, chief development officer for franchisor Trufoods LLC, said Ritter’s franchisees are reporting strong sales of the tart yogurt and no cannibalization of the brand’s core frozen-custard lineup, which has allowed the operators of Ritter’s 31 locations to serve a market need and grow their top lines with favorable margins.

The introduction of frozen yogurt didn’t involve partnering with any new suppliers, and Ritter’s is able to procure and sell the product for the same prices as its frozen custard. The average check has remained the same since Ritter’s rolled out tart yogurt, but the appeal to more customers has benefited franchisees, Occhiogrosso said.

Frozen yogurt’s appeal with consumers is apparent in the growth of several concepts, including the 80-plus-unit Pinkberry of Los Angeles and 70-plus-unit Red Mango of Dallas, as well as Anaheim, Calif.-based Yogurtland, which has nearly 90 locations and plans to have 130 restaurants opened by year-end.

Another longtime player in the market, Salt Lake City-based TCBY, will emphasize more prominently the healthful profile of its signature product, including the presence of probiotics and active cultures, as it rolls out new locations rebranded with a more contemporary look.

For Ritter’s part, selling tart frozen yogurt not only fends off competition from upstarts like Pinkberry and Red Mango but also gives it a key point of differentiation from other chains that sell soft serve or frozen custard, like Dairy Queen or Culver’s, Occhiogrosso said.

“We’ve found that we’re the only guys out there selling probiotic frozen yogurts other than the companies that specialize with that one product,” he said.

Like TCBY, Ritter’s will sell several flavors of frozen yogurt, rather than offer only one or two varieties and then rely toppings to differentiate the flavor profiles of its products. Occhiogrosso said the yogurt is available in mango, strawberry, strawberry-kiwi, raspberry-pomegranate and red raspberry.

“The other major difference for us, since we run the frozen yogurt through a batch freezer, the product is very smooth and creamy in texture,” Occhiogrosso said. “The mouth-feel is very much like ice cream, even though it’s fat-free. It’s a very big difference from yogurt places doing soft serve, because that product is filled with a lot more air, so it’s not as richly textured.”

The tart yogurt can be substituted into all Ritter’s custard-based treats and beverages, including its shakes, sundaes and Glacier mix-in treats.