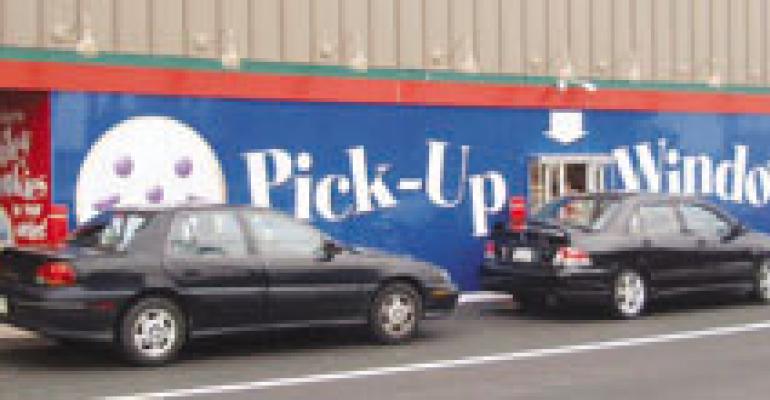 Consumer desire for convenience is not only spurring new vehicle-tied service plays, such as takeout-order pick-up windows, but also is accelerating drive-thru use into segments that previously had seen little automobile traffic.

For example, since 2004, Seattle-based Starbucks Corp. has nearly quadrupled its number of company coffeehouses with drive-thrus in the United States and Canada to 2,650. In addition, a gradually growing network of vehicle-accessible pickup windows is making news at the Eat’n Park family-dining chain of Homestead, Pa., while at the new DiCapo’s Italian Gardens To Go concept in Kansas City, Mo., the buzz is largely about value-priced pasta served in the fast lane.

“People are looking for convenience and speed, and if you don’t have to get out of your car, that makes it easier for you,” said Kevin O’Connell, senior vice president of marketing for the Eat’n Park family-dining chain.

The 76-unit full-service chain has been evaluating vehicle-accessible pick-up windows for takeout orders since October 2008. The windows, which are intended to make it easier for guests to grab phone-ahead orders, amount to a back-to-the-future move of sorts, as the full-service chain had served patrons in cars by way of a drive-in format until the 1970s.

The Eat’n Park restaurant in Monroeville, Pa., was the first to get a pick-up window, followed by units in Rostraver and South Hills Village. The next installation is slated for a restaurant scheduled to open in May in the Fox Chapel borough of Pittsburgh, O’Connell said.

Eat’n Park has tested curb-side service at some restaurants, but O’Connell confirmed that the concept never really caught on with patrons.

However, when it comes to pick-up windows, “we’re finding that all the feedback from guests is that it is very good,” he said. “They love it.”

O’Connell declined to disclose if pick-up windows contribute to incremental takeout sales. Asked about the cost of adding them to new restaurants or retrofitting them into established units, he replied, “It is a lot less than a remodel.”

Eat’n Park is “always looking at takeout, which is a growing part of our business,” O’Connell said, adding that takeout orders now generate about 5 percent of the chain’s systemwide sales, which totaled about $185 million in 2008.

“Last year we made our bags perform better,” O’Connell said of Eat’n Park’s effort to increase the holding capacity and rigidity of its takeout packaging. Lately, he added, “we’re working on improving order accuracy.”

The marriage of drive-thru-only service with pasta and pizza, two foods not normally associated with dashboard cuisine, at the new DiCapo’s Italian Gardens To Go in Kansas City, Mo., is another example of innovation by operators striving to serve hungry motorists better. The concept, which opened last September in a converted 550-square-foot drive-thru coffee outlet, was inspired by the Italian Gardens dinnerhouse that ended a 78-year run in the same city in 2003.

The restaurant offers a limited menu of appetizers, sandwiches, pizza by the slice, pastas in single-serve portions and family “buckets,” soft drinks, and cookies. To reduce development costs and better control food quality, the restaurant has limited production and storage facilities and is supplied with finished or partially prepared foods by a commissary using products from DiCapo Foods. The company also sells to chain and independent grocers, casinos and specialty stores.

DiCapo said plans call for opening another two restaurants during the next 18 months and, ultimately, a build-out of 10 restaurants in the Kansas City region within five years.

Italian Gardens To Go users pull into an order lane on one side of the building, scan a menu watched over by the colorful “Ciao Man” cartoon mascot, and request their foods and drinks before pulling up to pay. They then motor around to the pickup area on the other side of the building, which rests on an 8,000-square-foot pad.

Average service times are “about five minutes during peak periods,” said DiCapo, who added that the recent per-vehicle check average was running about $11.

“We projected $350,000 in sales the first year, and we are on track to not only reach that mark but exceed it by 20 percent at current sales levels,” he said.

During high-traffic hours, DiCapo said, Italian Gardens To Go has a cashier, a pizza-salad-station worker, two cooks and an expediter. He said keeping the restaurant adequately stocked on busy days can be a challenge but noted that a walk-in cooler and freezer will be added to the next prototype.

The remodel and equipment needed to open the first DiCapo’s Italian Gardens To Go cost about $80,000, DiCapo said. He noted that he expects to spend about $250,000 per unit going forward and is leaning toward the use of prefabricated buildings for several reasons, including depreciation benefits and the ability to move an operation if its location “proves unproductive.”— [email protected]