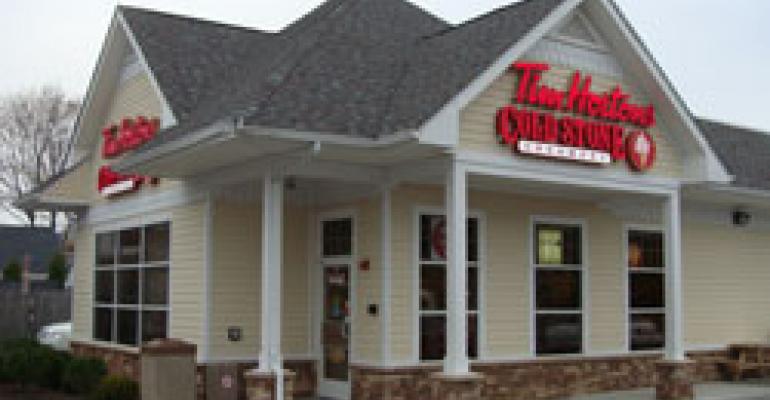 SCOTTSDALE Ariz. Cold Stone Creamery is pushing ahead with the growth of dual-branded units and new menu items to drive sales in 2010.

The more than 1,450-unit premium ice cream franchise chain has a slew of new products planned for 2010, including ice cream cookie sandwiches to be sold in four packs. It also plans to continue growing combined units with both candy maker Rocky Mountain Chocolate Factory and Canada-based, fast-casual chain Tim Hortons.

Dual branding, product innovation and brand licensing have been key initiatives launched by Dan Beem, who stepped into the role of president at Cold Stone in late 2007, a few months after the brand merged with Scottsdale, Ariz.-based Kahala Corp., a multi-brand franchisor with 12 foodservice brands in its portfolio.

In an interview with Nation’s Restaurant News on Thursday, Beem said economic headwinds took their toll last year, resulting in store closures that left the chain with a net loss of 16 locations. Sales, however, were only “slightly down” at the end of 2009 compared with the previous year.

“It was a rough year for everyone, but we fared better than most for the category,” said Beem.

Looking forward, new product introductions scheduled for this year and the success of dual-branded locations promises to spark new growth for the chain, he said.

In late 2008, Cold Stone announced the test of co-branding, combining the ice cream chain with both Rocky Mountain and with Tim Hortons locations.

Beem said existing franchisees who added products from either the Rocky Mountain or Tim Hortons brands increased their average unit volumes by between $75,000 and $100,000 last year.

“We couldn’t be more pleased with those relationships,” said Beem of the co-branding opportunities.

Currently, there are 13 domestic Cold Stone locations co-branded with Durango, Colo.-based Rocky Mountain Chocolate Factory. Beem said the company hopes to have another 50 open before the end of 2010.

Most of the existing Cold Stone-Rocky Mountain units are conversions, and some were built as dual-brand units. Cold Stone franchisees that added Rocky Mountain products reported same-store sales increases of between 14 percent and 16 percent last year, he said.

While officials initially were concerned that customers coming in for ice cream would instead trade over to chocolate, Beem said that wasn’t the case. “We saw incremental sales increases and it was a win for everybody,” he said.

The benefit of the dual branding is that the chocolate helps build sales during colder winter months, when ice cream may not be top of mind, said Beem.

The same argument was applied to the Tim Hortons co-branding, which now tallies 68 locations in the U.S.

Tim Hortons, which is known for its premium coffee, baked goods, soups and sandwiches, tends to drive traffic during morning and midday hours, where ice cream tends draw customers in the afternoons and evenings. Together, the two brands allow for broader daypart sales.

Four of the U.S. units are Cold Stone locations offering Tim Hortons products, but the remaining 62 are Tim Hortons that have added Cold Stone Creameries.

The company expects to see another 30 dual-brand Tim Hortons/Cold Stone conversions this year, and the company is also looking for franchisees that will build ground up co-branded locations.

When asked whether Cold Stone would be looking for other brands for similar partnerships, Beem said, “I won’t rule out other co-brands, but there are none on the horizon right now. It’s rare to find two brand with comparable brand equity.”

The cupcakes included a chocolate shell, filled with a sponge cake and topped with ice cream molded to look like cupcake frosting. Initially sold as a limited-time offer, the product has been added to Cold Stone’s permanent menu.

“Novelties are becoming a large part of what ice cream consumers are buying these days,” he said.

This year, Cold Stone is planning promotions around the notion of ice cream cookie sandwiches.

Starting Feb. 3, stores will debut new ice cream sandwiches made with par-baked chocolate chip cookies and made in stores with various ice cream flavors. The cookies will be available for $8.99 for a four pack.

In the second quarter, Beem said the chain will offer an ice cream flavor designed to taste like the cream inside an Oreo cookie. In a partnership with Oreo-maker Kraft, Cold Stone will also offer ice cream cookie sandwiches made with oversized Oreos and the Oreo cream ice cream, which will be dubbed “Double Stuff.” Those will also be priced at $8.99 for a four pack.

During the third quarter, which includes the summer months, Cold Stone will promote fruit flavors, such as peach and key lime. In the fourth quarter, the chain is planning to promote the ice cream pies and cakes for $12.99, similar to what was done in 2009.