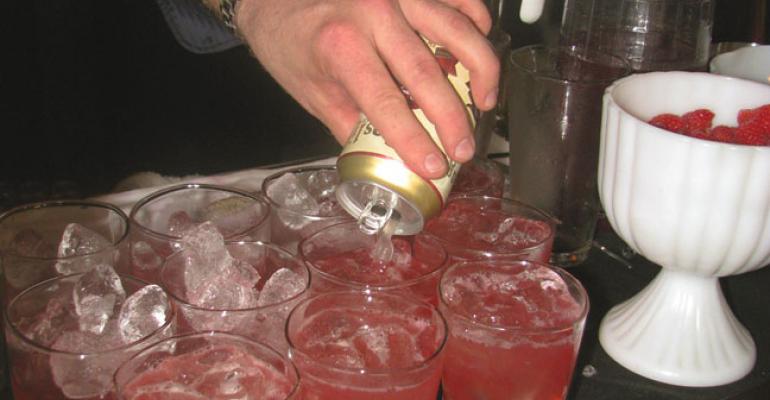 The panel discussion was one of many during the Manhattan Cocktail Classic, a cocktail event that brought together consumers and trade professions May 14-18 in New York.

Allen Katz, beverage consultant and director of mixology and spirits education for distributor Southern Wine & Spirits, said some bars and restaurants were reluctant when it comes to making more involved cocktails. "It's rote process," he points out. "And successful bar programs tend to make the same cocktails over and over again."

Katz always advocates that the staff should get comfortable with using a jigger or some kind of measuring tool, which makes it easier for them to learn and consistently make more involved drinks.

"Yet 95 percent of the time there's some pushback," he said. "I guarantee you bars lose money when they don't measure."

John Fischer, associate professor of hospitality and service management at the Culinary Institute of America, said that while measuring may seem cumbersome, it was vital in running a bar smoothly and efficiently.

He asked the crowd at the panel discussion if they have ever seen a bartender make a drink and then throw away the small amount left in the shaker.

"That's a half of an ounce of booze, and at the end of the day, a bottle of vodka," he said. "That's [the cost of] a part-time employee."

Another way to keep the bar running smoothly is to limit the number of cocktails on the menu, Katz said. That way the staff has fewer drink to memorize and master.

"It's simple memory capacity," he said. "They should really begin to make eight to ten drinks excellently from memory."

Thierry Pradines, director of wine and spirits for hospitality company Restaurant Associates, said, "A restaurant has to know what they can achieve with food and it's the same with cocktails."

When Pradines first learned about plans for the "Big Bambú" exhibit at the Metropolitan Museum of Art in New York, which features a large rooftop maze of bamboo, he started to think up cocktails inspired by the exhibit in anticipation of large crowds that would frequent the museum's Roof Garden Cafe and Martini Bar.

He created only three new cocktails to keep the menu simple, and those three drinks ended up accounting for 75 percent of alcoholic beverage sales.

The panel agreed that simplicity doesn't need to happen at the expense of innovation. In fact, the creative use of ingredients is another strategy for balancing practicality with ingenuity.

Pradines said that with the large volumes of customers that Restaurant Associates deals with at its venues, any drink requiring more than four steps or ingredients is too complicated for the menu.

One of the three cocktails he created for the Big Bambú exhibit used simple syrup, ginger, vodka and oolong tea. The ginger was infused in the vodka and the tea was made in batches beforehand, which cut down on prep time at the bar while still delivering a drink with complex flavors.

While thoughtful use of ingredients and clever techniques can alleviate some pressure behind the bar, the panelists noted that it was always important to take care of guests on busy nights.

"Offer a complimentary drink if you're that busy," Katz suggested. A simple gin and tonic or another non-intensive cocktail will keep the guest around to order another drink.

Fischer said something even as simple as a free glass of sparkling wine also does the trick.

"If they want a mojito, push them towards a variation that's simpler," said Ame Brewster, beverage manager for Myriad Restaurant Group, a strategy that helps the guest feel like they're receiving special attention even if they cannot have the drink they originally wanted.

"People who order drinks that take a long time take that into account," Fischer said.

A large part of the attraction to the handcrafted cocktails is the skill of the bartender. An engaging and well-trained staff can manage guest expectations.