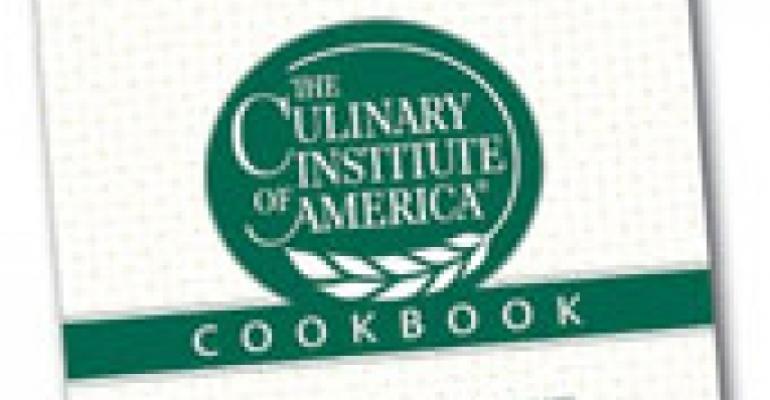 NEW YORK Culinary Institute of America Cookbook,” published by Lebhar-Friedman Books, a sister company of Nation’s Restaurant News, has been named Book of the Year in the general cookbooks category of the National Best Books 2008 Awards competition. —“The

The cookbook, which was released Sept. 1, offers the home chef a compendium of the CIA’s all-time favorite recipes selected from previously published cookbook titles. “The Culinary Institute of America Cookbook” features more than 375 favorite recipes, along with tips and preparation techniques used by one of the world’s premier culinary schools. Whether it’s for shopping for fresh produce, planning for a Sunday brunch, adding gourmet glamour to weekday meals or preparing one-dish platters, the cookbook offers something for every culinary occasion. —“The

“I think this book will help people who have a broad array of interests,” said Nathalie Fisher, director of intellectual property. “It’s also a good price point [$39.95] for a really nice, substantial book.” —“The

The cookbook opens with a “Prior to Cooking” section and then introduces its compilation of recipes, which are organized into eight chapters devoted to beverages and snacks; appetizers and salads; broths and soups; pastas, casseroles and light fare; main dishes; vegetables and side dishes; egg dishes and griddle cakes; and baked goods and desserts. —“The

Readers will find a diverse list of recipes, ranging from dishes like Thai-style fresh-pea soup, seared scallops with fiery fruit salsa and Albuquerque grilled pork tenderloin, to brunch classics like banana pancakes with blueberry maple syrup, or to something new, such as a robust potato-filled Spanish tortilla. Other recipes include pastries like cherry cheese baskets and sticky buns with pecans, and desserts from the grill, such as candied kumquats or bananas Foster tartlets. —“The

The book also boasts an appendix with charts and tables available to use as a reference while cooking, and a collection of photographs culled from other CIA cookbooks grouped into four sections. —“The

“I really enjoy the photos being together,” Fisher remarked, noting that viewing them as a cluster heightens her sense that “the colors pop and you just sort of want to eat everything.” —“The

Everyone can benefit from the new cookbook, Fisher said. —“The

“We have customers from all over at all different levels of cooking,” she said. “We’ve got some people who are just learning how, and we’ve got others who have been cooking their whole lives.” —“The

In addition to the book’s far-ranging recipes, the tips and techniques section offers useful advice. Fisher noted such tips as the proper way to open Champagne bottles. —“The

“You may have been opening champagne your whole life, but maybe there’s a better way to do it,” she said. —“The

The all-in-one nature of the cookbook is perhaps its best feature, Fisher said. With more and more home chefs cooking on the go, fewer want to spend time searching through their cookbook library for the title containing the specific recipe they desire. —“The

“It just makes life easier,” she said. “Now you’ve got the ‘best-of’ right in front of you, all compiled into one.” —“The