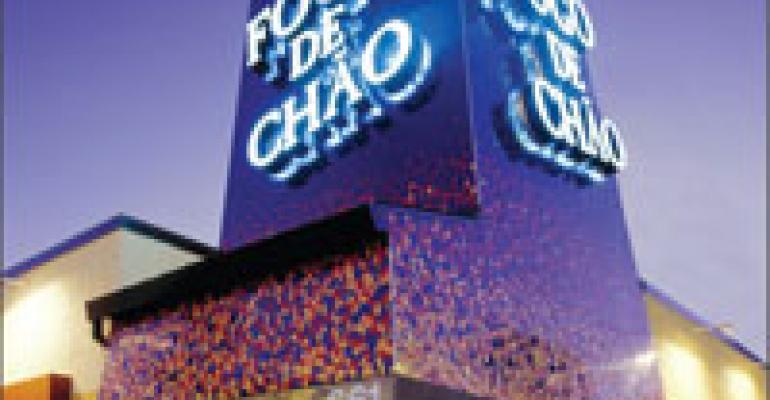 Churrascaria chains carve out a niche in pro-protein markets

Brazilian-inspired steakhouses and all-you-can-eat Argentine-style churrascarias continue to grow in number and variety, drawing herds of patrons to menus of skewer-cooked meats accompanied by arrays of salads, side dishes and desserts.

Joining such established churrascaria chains as the 14-unit Fogo de Chão and 11-unit Texas de Brazil, both based in Dallas, are newcomers like Amor de Brazil Fiery Steakhouse, a concept devised by Copeland Investments Inc. of Metairie, La.

The churrascaria menu has even spread into the fast-casual category, with such concepts as the Pampas Grill in Los Angeles’ landmark Farmers Market drawing long lines of patrons to its cafeteria-style offering of salads, pastas, and such signatures as rotisserie beef, lamb and chicken. Unlike sit-down churrascarias, Pampas Grill’s patrons pay by the pound and regulate how much they eat at the point of purchase.

The growth in the churrascaria category is not surprising, said Chris Tripoli, owner of the A’La Carte Foodservice Consulting Group in Houston.

“The Latin influence has been steadily growing in many areas of our current lifestyle—music, clothing, design as well as food—because it represents fun,” Tripoli said. “More specifically, the churrascarias answer the ‘what’s next’ that the dining public is always asking. We have been eating more protein [in expensive steakhouses] for the last 15 years or more, but these concepts answer our need for that in a different and more entertaining way.”

Populated liberally through the heartland are such concepts as Tucano’s Brazilian Grill in Albuquerque, N.M., and Provo, Utah, and Amor de Brazil, which opened a franchised unit two months ago in Kansas City, Mo., a year after the Copeland-owned flagship debuted in Cincinnati.

Churrascarias also have the potential for handsome check averages. Fred Thimm, the new president and chief executive of Copeland’s restaurant division, said Amor de Brazil generates a higher per-person check average than Copeland’s three other concepts, leading the pack at $45-$50, versus $25-$26 for Sweet Fire & Ice, $22-$23 for Copeland’s of New Orleans and $24 for Cheesecake Bistro.

Churrascarias are based on a cooking style pioneered by the ranchers, or gauchos, who settled in Argentina and southern Brazil in the early 1800s. The ranchers would gather around the embers of a wood-burning fire, cook skewered meat, slice off pieces and divided them among plates.

“Operators I know tell me that even though it is an all-you-can-eat service, guests do not feel the same way they do in a buffet or the more common all-you-can-eat Friday fish fry,” consultant Tripoli said. “The difference is that churrascarias offer a variety of [four or five meat] items and continually provide small samplings rather than piling on a large quantity of the same item as we find in the old-fashioned, all-you-can-eat scenarios.”

Profitability lies in the volume of business, he added.

“These operators will accept the higher product cost because of the equally high-dollar gross profit,” Tripoli said. “It is hard to run a food cost lower than 40 [percent] to 42 percent with a menu full of high-quality proteins. But with high unit-sales volume, per-person check averages of $35 or more, and bar sales that equal 25 percent or more of their total sales, operators are quite able to maintain good unit profitability.”

That has led several operators to expand beyond their home cities.

Salim Asrawi, owner of Dallas-based Texas de Brazil, has seen widespread interest in franchises of his churrascaria concept, but he has kept it a company-owned business. He opened three locations in the past year, bringing the domestic total to 10, with one international branch.

A second-generation restaurateur, Asrawi earned a master’s degree in restaurant and hospitality management from Johnson & Wales University and has held executive roles at the Tropicana Hotel in Atlantic City, N.J., and the Ritz-Carlton in Los Angeles’ Marina del Rey. He opened the first Texas de Brazil in 1998 in the Dallas suburb of Addison, Texas.

“We saw an opportunity because there were very few places like the churrascaria in the United States,” Asrawi said. “We decided to bring the concept here, refine it and give guests a complete dining experience with close attention to the decor and the ambience. We kept it true to the Brazilian style, where the meat is brought straight from the fire to the table. The recipes and the menus are similar [to what] you will find in churrascarias in Brazil. What we have added here is the upscale element, and the emphasis on customer service. That is a key to our success.”

“Competition is great and it’s healthy,” he said.

Brazilian émigrés opened the nearby Rafain churrascaria in Dallas in September 2005. It is owned and operated by the Rafagnin family, which also owns seven hospitality-related businesses in Brazil, including restaurants, a hotel and a nightclub.

Nevio Rafagnin Jr., vice president of operations of Rafain and a third-generation restaurateur, said, “Our goal is to bring a small slice of Brazil to North Texas in a casually elegant, friendly environment.”

The churrascaria operators from Brazil say they feel an obligation to serve as ambassadors for their home countries.

Jair Coser, who founded the Fogo de Chão chain—which has nine U.S. units from Baltimore to Beverly Hills—said, “I have dedicated my life to bringing authenticity and the true flavors of Southern Brazil to the U.S.”